A new programme supported by UN Women in Kazakhstan is demonstrating a multi-disciplinary approach to addressing violence against women. More cases of sexual abuse and domestic violence are being reported, specialized centres have been set up in each district to provide comprehensive services for survivors. 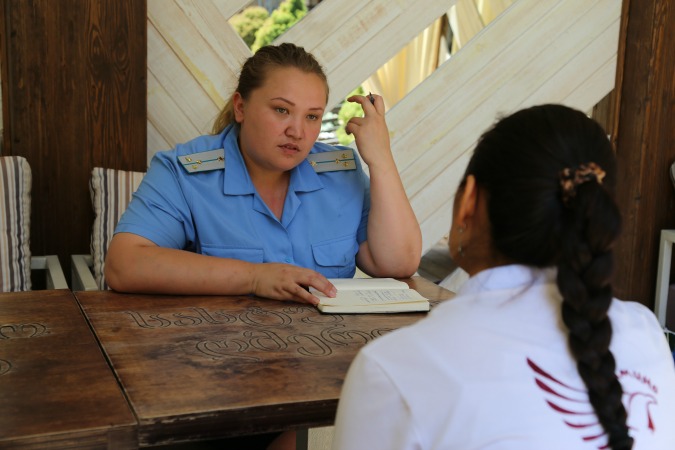 Imagine a team of specialists—a lawyer, a police officer, a psychologist, a doctor and a social worker, led by the Senior Assistant to the General Prosecutor—visiting women survivors to offer all the services that they might need to leave an abusive situation and to overcome trauma. It may sound too good to be true, but this very scenario is happening right now in Kazakhstan, as part of a joint project by UN Women and the General Prosecutor’s Office (GPO), funded by the Government of Kazakhstan.

According to the General Prosecutor of the Republic of Kazakhstan, in 2016 alone, every third murder took place in the family, and as a result of domestic violence, 36 women died and 742 women committed suicide. Some 2481 cases of violence against women and girls were registered last year—just the tip of the iceberg, as many survivors continue to suffer in silence.

In 2016, the UN Women Multi-Country Office in Kazakhstan assisted the General Prosecutor’s Office in developing a multi-sectoral plan titled, “Kazakhstan Free from Domestic Violence”. The plan includes alignment of national legislation with international standards and best practices in prevention and response to domestic violence—a commitment that the Government of Kazakhstan had announced as part of UN Women’s Step It Up for Gender Equality campaign in 2015. It also strengthens inter-departmental cooperation and builds a comprehensive system of support for survivors of violence, including legal advice, psychological help, shelter and information services.

The plan is being piloted in the south of Kazakhstan, the most populated and conservative region, from June to August, with a second phase planned to run through September and October. Within just one month, the multi-disciplinary project team covered 37 towns and villages and engaged almost 20,000 women and men. As a result, 14 new cases of sexual abuse and more than 300 cases of domestic violence were reported to the authorities. To raise public awareness and educate the young people, 22 trainings were held for more than 3,000 youth on the topics of gender-based violence, gender equality, reproductive health and human rights. 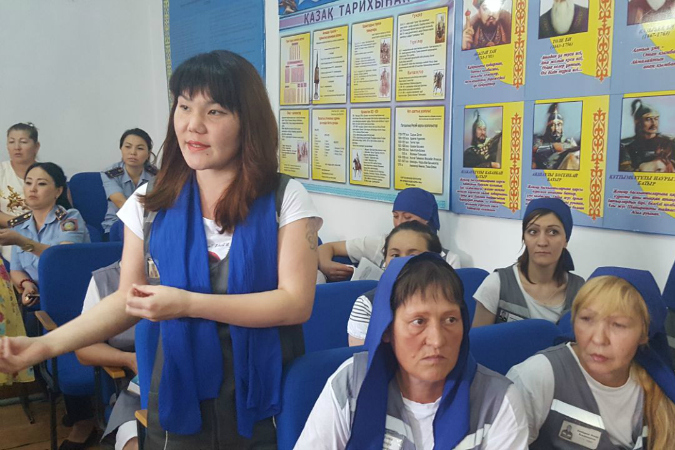 Aliya Assanova*, a 32-year-old mother of seven children, is among the survivors who have benefited from the project. Born in the rural region of Turkestan in South Kazakhstan, she was kidnapped for marriage and taken illegally to Uzbekistan. The first time she was beaten by her husband was eleven years ago. Many more beatings have followed since, and Assanova has tried to commit suicide twice.

“As a mother of seven children, I am entitled to receive subsidies from the Government, but my husband would not allow me to go anywhere as he was jealous,” recalls Assanova. “I kept silent because I thought no one could protect me. If I had known differently, I could have changed my life earlier.”

In 2017, Assanova managed to flee to Shymkent, another town in south Kazakhstan, with her five children, where she heard about the “Kazakhstan Free from Violence” team touring the region. She contacted them and received legal advice, along with medical treatment and psychological counseling. She was also able to apply for government subsidies to support her family.

Aigul Serikova*, 56 years old, also stayed silent for many years. She was regularly beaten by her 34-year-old son, but felt ashamed to tell anyone. It was only when she heard about the General Prosecutor’s Office encouraging women to speak out that Serikova shared her story. The project team is taking a closer look at the issue of violence towards older women.

Saltanat Tursynbekova, Senior Assistant of the General Prosecutor, hopes that the project will enable the authorities to identify key gaps in their work: “Maybe the problem is in the work of the relevant government agencies, maybe it is not only because women keep silent and are afraid of speaking out. We really want to hear from women, we want to see what we should change and where we need to invest more.” 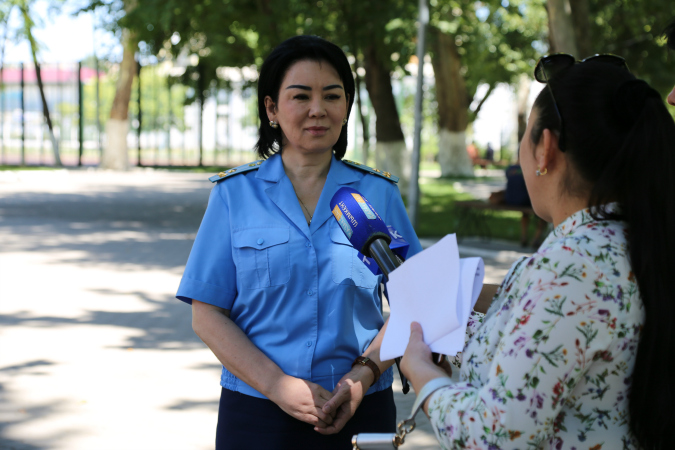 “Violence against women is both a cause and a consequence of gender inequality and has direct costs on the democratic and economic development of a country,” says Elaine Conkievich, UN Women Representative to Kazakhstan, Tajikistan, Turkmenistan and Uzbekistan. “UN Women commends the political will and efforts made by the Government of Kazakhstan towards ending violence against women and children.”

The Government of Kazakhstan has already taken several measures to continue addressing the issue well beyond the length of the pilot project. Dedicated centres to work on violence-related issues have been established in each district of South Kazakhstan, including a free social and psychological centre for women survivors in the ToleBi district. A new Department for Family Affairs in the South Kazakhstan region will drive the implementation of progressive policies for women, youth and families. Soon anyone applying for a marriage certificate in Kazakhstan must complete a mandatory educational session on domestic violence.

*Names have been changed to protect the identity of the survivors.