Press Release: UN Women and the European Union launch new initiative to focus on ending violence against women and girls in Kosovo 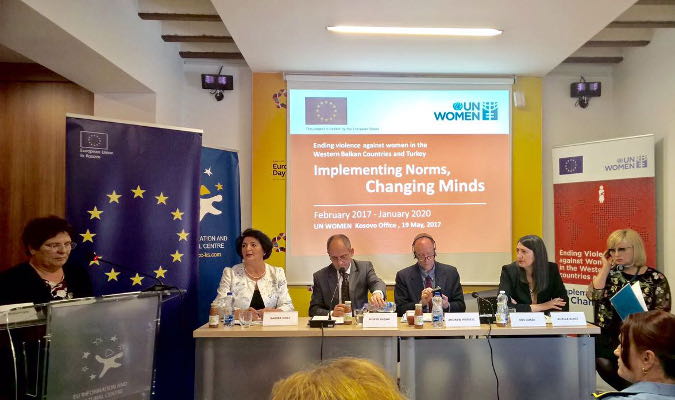 On Friday, 19 May 2017 UN Women and the European Union (EU) conducted a high-level inception workshop at the EU Information Centre of Pristina to launch the country-level component of their Programme Ending Violence against Women in the Western Balkans and Turkey: Implementing Norms, Changing Minds. This regional initiative, funded by the EU, aims at combatting violence and discrimination against women and girls in the Western Balkans; namely Albania, Bosnia and Herzegovina, the former Yugoslav Republic of Macedonia, Montenegro, Kosovo[1] and Serbia; and Turkey. Guest speakers included the Deputy Minister of Justice, the UN Development Coordinator, the Agency for Gender Equality, EU and UN Women officials, and representatives of civil society organizations.

Ms. Flora Macula, Head of Office for UN Women Kosovo, opened the discussion by reminding that 68 percent of Kosovan women had experienced domestic violence in their lifetimes and that 21 percent of Kosovans say ‘’sometimes it is okay for a husband to hit his wife’’ according to a 2015 study[2].

Civil society organizations together with UN Women Kosovo put a spotlight on the issue of domestic violence and reiterated that it should be of public concern. ‘’We will continue to support the advocacy work to raise awareness on discrimination and gender-based violence and support the institutions' referral system and implementation of quality services for survivors,’’ stressed Ms. Macula.

Ms. Selma Cekic Dincsoy, the EU Gender Focal Point in Kosovo, renewed EU’s trust in Kosovo’s institutions while emphasizing the need for strong national norms to fight domestic violence. As emphasized by Mr. Andrew Russell, UN Development Coordinator and UNDP Resident Representative, ‘’Kosovo’s political, economic, social and cultural progress remains subject to the ability of its leaders and key actors to end violence and discrimination against half of its population.’’

Mr. Munir Basha, the Deputy Minister of Justice and Domestic Violence National Coordinator, expressed his strong commitment to create a ‘’zero-tolerance environment against domestic violence.’’ Mr. Basha reminded about the national mechanisms that have been established through legislation, such as the launch in April 2017 of a National Strategy for the Protection against Domestic Violence and its complementary 2016-2020 Action Plan. The Domestic Violence National Coordinator concluded its statement by stressing his Office’s commitment to ensure the freedom and equality of all citizens and to cooperate for the effective implementation of the strategy in all sectors concerned.

An important component of the programme in Kosovo is to establish a database of survivors of domestic violence, said Ms. Edi Gusia, Executive Director of the Agency for Gender Equality. Ms. Gusia stressed the key role held by local governments in the management of domestic violence cases, and on the necessity to empower social work centers, shelters and police units without waiting for the State to provide all the support. ‘’Decentralization is key’’, she concluded. In line with this approach.

Ms. Linda Sanaja, UN Women Technical Project Analyst, emphasized the necessity to implement this programme in close cooperation with civil society organizations as key partners and drivers of change on gender equality and ending violence and discrimination against women and girls. Ms. Ruzica Simic, Executive Director of the NGO Zensko Pravo (Women’s Rights), and Ms. Sakibe Doli, Executive Director of the shelter Safe House, were invited to share their experience in working directly with domestic violence survivors. Among other remarks, Ms. Simic urged leaders, including women leaders, to increase their awareness on women’s rights and better defend them.

[2] Kosovo Women’s Network, No More Excuses, An Analysis of Attitudes, Incidence, and Institutional Responses to Domestic Violence in Kosovo, 2015, page 5.