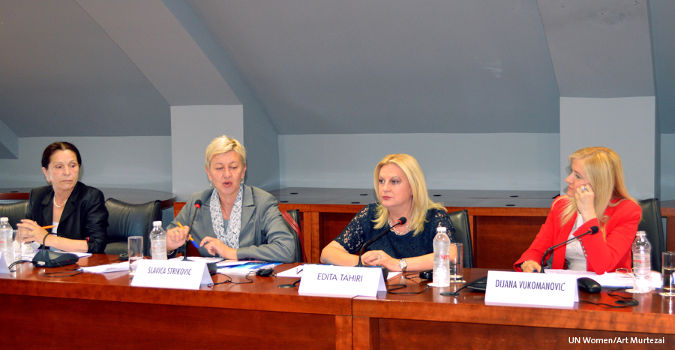 Kosovo is still undergoing post-conflict transformation more than 15 years after hostilities ceased in 1999. Kosovo faces many gender equality challenges in leadership and political participation, the economy, ending violence against women and in peace and security. Survivors of conflict-related sexual violence remain stigmatized, and a culture of shame and silence surrounds the issue.

Conflict and crises have devastating consequences and often exacerbate gender inequality between women and men. Aside from being targeted through war tactics, such as sexual violence, women and children frequently make up the majority of displaced and refugee populations.

Traditional views on gender roles have left women in Kosovo under-represented in decision-making at all levels, including the security sector, although some major improvements have led to more women in the Kosovo Police.

Women’s participation is vital to effective and sustainable peace. Yet, though women have led peace movements and driven community recovery after conflict, they are almost completely missing from peace and reconstruction negotiations. This exclusion limits their access to opportunities to recover, gain justice for human rights abuses, and participate in shaping reformed laws and public institutions.

Since 1999, UN Women has promoted to governments and civil society women’s participation in conflict prevention and resolution, decision-making and to ensure their access to justice. UN Women in Kosovo collaborates closely with civil society, government and women’s groups to support activities and programmes that focus on peace and security and engendering humanitarian action.

UN Women peace and security programmes are guided by a series of international commitments to human rights. These include the Beijing Platform for Action, the Convention on the Elimination of All Forms of Discrimination against Women (CEDAW), and UN Security Council Resolution (UNSCR) 1325. Adopted in 2000, UNSCR 1325 calls for women to participate in peace building, be better protected from human rights violations, and have access to justice and services to eliminate discrimination.

UN Women in Action in Kosovo

UN Women provided legal consultants to support the creation of AGE under the office of the Prime Minister. It trained AGE staff and ministerial and municipal gender officers, and helped AGE develop and monitor the Kosovo Programme for Gender Equality.

UN Women worked closely with the government on the Action Plan on the Implementation of UNSCR 1325. Launched by the Agency for Gender Equality on 7 March 2014, the plan includes three outcomes: increasing women’s participation in decision-making; integrating a gender perspective in the security sector and increasing the number of women in security structures; and providing redress to survivors of conflict related sexual violence.

The SGG has marked International Women’s Day, organized joint campaigns for the 16 Days of Activism against Gender-based Violence, issued joint statements, and organized public consultations. The group has two functioning sub-groups, one on gender based violence and one on conflict related sexual gender based violence.

Members are prominent and inﬂuential women in politics and women’s human rights activists from Albania, Bosnia and Herzegovina, Croatia, Kosovo, the former Yugoslav Republic of Macedonia, Montenegro and Serbia who are committed to inclusive human security, breaking the barriers of ethnocentric politics, the promotion of women's rights and gender equality, and women’s participation in decision-making processes. The Chair of RWL SEE is Edita Tahiri, Minister for Dialogue, Kosovo, ex Deputy Prime Minister of Kosovo and Chief Negotiator to Implement the Brussels Dialogue.

RWL SEE regularly meets to recommend ways to increase women’s role in peace and security in the Balkans: