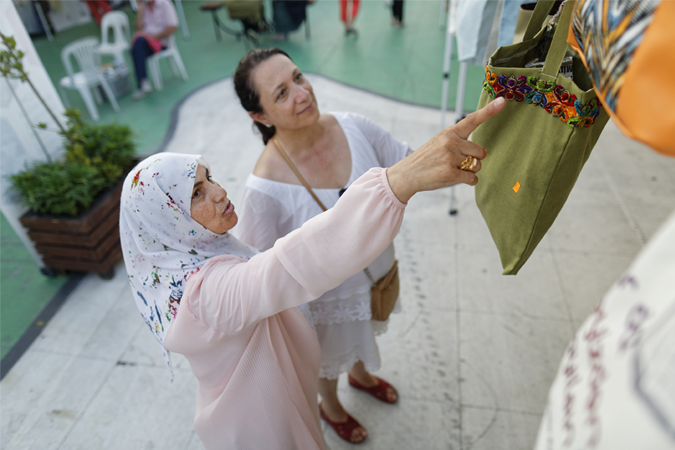 A bridge between Asia and Europe, Türkiye has had migration flows throughout its history. Traditionally a transit country for migrants, Türkiye is now also a destination country. Following the outbreak of the Syrian Crisis in 2011, as of August 2022, Türkiye hosts the largest number of refugees in the world, including some 3.65 million Syrians registered under Temporary Protection status. Women account for 1.7 million (46 per cent) of Türkiye’s Syrian refugees. Around 2.2 million (60 per cent) are under the age of 25 and more than 98 per cent live in urban areas. Moreover, nearly 300. 000 non-Syrian individuals mainly from Afghanistan, Iran, Iraq and other countries as International Protection holders or applicants.

All conflicts and crises affect women and girls in different ways than men and boys. Women’s needs and interests differ, as do their resources, capacities, and coping strategies. Women are often the first responders to a crisis, and they play a central role in the survival and resilience of families and communities. A gender-sensitive refugee response is essential to address the specific development and humanitarian needs, priorities, rights, and capacities of women, girls, and boys.

UN Women in Türkiye works to strengthen the resilience of refugee women and girls, reduce their vulnerabilities, and address risks they face. UN Women participates in the Regional Refugee and Resilience Plan (3RP) in response to the Syria crisis, and supports the Government of Türkiye in meeting the most pressing needs of women and girls under Temporary and International Protection, and of vulnerable host community members.

UN Women implements programmes that benefit the most at-risk women, provides needs-based support, and promotes the capacity of women and their organizations to engage in decision-making at community, national and international levels. UN Women provides technical expertise and capacity-building to the 3RP partners on how to advance gender equality and women’s empowerment in refugee plans and programmes. In partnership with government and civil society partners, UN Women also provides assistance to address urgent needs resulting from natural disasters, such as earthquakes, fires, floods and etc.

UN Women’s Refugee Response Programme in Türkiye consists of projects implemented in partnership with local authorities in host municipalities (Gaziantep and Izmir), civil society organizations and other UN agencies. Women-only centres provide protected spaces for vulnerable women and girls from refugee and host communities, support women’s access to services and foster their leadership. The Programme also engages men and boys in community activities that challenge behaviours and attitudes that lead to gender inequality, discrimination and violence.

Since 2017, through projects financed by the European Union and the Governments of Japan, Norway and Iceland, more than 20,000 women from refugee and host communities received protection services and support for their access to livelihoods. More than 4,500 women and girls have participated in activities to promote social cohesion.

For more information about UN Women’s Refugee Response in Türkiye, see the comprehensive programme brief here and project briefs below: