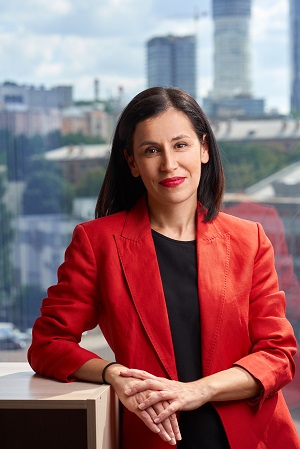 Ms. Dominika Stojanoska is the UN Women Representative to Moldova since August 2020.

Prior to joining UN Women Moldova country office, Dominika worked in Ukraine where she managed the programme portfolio of UN Women in Eastern Ukraine between 2018-2020 and was acting as the Head of Office ad interim from January to July 2020. Dominika’s career with UNIFEM/UN Women initiated in North Macedonia, where she was the Head of the Office for more than 7 years. Dominika has over 15 years of work experience in the area of development, human rights and gender equality.

She started her work experience at the Institute for Central and Eastern Europe of the University of Bologna in 2001 and managed projects focusing on the Inter-university cooperation in the frame of the Adriatic Ionian Initiative, promoted within the EU Stability Pact for South-Eastern Europe. Dominika holds B.A. in Political Sciences and a PhD in International Relations and Sustainable Development Policies, with research on gender and development.

She is native Macedonian and speaks English, Italian, French and Serbian language.

Speech: Pushing boundaries, together with our partners
Call for Proposals: Support to improved performance and increased capacity among shelters for victims of gender-based violence
In the words of Elena Biceva: “By taking care of ourselves, we can help even more”
In the words of Larysa Denysenko, a Ukrainian legal expert: “Sexual violence is a tactic of intimidation, torture and humiliation”
From Where I Stand: “We need women’s voices for a sustainable marine life and fisheries sector.”
END_OF_DOCUMENT_TOKEN_TO_BE_REPLACED