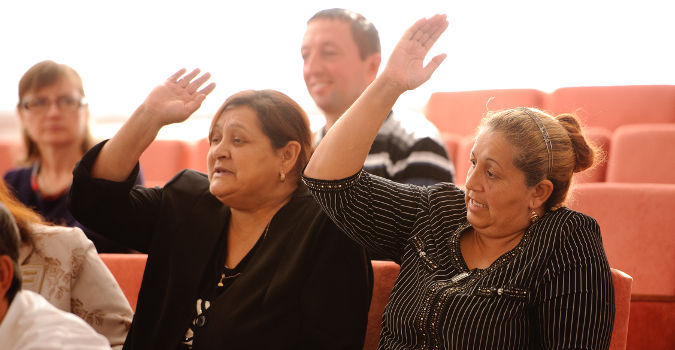 National plans, policies, institutions and budgets are where governments begin to translate commitments to women into practical steps towards gender equality. Too often, however, they fail to ensure that public services respond to women’s needs and priorities.

Gender-responsive budgeting is an innovative public policy tool that comprehensively assesses gender funding gaps and identifies actions to close them. It addresses gender bias and discrimination by analysing government budgets to ensure that national commitments to gender equality and women’s empowerment are adequately funded.

Since 2008, UN Women in Europe and Central Asia has piloted gender-responsive budgeting initiatives that have contributed to gender-responsive policy planning and budgeting being used in public finance reforms and for European Union (EU) accession processes.

The countries in South East Europe and the Republic of Moldova have made integration into the EU a long-term goal. They have affirmed their commitment to gender equality and the advancement of women by revising existing laws or devising new ones. This commitment to improve the accountability and transparency of public policies has opened up unique entry points to introduce gender-responsive budgeting and apply it as a public policy tool.

The new UN Women Regional Programme, Promoting Gender Responsive Policies In South East Europe And The Republic Of Moldova, helps central and local governments in Albania, Bosnia and Herzegovina, FYR Macedonia and Moldova implement their gender equality commitments by integrating gender-responsive budgeting into planning and budgeting at all levels.

JILDP’s assistance improves Moldova’s policy and legal frameworks on fiscal decentralization. Based on JILDP-supported analysis, a new Parliament-approved law on local public finances changes radically the way local governments are funded. This strongly improves the quality and sustainability of Moldovan democracy and builds the capacity of local public authorities to implement and monitor their strategic plans, improve local public service delivery and engage women and men from local community groups, including from Moldova’s vulnerable Roma.

Meet Yaroslav, a young Ukrainian refugee with disabilities who dreams of becoming a DJ
Interview: “The war in Ukraine may be changing the women’s movement, but it’s not stopping it”
Families start businesses, redistribute chores, and transform gender norms in Kyrgyzstan
Interview: “Measuring gender equality is pivotal for making progress”
UN Women Statement for the International Day Against Homophobia, Biphobia, Intersexphobia, and Transphobia
END_OF_DOCUMENT_TOKEN_TO_BE_REPLACED