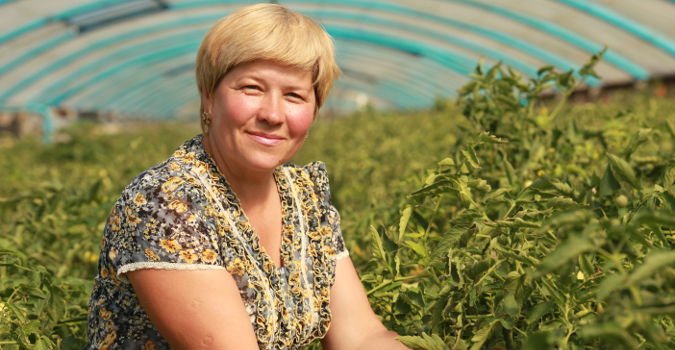 Moldovan women entrepreneurs wishing to start their own business, particularly in rural areas and marginalized communities, face barriers accessing bank loans and state-funded business and entrepreneurship development programs. Nationwide, women account for only 27.5 per cent of entrepreneurs; in rural areas this drops to 14.9 per cent. Roma women and women with disabilities are even more disadvantaged and often excluded from formal labour markets.

Gender-based stereotypes are perpetuated in education, media and advertising. Women have primary responsibility for the household and children. Education and media are key entry points to address gender-based stereotypes in Moldova, and effective policy and legislation with practical mechanisms for implementation is required to address this issue.

UN Women partners with the government, civil society organizations and NGOs in Moldova to remove barriers to women’s economic empowerment and increase women’s incomes and ability to access and secure jobs with good wages and decent working conditions.

We are guided by international commitments made to women by the government, such as The Concluding Observations of the Committee on the Elimination of All Forms of Discrimination against Women from October 2013. It specifically makes reference to intensifying efforts to enhance the economic empowerment of women in rural areas; recommends increasing access by Roma women, rural women, women with disabilities and older women to formal employment by ensuring the effective implementation of the Gender Equality Strategy (2010-2015); implementation of the principle of equal pay for work of equal value; address the challenge of overprotective maternity leave in the Labour Code and the lack of parental leave as well as different mandatory retirement ages for women and men (57 years for women as compared to 62 years for men). It also calls for improving information and data available on disadvantaged groups of women, such as older women and women with disabilities.

To increase Moldovan women’s economic empowerment, we support initiatives that:

Protecting women migrant worker’s rights is an important part of our work in Moldova. Globally, this has been shown to be critical for economic growth and development and to have had a positive effect on irregular migration and trafficking.  Our Women Migrant Workers’ Labour & Human Rights Project works to change Moldovans awareness and responses towards women migrant workers. Part of the UN Women Global Programme, and funded by the EU and UN Women, the project promotes the protection of women migrant workers’ rights to the government, parliamentarians and national human rights groups. It also helps build the capacity of women migrant worker’s organizations so they can strategically engage with and hold national stakeholders accountable.

In addition, the project will also engage with high-level global and regional inter-governmental processes, on-line knowledge platforms and forums, and the general public by using public awareness initiatives. Aiming to reach about 7,000 stakeholders in 36 months, the global programme will be anchored in three pilot countries: Mexico (Latin America), Moldova (Eastern Europe) and the Philippines (South-East Asia).

Starting in 2009, as part of the drive to empower women in the Moldovan economy, UN Women introduced innovative gender-sensitive Joint Information and Services Bureaus. The one-stop centres have helped nearly 10,000 women access a variety of public services, including job placement and business start-up services. The centres have worked so well that they are now fully funded by the national Government and fully functional in 30 out of 32 districts of the country.

We also bring together government institutions, international organizations, businesses and civil society to advance the digital literacy of women and girls, especially those from disadvantaged groups, in Moldova through targeted training, advocacy and engagement in policy dialogues on opportunities for women and girls in information and communications technology and the role of the technology in bridging the gender gap in Moldova. The platform is call GirlsGoIT and the site can be accessed here http://girlsgoit.org/

MediaForShe Congress kicks-off a dialogue on gender equality with the media in Ukraine
UN Women meets with MPs in Turkey to strengthen policymaking at the central level to achieve gender equality
Onwards and upwards for gender equality in conflict-affected eastern Ukraine
Turkish Women Olympians Make History
Op-ed: What does energy poverty mean for women?
END_OF_DOCUMENT_TOKEN_TO_BE_REPLACED