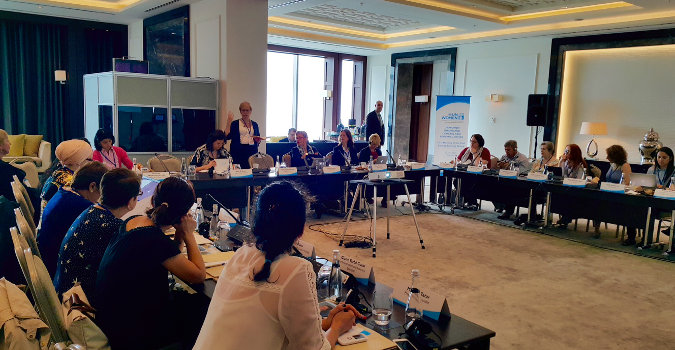 When the UN General Assembly established the United Nations Entity for Gender Equality and the Empowerment of Women (UN Women), it asked the head of the Entity to “continue the existing practice of effective consultation with civil society organizations and encourage their meaningful contribution to the work of the Entity” (General Assembly resolution 64/289). In response, UN Women has set up civil society advisory groups at the global, regional and national levels to build on existing partnerships and increase strategic dialogue with its civil society partners.

The ECA CSAG is a consultative forum for regular dialogue between UN Women and civil society in Europe and Central Asia. The group’s goals are to:

The list of ECA CSAG members can be found here.

Speech: Pushing boundaries, together with our partners
Call for Proposals: Support to improved performance and increased capacity among shelters for victims of gender-based violence
In the words of Elena Biceva: “By taking care of ourselves, we can help even more”
In the words of Larysa Denysenko, a Ukrainian legal expert: “Sexual violence is a tactic of intimidation, torture and humiliation”
From Where I Stand: “We need women’s voices for a sustainable marine life and fisheries sector.”
END_OF_DOCUMENT_TOKEN_TO_BE_REPLACED