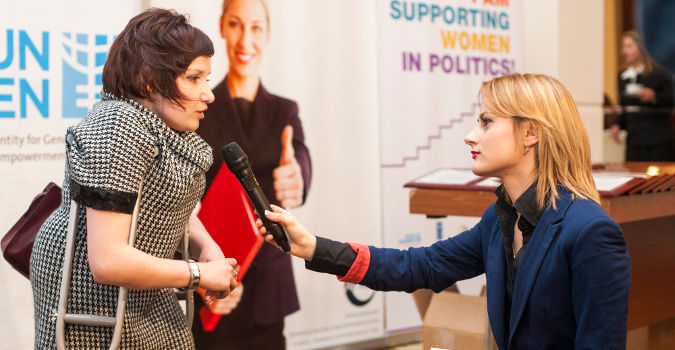 Across Moldova, women are under-represented in leading positions in the government, politics, business and civil society – despite their proven abilities as leaders and agents of change, and their right to participate equally in democratic governance.

Women's representation in Moldovan politics and decision-making is below international benchmarks. Women hold 22 per cent of seats in the Parliament, and 31 per cent in the Government, including the Bashkan of UTA Gagauzia. Women are also underrepresented at the local level holding 20.6 per cent of mayor mandates, 18.55 per cent of the seats in district and municipal councils, and 30.04 per cent in local councils. Roma women and women with disabilities are virtually excluded from representation in public life. Women are also under-represented in decision-making bodies in the private and civil society sectors.

We are guided by international commitments made to women by the government: The Convention on the Elimination of All Forms of Discrimination against Women (CEDAW) upholds women’s right to participate in public life, while the Beijing+20 Platform for Action calls for removing barriers to equal participation.

Specifically, CEDAW committee recommendations for the Republic of Moldova from 2013 called for legislating quotas for candidates on political parties’ lists and in areas where women are underrepresented or disadvantaged. The recommendations also intensified efforts to enhance the economic and political empowerment of women in rural areas.

UN Women in Moldova collaborates with the UN country team and works with civil society on programmes that support greater political participation by women throughout society.

Funded by the Government of Sweden, WiP:

Recent achievements in increasing women’s leadership and political participation include:

Women in Politics
Up one level
news

MediaForShe Congress kicks-off a dialogue on gender equality with the media in Ukraine
UN Women meets with MPs in Turkey to strengthen policymaking at the central level to achieve gender equality
Onwards and upwards for gender equality in conflict-affected eastern Ukraine
Turkish Women Olympians Make History
Op-ed: What does energy poverty mean for women?
END_OF_DOCUMENT_TOKEN_TO_BE_REPLACED