Better services for survivors of domestic violence in Kosovan municipalities

“In our municipality, domestic violence is no longer a taboo subject for women. They are aware of the legal and institutional protection and encouraged to report domestic abuse cases. They are starting to change their attitude towards the role and status of men and women in Kosovan society,” says Omer Daku, Deputy Mayor of Gjilan/Gnjilane in Kosovo (under UN Security Council Resolution 1244). 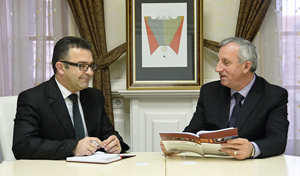 This effort to address domestic violence is urgently needed, for its continuity to be a serious problem in Kosovan society, with growing numbers of reported cases. Police register more than 1,000 officially-reported casess of domestic violence every year in Kosovo (under UNSCR 1244) which has a population of less than 2 million, according to the most recent census. Of those complaints, almost 90 per cent are from women.

Furthermore, the last representative Kosovo-wide household survey on domestic violence, undertaken by the Kosova Women’s Network (KWN) indicates that over 40 per cent of cases of domestic abuse are never reported to the police. Kosovo (under UNSCR 1244) is still a patriarchal society, but the women here over the last years have become aware of the need to report incidents and have managed to transform the issue of domestic violence from a private concern to a public and political issue.

Although the Assembly of Kosovo and the Government enacted and adopted a Law and a National Strategy on Protection against Domestic Violence in 2010, implementation is uneven. According to a 2012 report of the Organization for Security and Co-operation in Europe, there are systemic shortcomings in the implementation of the law by the courts, from the process for granting civil protection orders to survivors of domestic violence to domestic violence still not being considered a crime in the country’s penal code.

The KWN research also shows that the coordination system between institutions – police, judiciary, social services and hospitals – are weak and, even when in place, not well respected. What is also lacking is a real community-based dialogue amongst key officials responsible for putting an end to domestic violence.

Women in Kosovo (under UNSCR 1244) are, however, gradually becoming more aware of their legal rights, thanks in part to various awareness projects such as a two-year UN Joint Programme on Domestic Violence in Kosovo (United Nations Kosovo Team – UNKT), which was designed and launched last year by UN Women and four Pristina-based UN agencies (UNDP, UNICEF, UNFPA and OHCHR).

The programme highlights the need for further awareness-raising and developing capacities by offering training on the responsibilities of the police and judiciary, gender-responsive budgeting, gender equality and legislative frameworks, data collection, policy monitoring and evaluation, etc.

Protecting all women from domestic violence in the town of Gjilan/Gnjilane is a priority for its Mayor, Qemajl Mustafa. “I am firmly committed to preventing discrimination of any kind that takes place in Kosovan society. I am against gender-based discrimination, which is an essential condition for social development and human well-being,” he said. Mustafa has come out in support of shelters for survivors of gender-based violence in the whole region in recent years.

During the UNKT Joint Domestic Violence Programme, Mustafa assigned Deputy Mayor Omer Daku as chair of the coordination mechanism, which is composed of municipal authorities, service providers and women’s organizations. Daku has played a vital role in supporting the municipal coordination mechanism and other key partners. This support led to the appointment of a domestic violence coordinator in Gjilan/Gnjilane and development of a strategy to be financed mostly by municipal funds. 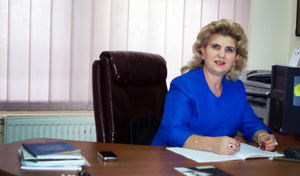 Liria’s Director Nazife Jonuzi in her office at the Center for Protection and Rehabilitation of Women and Children. Photo credit: ART FOTO/Ylfete Fazliu

The importance of coordinating the service system is fully recognized by one of the leading local women shelters. “As a part of this vehicle, we are able to provide prevention, protection and reintegration for family violence survivors and always make sure that this service chain is followed up with actions by key municipal actors,” says Nazife Jonuzi, Director of the Liria Center for Protection and Rehabilitation of Women and Children, which will also participate in policy and strategy formulation — an important instrument for the implementation of the 2010 law on protection against domestic violence.

Liria’s social worker, Shyrete Stublla, says that “Relevant institutions are working together to combat this phenomenon. In our daily work, as we get the information just-in-time, we deliver the best proper service and therefore we respond more effectively.”

To follow Gjilan/Gnjilane’s example, UN Women was approached by coordination mechanism members, along with deputy mayors from Gjakovë/Djakovica and Dragash/Dragaš for further support to develop their municipal strategy and action plans for the next two to three years, to better ensure protection services for domestic violence survivors.

“I believe our municipality has shown its determined approach towards this very harmful phenomenon… I hope that we will serve as an example to be followed at the national and regional levels,” said Mustafa, adding that the promotion of gender equality and advancement of women are constitutional and legal obligations.

To scale up and deepen the work that has already been done, Daku has proposed adding the two neighbouring municipalities of Novobërdë/Novobrdo and Partesh/Parteš with mixed and Serbian communities in the second phase of the programme.