Across Europe and Central Asia, women confront economic impacts of the pandemic

Before the pandemic, women across Europe and Central Asia already earned and saved less than men, were the majority of single-parent households and held more insecure jobs in the informal economy or service sector, with less access to social protection.

According to the International Labour Organization, there was a 14 per cent drop in working hours in Europe and Central Asia during the second quarter of 2020 and, globally, the equivalent of 400 million full-time jobs have been lost – with women disproportionately affected.

Moreover, new research commissioned by UN Women and UNDP shows that the pandemic will push 96 million people into extreme poverty by 2021, 47 million of whom are women and girls. This poverty surge will also widen the gender poverty gap. 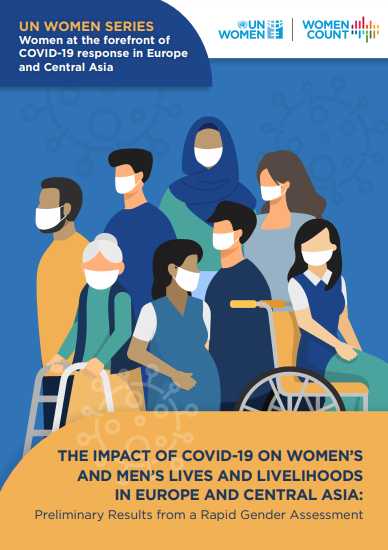 On the heels of the pandemic, the UN Women Regional Office for Europe and Central Asia conducted a rapid gender assessment to evaluate the impacts of COVID-19, in collaboration with partners. The survey, which was conducted in 16 countries between April and June 2020, reveals a troubling situation. Women’s paid working hours have declined across all countries/territories[1] ranging from 31 per cent in Georgia to 65 per cent in Kosovo[2], while decreased earnings for women ranged from 15 per cent in North Macedonia to 52 per cent in Turkey. An alarming proportion of women (60 per cent) reported that it will be difficult to cover basic expenses, such as rent and utilities, if restrictive measures continue.

UN Women also conducted an online survey in Ukraine, among 3,310 women and 528 men. Women were more likely than men to say they might have to save on food (81.8 versus 72.3 per cent), or have trouble paying for rent or utilities (77.4 versus 65.5 per cent). Quarantine had also increased the burden of unpaid domestic and care work, with 63.5 per cent of women respondents saying they are spending more time on cleaning versus only 44.1 per cent of men.

Jobs are lost while unpaid care and domestic burdens grow 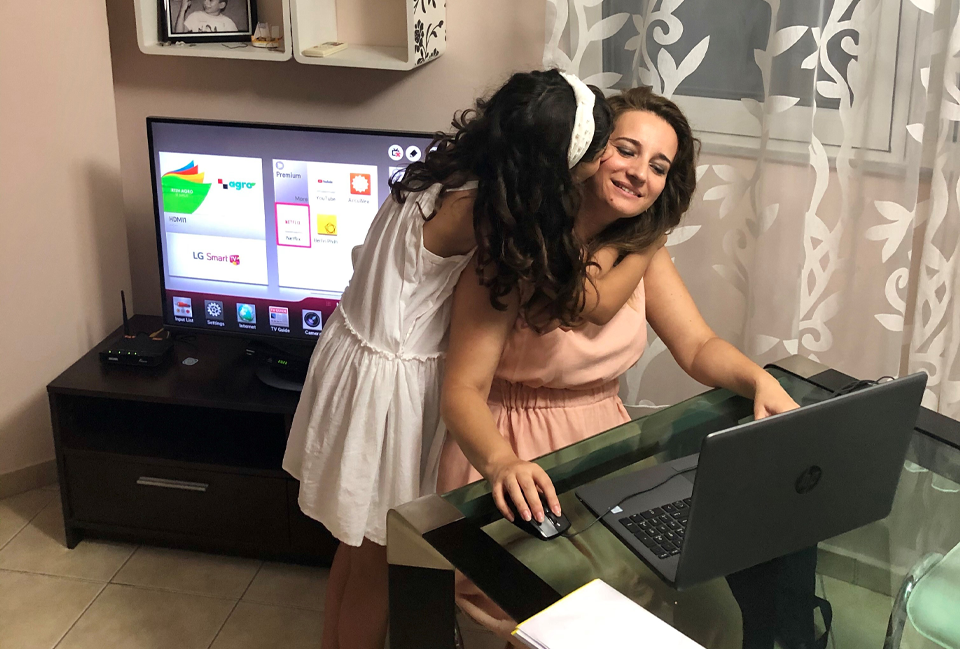 UN Women’s Rapid Gender Assessment in Turkey found that women were more likely to lose their jobs (19 per cent) than men (14 per cent), and although both men and women reported an increased workload around the house, women were more affected – with 78 per cent spending more time on cleaning, versus 47 per cent of men.

“The days got longer; they never ended”, recalls Daniela Fejzaj, a 40-year-old information technology professional and mother of two, remembering the endless chores during the COVID-19 lockdown in Albania. She and her husband worked from home for more than two months, but she carried the burden of unpaid labour, spending around nine hours per day.

“It was impossible to stick to the official work schedule; I was on-and-off throughout the day, working until 1 or 2 in the morning,” she says. 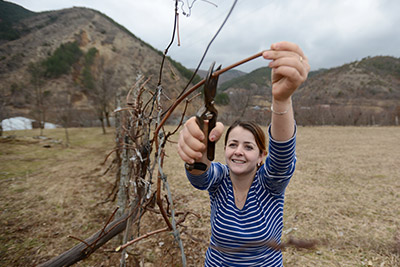 In rural areas of Albania, many female heads-of-households and rural women are struggling. Although the Albanian Government has taken broad measures to provide economic support to different groups, these women are often left out of these schemes, as almost 90 per cent of rural family businesses registered in men’s names.

“We have called on local governments to apply gender lenses in the socioeconomic support schemes adopted, including using sex-disaggregated data when preparing beneficiaries’ lists,” says Fabiola Egro, Executive Director of Today for the Future Community Development Centre. “This would mean including in the COVID-19 support schemes those categories that are left behind, such as women who work in and outside their homes.”

COVID-19 has also disrupted rural tourism in Albania. The decline puts a strain on the farms and guest houses in the upper Vjosa river, where local women work and earn a living. These women are now counting on local tourists. 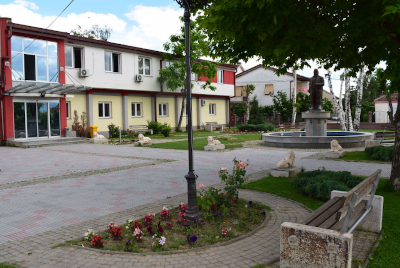 Amid the pandemic, municipalities in North Macedonia have been applying gender-responsive budgeting to better understand the specific needs of women and other vulnerable groups and to realign their budgets accordingly.

With UN Women’s technical support, over the past year, more than 250 gender-specific measures have been budgeted in 21 municipalities across the country. During the pandemic, UN Women did a mapping of COVID-19’s impact on women and men in all 21 municipalities as they plan and design COVID-19 support programmes.

The City of Skopje has increased its funding to end violence against women and girls, setting up a new safe house for women survivors of violence and doubling funds for a family centre providing psychosocial support and counselling services to victims and perpetrators.

Amid the movement restrictions, the Municipality of Novaci allocated specific resources for women left without access to public transportation to be able to access health care or meet other urgent needs. 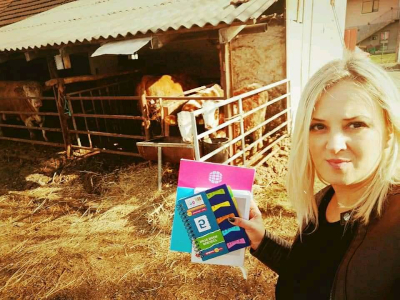 A similar scenario is playing out in rural Serbia.

“Agriculture is facing enormous consequences and that individual producers are now invisible to decision-makers,” says Jelena Ruzic, founder of the Women’s Association of Kolubara District, in western Serbia, which supports women’s economic empowerment through education and networking.

In light of the pandemic, Ruzic and 122 women involved in a UN Women-run, EU-funded project sent a letter to the Serbian Minister of Agriculture, suggesting alternatives for public transport and sales, the withdrawal of sanctions for movement for farmers, as essential workers, and protection for farmers from widespread abuse from buyers.

“We have noticed that some of the measures we suggested have been taken into account, such as the creation of an online platform to connect producers and buyers.” 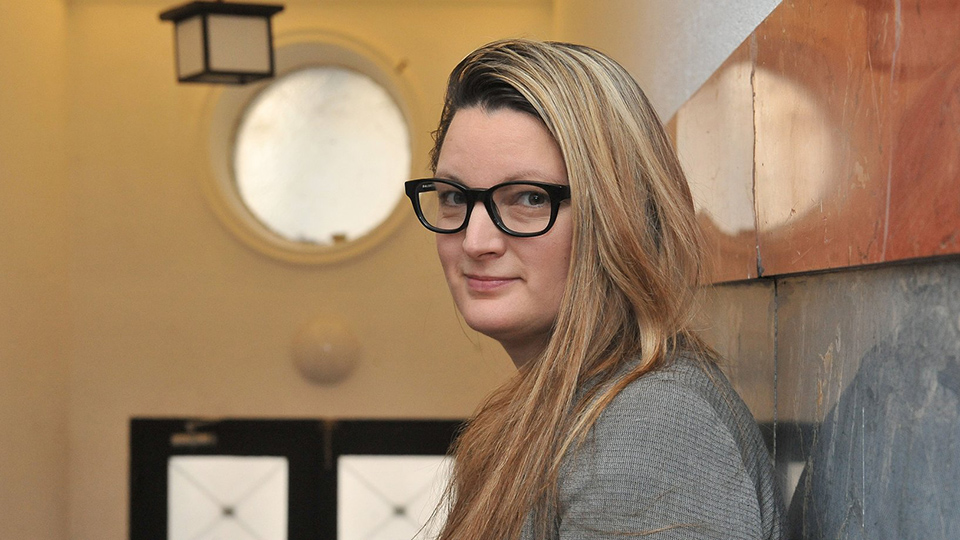 “In the first weeks of the pandemic, 31 per cent of women survivors informed us that they had lost their jobs,” says Jelena Hrnjak, programme manager at Atina NGO in Serbia, a partner of an EU-UN Women project that focuses on women’s social entrepreneurship to economically empower survivors of human trafficking. “By the second week, it was 55 per cent. In week four … 92 per cent of these women [were] without any income.”

Atina’s social enterprise, Bagel Bejgl, had to close its doors amid the COVID-19 lockdown, and survivors are focusing instead on delivering their bagels to alleviate the economic impacts. “Clearly, we have a great test ahead of us. I strongly believe that continuing to invest in women’s social entrepreneurship is the right recipe to overcome this and all other crises,” says Hrnjak. 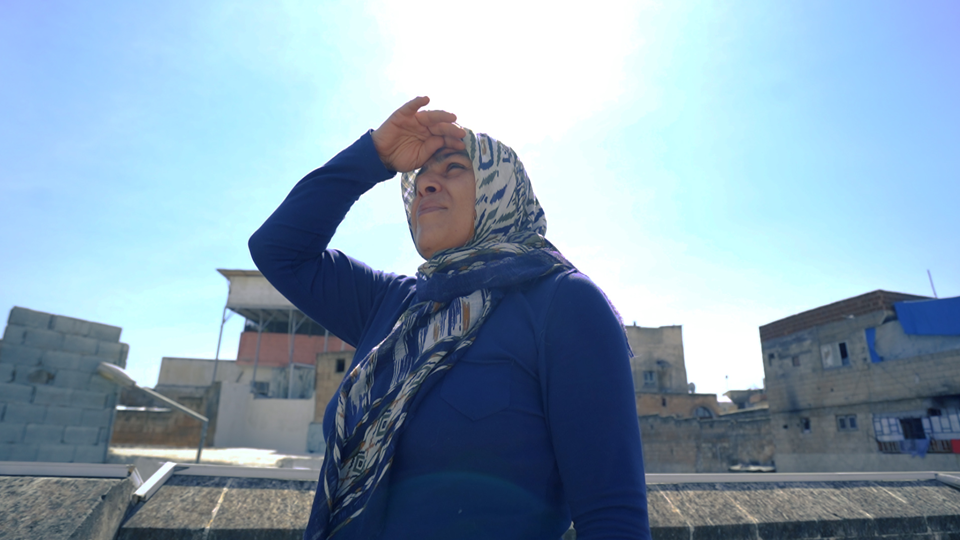 From behind her phone screen, Berivan Atilgan smiles as she receives another order. Her hand-crafted toys, baby blankets and baby socks used to be an important added source of income for her family. Now, they are their only source of income. Her husband, a seasonal agricultural worker, could not work due to COVID-19 restrictions.

Atilgan is among the 2,800 Syrian and Turkish women who enhanced their digital skills and employability through coding, computer literacy and Internet marketing training supported under a UN Women project.

“After the digital skills training course, I started to use [Instagram] differently, to promote my handicrafts. If I didn’t have any digital skills, I couldn’t have continued my sales, which brings the only income we currently have as a family. I market on Instagram and receive online orders from all over Turkey.” 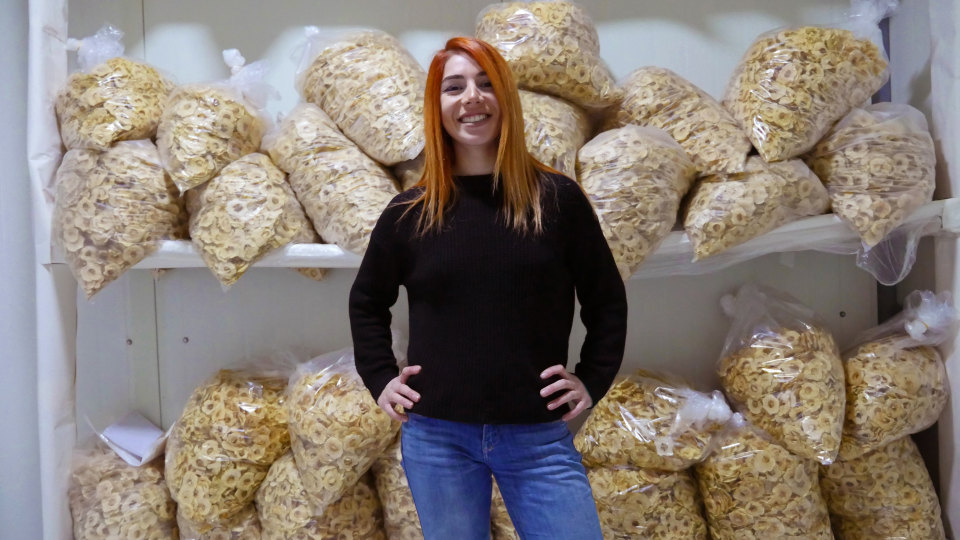 As food production was allowed to continue in Georgia, even amid COVID-19 shutdowns, some of these businesses have been resilient.

Nona Noniashvili is a 25-year-old Georgian entrepreneur who built her company’s factory in a conflict-affected village along the boundary with South Ossetia, to help a community in need and empower local women. She has managed not only to keep her business afloat during the pandemic but to make it prosper by using online sales and social media promotions through an online platform (Soplidan.ge) UN Women connected them with.

“Our sales actually grew, even during the pandemic,” she says, proudly, urging women entrepreneurs not to lose hope and to innovate to overcome challenges. She says governments also need to be more supportive of businesses during the pandemic, especially small and medium-sized enterprises. “It would have been so much better if governments supported businesses with equipment and other needs and provided tools for them to quickly adapt to online services,” she says. 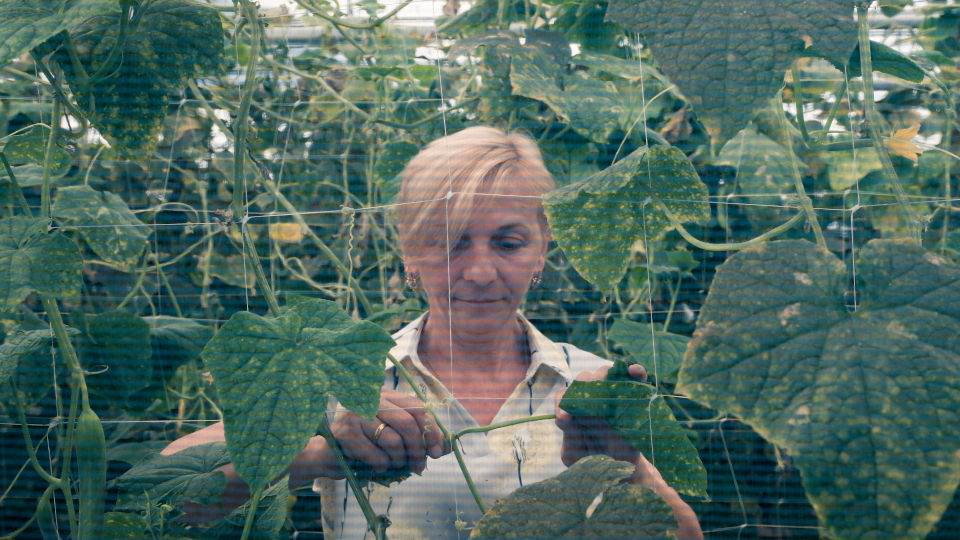 Georgian cucumber farmer Keti Tomeishvili witnessed the despair of her four local women employees after their family members became unemployed amid the pandemic. She increased their salaries, to lessen the blow. Then, she decided to go further, gifting them each one of her five greenhouses.

Tomeishvili was trained through a women’s economic empowerment project run by UN Women and the Georgian Farmers’ Association, through which she was able to expand her production and improve the condition of her greenhouses.

Meanwhile, a beneficiary from another UN Women project in southeast Georgia, gained wide renown after hoeing a neighbour’s potato field to save their harvest while they were treated in hospital for COVID-19.

“What else could we do in such a situation?” says Naira Paksadze. “If we hadn’t done it, the weeds would have spoiled everything. The family will need some source of income when they recover and get out of hospital, won’t they?”

On another front, UN Women and the Georgian Farmers’ Association have been ramping up their advocacy for agritourism legislation. The legislation was discussed at a meeting in June and the Parliament of Georgia is now planning to pass the law on agritourism in the near future. 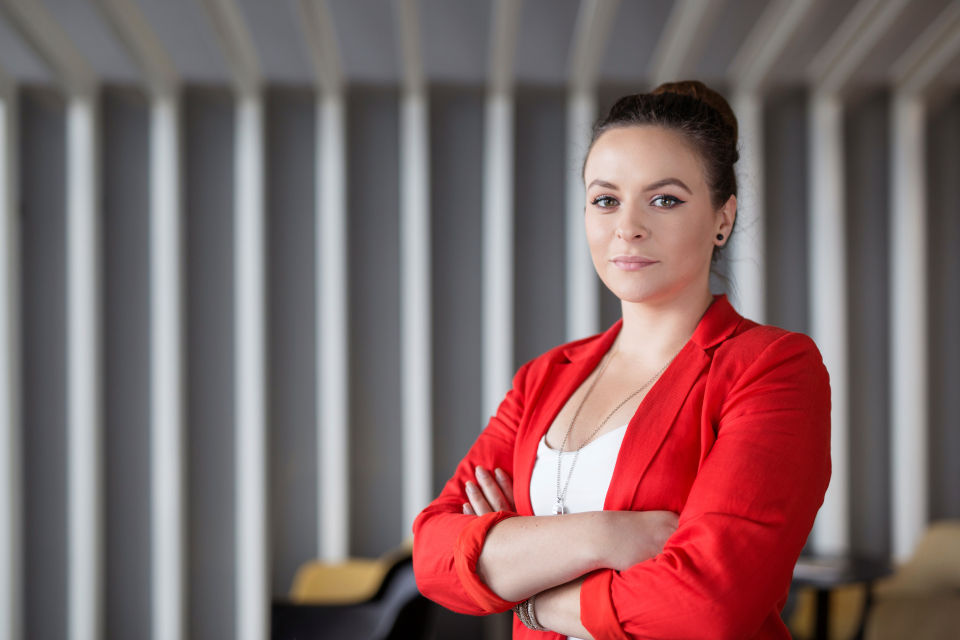 In Bosnia and Herzegovina, UN Women’s IT Girls initiative focuses on increasing girls’ and women’s participation in the ICT sector through skills development, mentorship, economic empowerment and confidence-boosting. Adapting to the COVID-19 crisis, IT Girls shifted online, organizing free webinars on a range of topics for girls and young women whose regular education has been interrupted by the crisis.

Twelve free webinars have been hosted so far, which were livestreamed on Facebook, generating over 20,000 views on Facebook with communities all over the country. Over 250 people, mostly women and girls, have actively participated, learning about topics such as graphic design, robotics, project management and cyberbullying.

“At the end of the day, the messages we received from girls who were inspired by our webinars to pursue careers in STEM are the best indicators of our success,” says Zerina Mandžo, IT Girls Project Officer for UN Women Bosnia and Herzegovina. “We know that access to technology is not the same throughout the country, so we will keep working to reduce this gap through online trainings and school initiatives, and to make sure that no girl is left behind.” 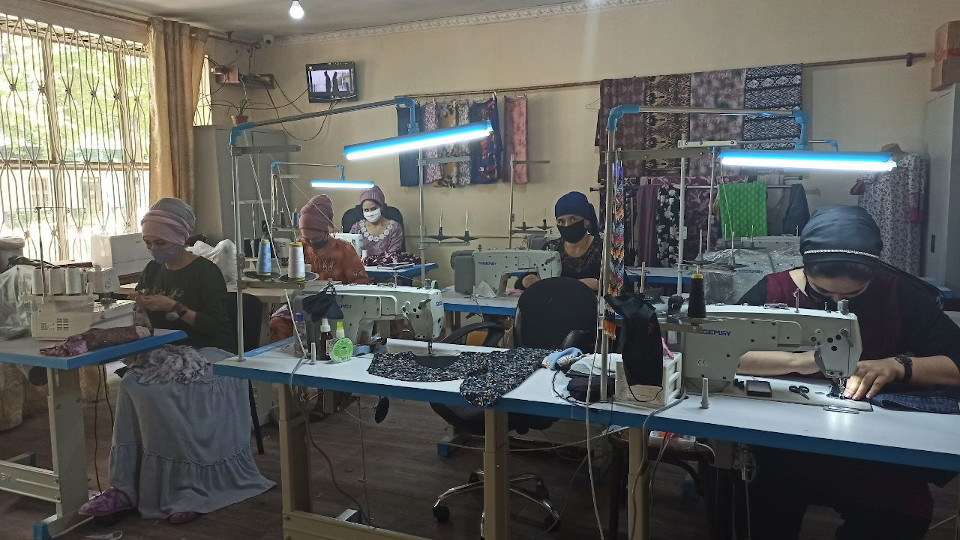 Due to the high demand for COVID-19 protection masks, Mammadova managed to fill orders to supply more than 23,000 masks within 10 days.

When Mammadova* signed up for a UN Women training for women living with HIV in Tajikistan last year, she had a small sewing workshop. Her proposal was one of four approved for funding, which allowed her to expand production and provide new jobs for 10 women in her rural hometown.

“UN Women support is especially important and timely during such difficult and uncertain times,” she says. Amid the high demand for COVID-19 face masks, Mammadova managed to fill orders to supply more than 23,000 within 10 days. She credits the knowledge she gained from the business trainings for allowing her to organize an effective production cycle, calculate capacity, efficiently distribute labour, and encourage workers to ensure quality and the timely execution of orders.

These are just some of the many stories of how women across Europe and Central Asia have been impacted economically by the pandemic – as well as how their drive, solidarity, innovation, advocacy and resilience are helping them, and others, to withstand the crisis. But such work cannot happen without support.

Six months later: Women at the forefront of COVID-19 response in Europe and Central Asia

Support to women in Serbia during COVID-19

*Her name has been changed to protect her identity.

[2] All references to Kosovo on this website should be understood to be in the context of United Nations Security Council Resolution 1244 (1999).