Muslima Sobirova has gone from an abusive relationship to master her own destiny with a little help from the “Communities resilient to violent ideologies” project, implemented by UN Women and funded by the Peacebuilding Fund. She is among the 240 women and girls from vulnerable settings the project supported in changing their perspectives, gaining confidence and developing new skills. Some of these women are now using their skills to keep their communities safe from COVID-19. 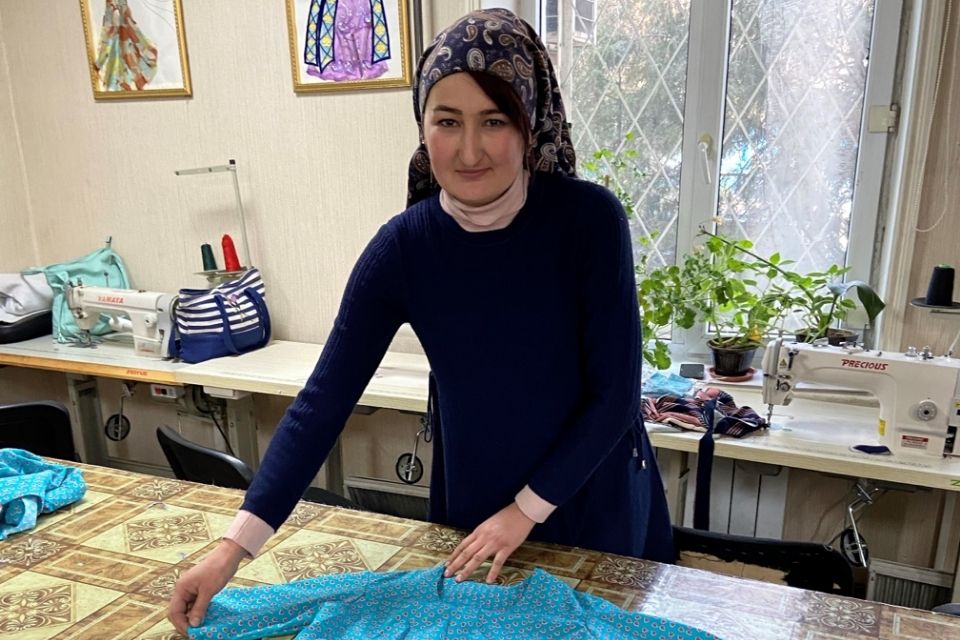 33-year-old Muslima Sobirova lives in a small village in the Osh region of southern Kyrgyzstan. When she just got married, her husband forced her into tobacco plantation work and used to physically abuse her. While working in the plantation, she got sick with asthma from the tobacco and could no longer work there. Sobirova’s husband abandoned her and remarried a younger woman. She was left with a small baby, no income, no home and no education to fall back on. This situation brought her to the brink of despair.

“I saw the light at the end of the tunnel when I heard about the project a few years ago. I was invited to a seminar on women's rights, and since then my future is looking brighter,” Sobirova said.

Through the project, UN Women aimed to help vulnerable women and girls like Sobirova to gain new confidence and skills so that they could stand on their own feet. To achieve this, training sessions were conducted covering human rights, with the special focus on women’s rights and leadership, also business planning and financial literacy. Across 12 municipalities, UN Women has reached out to 240 vulnerable women and girls. UN Women is also supporting the small-scale initiatives of the vulnerable women, helping address the causes of insecurity, and prevent radicalization and discriminatory practices.

Over the years, Sobirova has become a regular participant in the trainings conducted by lawyers, psychologists, economists and women activists with the participation of local self-government representatives in her district.

Seeing Sobirova’s progress, project field specialists suggested her to learn sewing as part of the support that they were offering. Within a month, she came to Osh city with a group of women and girls from vulnerable situations, where she mastered the basics of sewing, learning from experienced tailors. She now has many orders. She sews for young girls and, at the same time, talks to them about the risks of early marriages.

Sobirova also attended training sessions covering financial literacy and business development. Her business proposal was selected by an evaluation committee, which included the head of the women’s council, a social worker and a local self-government representative.

“Recently I learned that the project will give me and three other young women from our community sewing machines, accessories and fabrics. Basically, everything we need to start a small private business. It means that I will have something to live on, I will have my own business,” Sobirova said.

From the 12 municipalities initially covered by the UN Women initiative, 61 business proposals were received for support through the Small-Scale Initiatives (SSI) element of the project. Among those submitted, the selection committee approved 46 proposals, which will involve 93 women.

“Thanks to the project, Muslima enhanced her knowledge in various fields. She gained confidence in her leadership skills, initiated social changes in her traditional community, actively advocated for ending violence against women and girls and called for preventing the violent ideologies. Muslima progressed a lot by creating avenues to solve social issues that primarily face women and girls through the close cooperation with local authorities and in that way she gained the respect of people in her community,” said Dildora Khamidova, UN Women field specialist for southern regions.

Sobirova is now a recipient of the small-scale initiative support and an activist in her community. During the COVID-19 pandemic, she actively helped to identify vulnerable women and girls for humanitarian aid support. She was among the activists who helped UN Women distribute hygiene kits in communities. She is a member of the local women's health committee.

When the pandemic began, there was a shortage of masks and equipment, and her community was experiencing panic. Sobirova and her friends decided to take action. They borrowed sewing machines, bought fabrics and other accessories. They made masks and distributed these among friends and relatives free of charge. Now, with the sewing machine from UN Women, her and some other women are planning to make fabric masks and other protective gear for their community members.

Gulshanoi Khasanboeva, another project participant from Osh region who supports Sobirova with her sewing business said: “I feel so privileged to be a part of this project. It allowed me to gain more confidence and understand how to protect myself from negative influences. It was also a good platform for socializing, I have made new friends, and finally it allowed me to complete the sewing courses together with Muslima and other women from my community. My happiest day was when I sewed masks and distributed them among my neighbors to protect them from COVID-19,” she said.