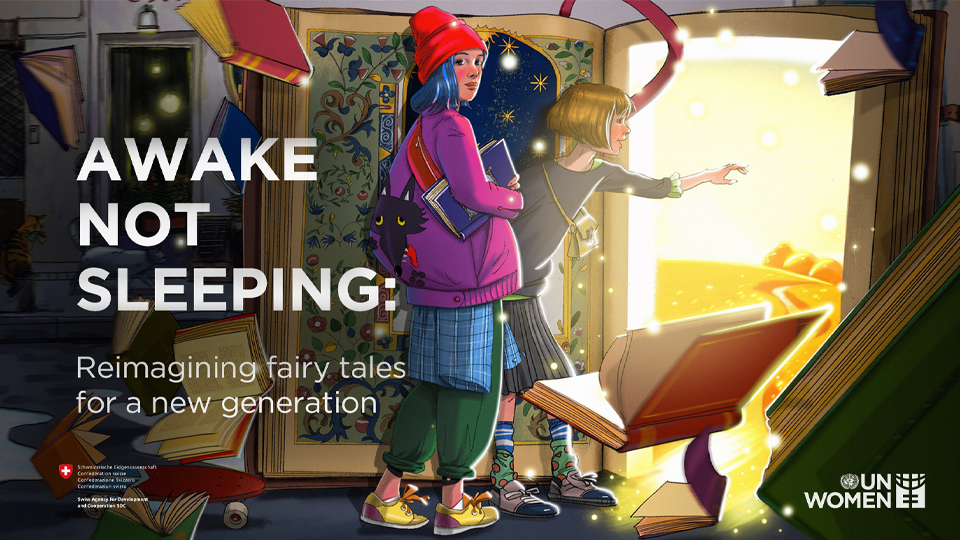 The UN Women Regional Office for Europe and Central Asia is continuing to roll out its new creative writing initiative, ‘Awake Not Sleeping: Reimagining fairy tales for a new generation’, which aims to support fresh, creative dialogue to change the way societies think about women and girls’ roles, human potential and rights by rewriting and reimagining popular fairy tales.

The initiative explores the role of fairy tales in the cultural struggle over gender equality and feminism. ‘Fairy stories’ were originally created by women for women, about heroines and heroes who challenged the restrictive gender roles, expectations, values and laws of their time. But they were somehow tamed and rewritten over time by story collectors.

To bring back these forgotten narratives, stories about strong and empowered women and girls that defy gender stereotypes will be harnessed in this new collection of fairy tales. They will inform younger generations about changing attitudes towards women and girls, gender equality and feminism, given that the stories children grow up with are vitally important in shaping their world views as adults.

A second workshop was held in January, followed by a third in March. The workshops support writers to critically analyse classic tales from their respective countries of the ECA region and to reflect on how to transform, reimagine, reinterpret, redefine or disrupt these tales as tools for gender equality.

“I would like to highlight the extremely friendly and professional atmosphere of the workshop,” praised one participant. “Those who led the workshop were not just professionals, but also inspirers: I felt how this project was important for them too. In such an atmosphere, you always perceive information and new knowledge better.”

Another participant added: “It helped me think more accurately of the audience we were writing for [children]. I also enjoyed using the tools and theory we discussed to rewrite the stories and make them fun, dynamic and enjoyable for a young audience, rather than simply didactic.”

The Awake Not Sleeping anthology, comprising a total of 25 stories will be officially launched on 30 June in Paris at the UN Women Gender Equality Forum. They will be available to download from the UN Women website immediately after the launch.

The role of fairy tales in shifting gender stereotypes

Tales and historical characters are part of every society’s cultural heritage, disseminated over the generations through oral, pictorial and written traditions. They play an important role in conveying folklore, core values and norms, including gender norms. For children, fairy tales constitute a big part of their socialization process, stimulating their imagination, creativity and enabling their identification with characters. Such stories allow children to temporarily escape from reality and are also powerful educational and socialization tools, helping girls and boys grow and develop their personality.

Marking the 25th anniversary of the Beijing Declaration and Platform for Action, and in line with the Generation Equality Forum – held in March 2021 as an intergenerational and intersectional gathering of women activists to create renewed momentum and accelerate progress towards women’s rights – UN Women is garnering efforts to enable positive change and promote gender equality by developing and devoting a modern fairy tale collection for the young readers and citizens of tomorrow.

“The world is changing dramatically. It is particularly poignant that as the COVID-19 pandemic forces people’s physical disconnection, it is also showing how people are all connected by histories, literature and social interactions that are grounded in common values,” says Alia El-Yassir, UN Women Regional Director for Europe and Central Asia. “Despite all the detrimental consequences of the pandemic, it is also an opportunity to reflect and, even more importantly, to act to make gender equality and human rights a lived reality for all.”

Check out "Awake Not Sleeping: Reimagining fairy tales for a new generation" initiative's interactive website here.
Related News
18/11/2021
Press release: UN Women launches its Awake Not Sleeping initiative reimagining fairy tales to promote gender equality
23/08/2021
In the words of Ivanna Levchenko: “I am proud that students and professors at my University can discuss any tough topics and spread the idea of gender equality”
09/08/2021
I am Generation Equality: Sena Dik, vegan activist and YouTuber
14/10/2022
Youth activists and advocate Kerem Bürsin celebrate HeForShe’s 8th anniversary in Türkiye
15/03/2022
The Mountain Climber
END_OF_DOCUMENT_TOKEN_TO_BE_REPLACED