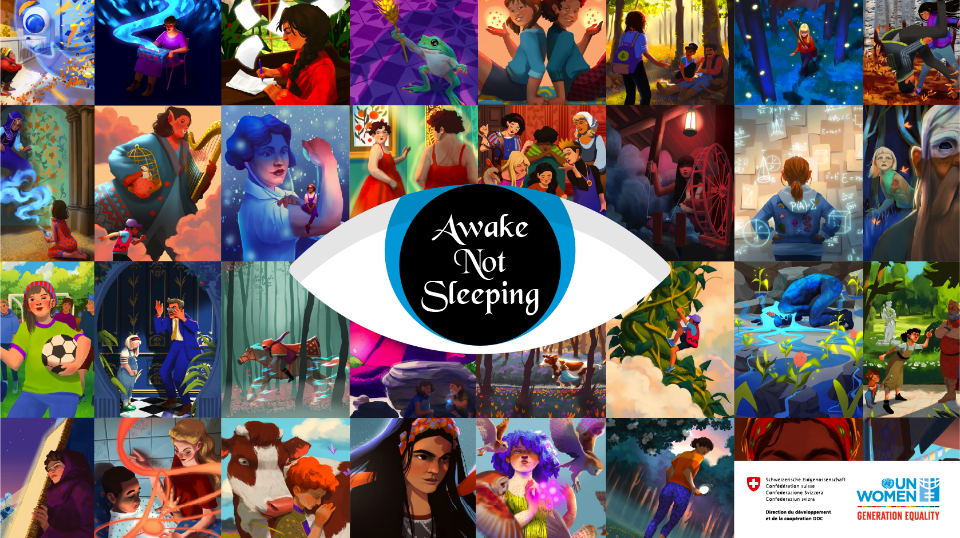 18 November — UN Women Regional Office for Europe and Central Asia launched its new creative writing initiative, Awake Not Sleeping: Reimagining fairy tales for a new generation, which aims to change the way societies think about women’s and girls’ roles, human potential and rights by rewriting and reimagining 28 fairy tales. The fairy tales were created by 31 writers from across Europe, the Western Balkans and Central Asia for children aged 8 to 12.

The launch event brought together feminist writers, celebrities, theatre performers, civil society representatives and children to discuss the role of fairy tales in challenging gender stereotypes and making gender equality a lived reality for all. The event was held in a hybrid in-person and online format at the MEF International Schools in Istanbul, Turkey, and live-streamed on UN Women Europe and Central Asia Facebook Channels in English and Russian.

“UN Women leads action across the region to advance gender equality for girls and women – and for boys and men – in their minds, homes and communities,” said Alia El-Yassir, UN Women Regional Director for Europe and Central Asia. “We believe in the power of storytelling and hope that Awake Not Sleeping will stir imaginations and stimulate children, young people, families and communities to talk about and take action against gender inequality,” she added.

Storytelling has the transformative power to disrupt norms, challenge stereotypes and inspire positive change. Many fairy tales were originally created by women for women, about characters who challenged the restrictive gender roles, expectations and laws of their time. But over history, these narratives were rewritten by the powers of their time to bolster harmful social norms. 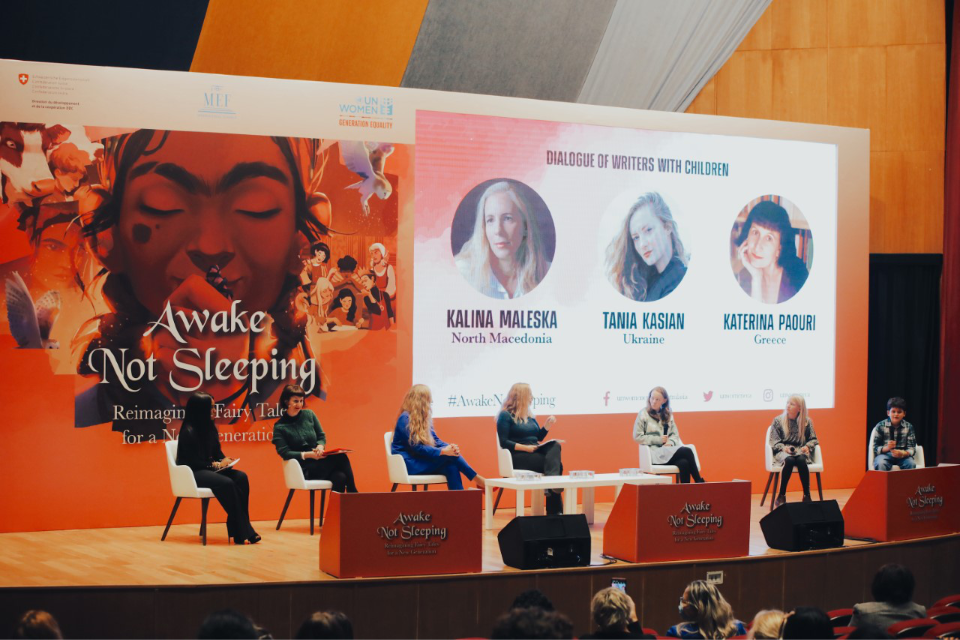 Writers of the Awake Not Sleeping collection having a conversation about fairy tales with student of MEF International Schools. Photo: UN Women/Gokhan Ozfirinci

“When I was a child, we had six volumes of books of folk tales and fairy tales at home. I was so impressed with the stories that I would read them time and again during my childhood, always imagining what I would have done differently if I could become a character in the stories,” highlighted Kalina Maleska, a writer from North Macedonia, author of “The Child Without Golden Hair”.

“Stories and their conscious analysis may potentially contribute to promoting solidarity, gender equality, understanding and appreciation of other people’s perspectives,” added Tania Kasian, a writer from Ukraine, author of “The Sleeping Castle”. “I believe that fairy tales play a huge role in our life. They form these patterns that transform our stereotypes and attitudes towards people and situations. I want every girl and boy to know that she or he should protect their own boundaries.”

UN Women invited celebrities from around the world to support the Awake Not Sleeping initiative. Turkish actress Ozge Ozpirincci read the fairy tale “Snow” live on stage. Manizha Sangin, a Tajik-Russian singer, songwriter, finalist of the Eurovision contest and UN Refugee Agency (UNHCR) Goodwill Ambassador from Russia, joined the event virtually and read an excerpt from one of the fairy tales.

“The Awake Not Sleeping reimagined stories will awaken your curiosity about how fairy tales can create a better world with gender equality and respectful relationships between us,” said Sangin, who is also co-founder of the SilSila Foundation that fights with domestic violence among refugee families.

“It is important in this day and age to put gender equality at the forefront. I encourage everyone to read these reimagined fairy tales and help make the world a better place for women and girls,” highlighted Kerem Bürsin, a Turkish actor and producer, in a video message.

During the event, the writers had an open conversation on stage with selected children from MEF International Schools on their thoughts and impressions of the fairy tales in the collection.

“Last summer I was thinking about how in fairy tales boys always save the day, so I started writing a book about a fierce princess. It is important that there are books where girls can be brave and boys can be more complicated too,” said Maria Folkesson, a 9-year-old student from MEF International Schools. 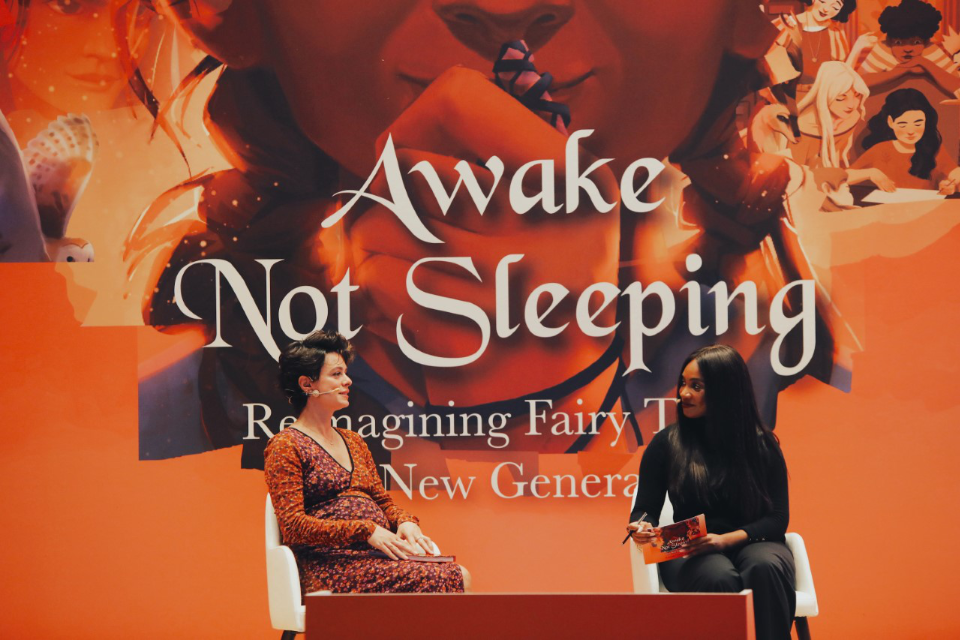 Kuzey Dogan, an 8-year-old student from MEF International Schools, said: “I remember when a friend in my class did a poster on the UN Sustainable Development Goal on Gender Equality, explaining how boys and girls may not be exactly the same but should be treated equally. It makes me think of how Malala is a hero and a girl. We need more hero girls in the stories we share.”

The Awake Not Sleeping launch event engaged more than 4600 people from across the world in a mainly virtual format to support fresh, creative dialogue for the rapid advancement of gender justice. Join the conversation on the role of storytelling in achieving gender equality and share the fairy tales on social media using #AwakeNotSleeping and #GenerationEquality. Tag: @unwomeneca on Twitter, @unwomeneuropecentralasia on Facebook, and @unwomeneca on Instagram.

This initiative is implemented by the UN Women Regional Office for Europe and Central Asia as part of the Generation Equality campaign, with financial support from the Swiss Agency for Development and Cooperation.

Related News
09/08/2021
I am Generation Equality: Sena Dik, vegan activist and YouTuber
15/03/2022
The Mountain Climber
08/02/2022
In the words of Marharyta Meleshkova: “We can reach any height. The main thing is to overcome the stereotypical barriers that exist only in our heads”
20/09/2021
First HeForShe University Tour kicks-off in Ukraine
23/08/2021
In the words of Ivanna Levchenko: “I am proud that students and professors at my University can discuss any tough topics and spread the idea of gender equality”
END_OF_DOCUMENT_TOKEN_TO_BE_REPLACED