Take five: “It’s time for the new generation of activists to dare and act!” 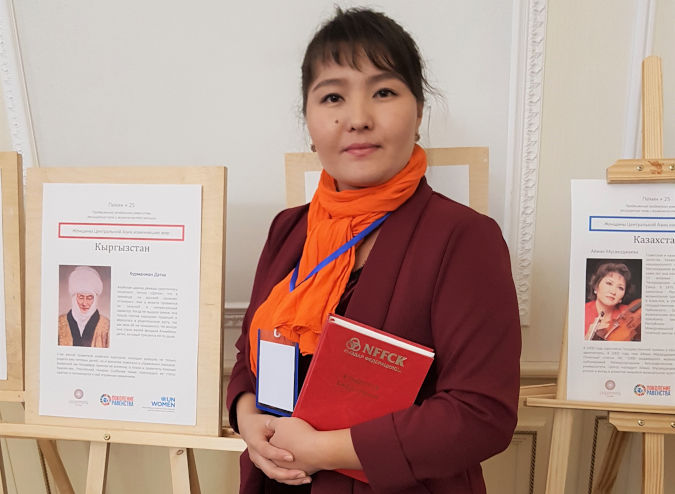 Altyngul Zhanlynbekovna Kozhogeldieva, 32, heads the National Federation of Female Communities of Kyrgyzstan (NFFCK). An activist fighting against child marriage since she was 14, she believes that barriers remain in achieving equality between boys and girls. In this interview, Ms. Altyngul Kozhogeldieva discusses what’s changed in gender equality and under-age marriages in Kyrgyzstan since Beijing 1995, warns of the dangers of poor implementation and radicalization, and calls on the next generation to step up.

The 25th anniversary of the Beijing Declaration and Platform for Action to empower women and girls is next year, in 2020. What drove – and drives – the women's rights and gender equality agenda?

The women's rights and gender equality agenda and the 12 critical areas of concern remain vitally relevant nearly 25 years after the adoption of the Platform for Action. No country in the world, including Kyrgyzstan, has achieved full equality for women and girls. Significant inequality persists between men and women, boys and girls.

What has fundamentally changed in gender equality and with women and girls in 25 years?

The emergence and successful development of organizations led by girls is an important achievement of the past 25 years. There are now many such organizations in Europe and Central Asia, and they contribute to the 12 main thematic areas of the Beijing Platform for Action. Our federation is one. In 2001, five 13-to-15-year-old girls from remote regions created an organization that was later recognized internationally when child marriages and bride abduction became country-wide issues.

In September 2019, Uzbekistan became the last Central Asian country to raise the age of marriage for women to 18 years. All countries in Central Asia now legally prohibit child marriages. In 2016, the Kyrgyz Republic Criminal Code was amended with Article 155, which made any parent or adult involved in or performing a religious ceremony to marry a minor in violation of the marriage age legislation liable to 3 to 5 years imprisonment. This was a critical step towards eradicating child marriages in Kyrgyzstan.

What gender equality issues would you bring to the attention of Central Asian heads of state?

First, indifference by authorities to the challenges faced by girls and inadequate implementation of the many good laws Kyrgyzstan has adopted to protect girls from child marriage, bride abduction and violence in school, family and community put Kyrgyzstan at risk of not fulfilling its obligation to achieve the Sustainable Development Goals (SDGs). Second, be highly concerned by radicalization and lea ding to violent actions Social injustice, discrimination in public and private life, poverty, unemployment and poor religious literacy make women and girls vulnerable to radicalization.

What are your expectations for the Beijing+ 25 Review?

As a female gender equality and women's rights activist, what would you say to 25-year olds?

The world community is at a turning point in the struggle for the women’s rights. Ensuring gender equality, empowering women and girls, protecting women’s and girls’ human rights should be the young generation’ most urgent tasks. Young people, especially girls, must not wait for the future, but live – and act – now. They should fight for their human rights and gender equality and be active participants in society. This is possible. It’s time for the new generation of activists to dare and act!