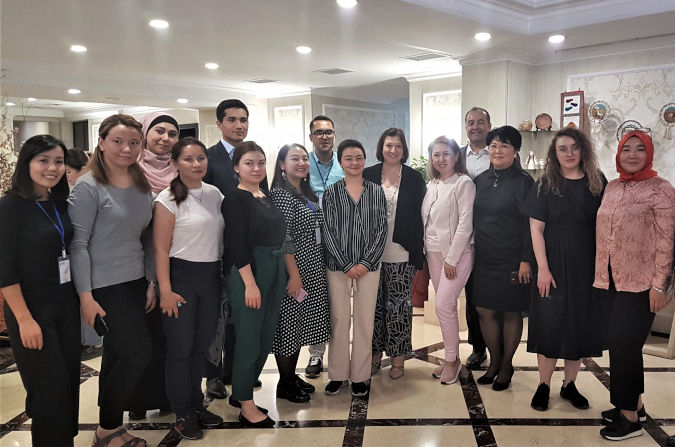 Alia El-Yassir with youth activists from Kyrgyzstan, Kazakhstan, Uzbekistan, Turkmenistan and Tajikistan. Photo: UN Women/Gulnaz Imamniyazova
As part of her visit to Kyrgyzstan and Kazakhstan, Ms. Alia El-Yassir, UN Women Regional Director for Europe and Central Asia met with youth and civil society representatives of five Central Asian countries, government officials and UN agencies in Kyrgyzstan. Violence against women and girls, women’s economic and political empowerment, stereotypes and active involvement of youth in all processes were the main topics of discussions.

During the first day of the visit to Kyrgyzstan, the Regional Director met with Ms. Altynai Omurbekova, Deputy Prime Minister of the Kyrgyz Republic. Alia El-Yassir noted how effective open dialogue between government and civil society is in promoting progressive ideas related to gender equality. She also applauded the recently adopted 30 per cent gender quota in local councils. The Regional Director expressed her gratitude to the Deputy Prime Minister for her personal contribution as a leader of the women’s movement for gender equality. Meanwhile, the Deputy Prime Minister, promised to further strengthen cooperation with UN Women and support all global initiatives, including the ‘Generation Equality’ campaign and the flagship Spotlight Initiative. 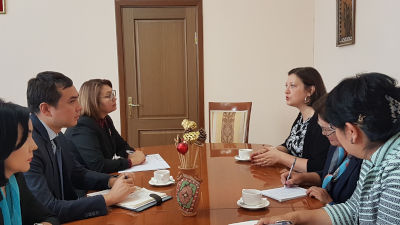 Ms. Alia El-Yassir also participated in the second Beijing+25 Europe and Central Asia Sub-regional experts’ consultation, which was held in Bishkek, Kyrgyzstan, from September 18-19. She emphasized that 2019 marked 25 years since the International Conference on Population and Development. This landmark conference championed the value of investing in women and girls, both as an end in itself and as key to improving everyone’s quality of life. She also noted that, next year, the world will commemorate another series of landmark moments for gender equality. Twenty-five years will have passed since the Beijing Platform for Action was adopted. And, it will be 20 years since the United Nations Security Council passed its resolution on women, peace and security (UNSCR 1325). While, 10 years will have passed since UN Women was created, and five years since the Sustainable Development Goals and the 2030 Agenda were launched.

“We need to make sure that the voices of women and girls who continue to experience different forms of exclusion and discrimination are heard,” Alia El-Yassir said. “I encourage you to think about what it means to leave no women or girl behind in Central Asia. It is critical to use this moment to bring together the gender equality advocates and visionaries who were instrumental in creating the Beijing Platform for Action more than two decades ago together with the next generation of women’s rights activists,” she said. 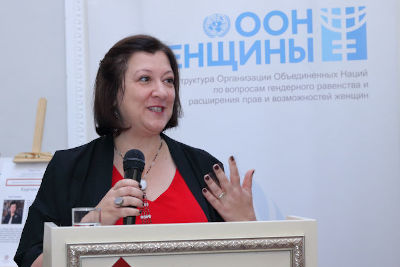 During an informal meeting with UN representatives Ms. El-Yassir discussed closer cooperation and interactions between UN agencies in the country, especially in projects aimed at gender equality. Participating in this meeting were Christine Jaulmes, the UNICEF Representative in Kyrgyzstan, Kanykey Orozbaeva, from the UN Resident Coordinator’s Officer, and Louise Chamberlain, the United Nations Development Programme Resident Representative to the Kyrgyz Republic.

The visit concluded in Almaty, Kazakhstan, with a Consultants’ meeting to discuss setting up a Central Asian gender equality and women’s empowerment knowledge hub. Representatives of UN Women, the UN Population Fund, the Ministry of Foreign Affairs as well as civil activists from various Central Asian countries shared their vision of the future Hub.