Boosting regional cooperation for the empowerment of Afghan women 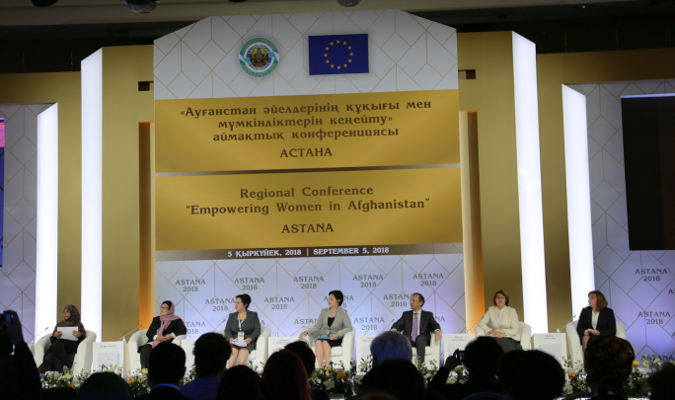 On 5 September, the Ministry of Foreign Affairs of Kazakhstan and the European Union hosted the regional conference 'Empowering Women in Afghanistan’ in Kazakhstan’s capital, Astana.

The conference brought together high-level delegations from Afghanistan, Armenia, Azerbaijan, China, the European Union, India, Kyrgyzstan, Russia, Tajikistan, Turkmenistan, the United States, Uzbekistan, and the United Nations to unite efforts of  stakeholders in the region for empowerment of women and girls of Afghanistan for their full and meaningful engagement in the national reconciliation process and the development of the country. 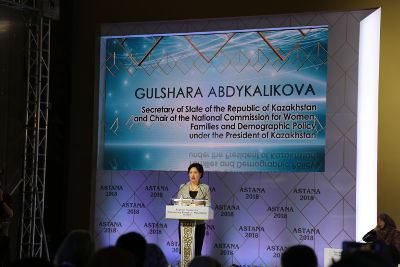 “The agenda of the conference puts emphasis on the special role of women in the modern world and their invaluable contribution to addressing many political and social challenges, including settling conflicts, maintaining peace and security, and improving the life and welfare of the society,” was the welcoming remarks of President of Kazakhstan, Nursultan Nazarbayev, presented by the State Secretary, Gulshara Abdykalikova.

The conference addressed the issues of economic empowerment of Afghan women, expansion of their participation in political, economic and social development of the country through regional integration and cooperation in education and training programmes, capacity building and knowledge sharing initiatives, strengthening public-private partnerships, and forging other synergies for the benefit of the women across the borders in the region. 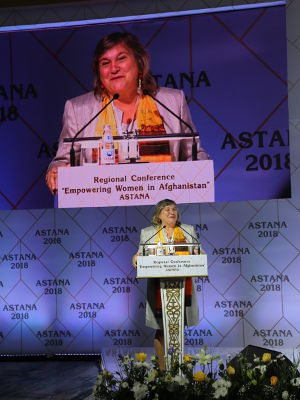 "Gender inequality is a universal challenge. It is pushing the whole world backwards and we need to work all together to make the discussions and commitments made at this Conference a reality to empower women of Afghanistan and Central Asia," stated Maria-Noel Vaeza, UN Women Director for Programme in her address to the conference participants.

The conference yielded a number of concrete initiatives by the Government of Kazakhstan and the international community. A new initiative, financed by the European Union, and to be implemented by UN Women, aims at enhancing the economic empowerment of Afghan women through technical, vocational and higher education in Kazakhstan and Uzbekistan and enable them to have economic independence upon return to Afghanistan.

Separately, Memoranda of Understanding between the Afghanistan Women Chamber of Commerce and Industry and two Kazakhstan organizations - Atameken National Chamber of Entrepreneurs' and Association of Business Women of Kazakhstan were signed to boost collaboration and trade between the countries in the business sector.

“Women’s empowerment is not only a matter of human rights and social justice, it is a matter of development, it is about human growth, it is about fulfilling the potential of the country,” said High Representative of the European Union for Foreign Affairs and Security Policy, Vice President of the EU Commission Federica Mogherini in her video-address to the conference.

Among the foreign guests are the First Lady of Armenia Nouneh Sarkissian, Vice Prime Minister of Kyrgyzstan Altynai Omurbekova, Deputy Prime Minister of Uzbekistan Tanzila Narbayeva, Deputy Chairman of the Senate of Oliy Majlis of Uzbekistan Svetlana Artikova, , Minister of Labour and Social Protection of Population of Azerbaijan Sahil Babayev, Minister for Women's Affairs of Afghanistan Dilbar Nazari, Minister of Information and Culture of Afghanistan Hasina Safi, High Commissioner for Human Rights in Russia Tatiana Moskalkova and Special Representative of the UN Secretary-General, Head of the Regional Center for Preventive Diplomacy for Central Asia Natalia Gherman among others.

The conference resulted in adoption of the Astana Declaration on Empowering Women in Afghanistan.