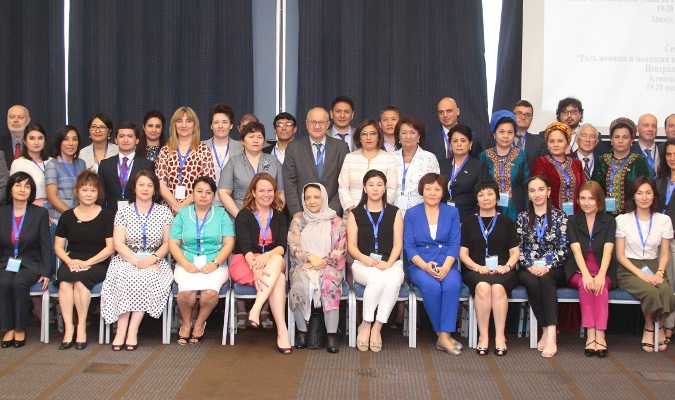 Participants of the meeting. Photo: UNRCCA

Women can play key roles in conflict prevention, and international and regional organizations have an opportunity to support women’s growing engagement, was the key conclusion of a two- day regional seminar held in in Almaty, Kazakhstan. Entitled “The role of women and youth in conflict prevention in Central Asia,” the event was organized by the UN Regional Center for Preventive Diplomacy for Central Asia (UNRCCA) in cooperation with UN Women Multi-country Office in Central Asia and the Regional Office of the UN Population Fund (UNFPA) for Eastern Europe and Central Asia.

In her opening statement, Nargis Azizova, acting head of the Multi-country office in Central Asia, spoke about how the women, peace and security agenda is increasingly being recognized as central to conflict prevention and resolution. She described how in Central Asia, several states have recognized this with the drafting of National Action Plans on UNSCR 1325, which according to her “are no longer static documents, but need resources and monitoring to be fulfilled effectively.”

The Committee on the Elimination of All Forms of Discrimination against Women (CEDAW), on the basis of its General Recommendation 30, is now asking states to report on how they are facilitating women’s participation in peace and security issues, and assuring women’s protection in times of conflict. Implementation of Sustainable Development Goal (SDG) 5 and 16 will also make it mandatory for states to give women more influence in resolving conflict issues.

Representatives from relevant state structures of the five Central Asian states, Afghanistan, Azerbaijan and Iran, regional and international organizations as well as independent experts from the region and beyond gathered in Almaty and exchanged views on practical ways to increase the role of women and youth in conflict prevention and peacebuilding in Central Asia. They noted that women have already contributed significantly to conflict prevention and resolution at the community level, and now ways to raise their role to the national level, need to be identified.

The Special Representative of the Secretary-General, Petko Draganov, underlined "We have seen strong women seeking to prevent further escalation of conflict," and added, "given this experience, we must fully recognize the need for women to be fully involved in the fight against terrorism and extremism, which is key to maintaining sustainable peace and stability at various levels - from local governments to interstate and regional bodies".

Sabine Freizer, UN Women Regional Adviser for Governance, Peace and Security for Europe and Central Asia, provided specific examples on how women are effected by violent extremism in Tajikistan and Kyrgyzstan based on research conducted in the field. During the last few years, about 20 per cent of all those from Central Asia who traveled to join ISIS in Syria and Iraq were women. At the same time she emphasized “women of all walks of life, from teachers, to mayors and civil activists are engaging in the prevention of violent extremism by promoting awareness of the dangers involved and critical thinking, especially amongst yet.”

The event, part of the series of strategic dialogues on security related challenges that UNRCCA annually conducts, provided a fruitful forum for the exchange of ideas between government representatives, civil society and the expert community in Central Asia. There was overwhelming agreement that women’s engagement in conflict prevention and resolution should be supported and increased at the community, national and transnational level, and calls for more sharing of experience in Central Asia and with the wider region.