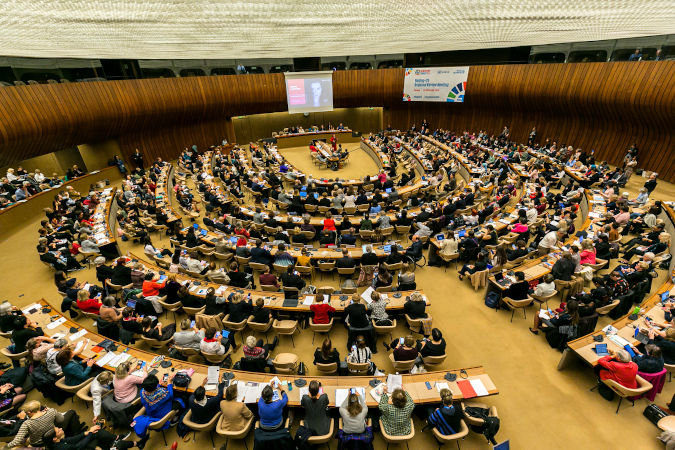 From young gender equality advocates to high-ranking government officials, key stakeholders from North America, Europe, the Caucasus and Central Asia called for the urgent realization of women’s and girl’s human rights and for turning the commitments to gender equality into reality.

“Women`s rights are a development issue. If we don’t achieve goal number 5, no other Sustainable Development Goal will be achieved by 2030. Change is in our hands”

In the lead up to the 25th anniversary of the Beijing Declaration and Platform for Action (Beijing+25), the most visionary agenda for gender equality and women’s rights, more than 850 participants, including high-level government officials, and representatives of the civil society and international organisations from North America, Europe, the Caucasus and Central Asia, gathered in Geneva on 29-30 October to take stock of progress on Beijing commitments.

Despite progress, many of the challenges addressed in Beijing remain a reality in the 56 countries members of the UN Economic Commission for Europe (UNECE). “2020 is an important year in terms of gender equality and women's rights. It's not enough to have hope, we need decisive actions. We need to change mindsets and backward traditions,” stressed Altynai Omurbekova, Deputy Prime Minister of the Kyrgyz Republic, co-chair of the meeting.

The Beijing+25 Regional Review Meeting, jointly hosted by UNECE and UN Women, reviewed progress and persisting challenges, showcasing practical policy approaches that can help remove the structural barriers that hold women back from equal participation in all areas of life.

"2020 is an important year in terms of gender equality and women's rights. It's not enough to have hope, we need decisive actions. We need to change mindsets & traditional behavior. Now we are at a new stage"
-Altynai Omurbekova, Deputy Prime Minister, Kyrgyz Republic #Beijing25 pic.twitter.com/uFK7cVCRyn

“We have hope. We have anger. We call on you to put considerable time, effort, and funding on implementation of the commitments that you have made as states”

Participants stressed the need for faster and stronger progress for women and girls and urgent realization of the commitments to uphold their human rights. Over the last five years, countries in the region have put a particular focus on three main areas: combating violence against women, women's economic empowerment and political participation. 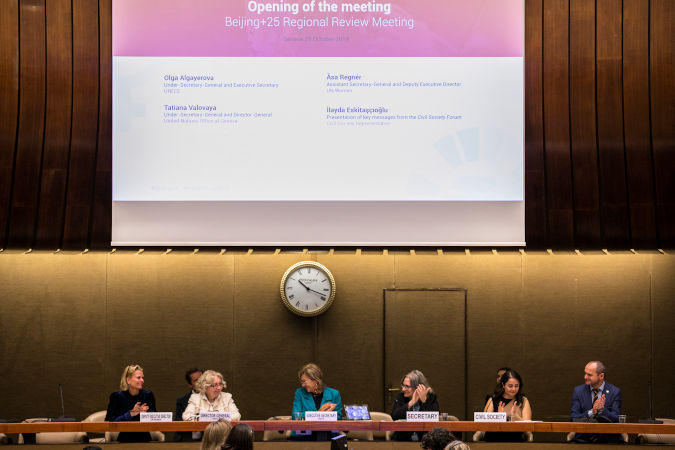 “For the first time, the strategic objectives of the Beijing Platform for Action can be linked to a time-bound framework – that of the 2030 Agenda for Sustainable Development. Let’s work together to turn the goal of gender equality into a reality by 2030,” stated UNECE Executive Secretary Olga Algayerova.

“We all share outrage & sense of urgency to end violence against women & girls. Yet, we know that women continue to be beaten, raped, and killed”– said @MarleneSchiappa, Min. of State for Gender Equality of France, highlighting that ending violence is top priority for her gov't. pic.twitter.com/ynM6XJi8os

“A quarter of a century after Beijing, not a single country has achieved gender equality. Beijing+25 and the global drive to achieve the Sustainable Development Goals provide us a unique opportunity to accelerate efforts, strengthen our partnerships and mobilize all of society, including all generations, to fulfill the longstanding commitments to women and girls,” said Åsa Regnér, Assistant Secretary-General of the United Nations and Deputy Executive Director of UN Women.

In 2020, UN Women will convene The Generation Equality Forum, a global gathering for gender equality, which will be co-chaired by France and Mexico, with the leadership and partnership of civil society. The Forum will kick-off in Mexico City, Mexico, on 7-8 May 2020 and culminate in Paris, France, on 7-10 July 2020.

“We can, together, build the first generation of equality – this is the battle that France is fighting under the auspices of its feminist diplomacy. Let’s make gender equality a global cause!,” stressed Marlène Schiappa, Minister of State for Gender Equality and the Fight against Discrimination of France, at the opening of UN Women’s side event about the Generation Equality Forum.

Participants identified the below key conclusions after two days of intense discussions:

“We are calling on you to put considerable time, effort, and funding on the implementation of the commitments that you have made as states. Let’s walk the talk,” said İlayda Eskitaşçıoğlu, a young women’s rights advocate, channeling the key messages of the civil society forum that took place on 28 October.

The assessment of the regional review will feed into the global Beijing+25 review in 2020 which will take place at the 64th session of the Commission on the Status of Women in March. In September 2020, the General Assembly is expected to convene a one-day high-level meeting to celebrate the twenty-fifth anniversary and accelerate the realization of gender equality and the empowerment of all women and girls.

Related News
21/10/2019
Leaders to take stock of progress on gender equality at Beijing+25 regional review meeting
03/10/2019
North Macedonia hosts third sub-regional consultation on 25 years of commitments to gender equality
06/12/2019
In the words of Ilayda Eskitaşçioğlu: “2020 is the year of gender equality, and a year for reflection”
23/10/2019
Ask a professor: What steps should Turkey take to achieve gender equality by 2030?
16/10/2019
Take five: “Thanks to the Beijing Declaration, violence against women is discussed openly and is no longer solely a private, family issue”
END_OF_DOCUMENT_TOKEN_TO_BE_REPLACED