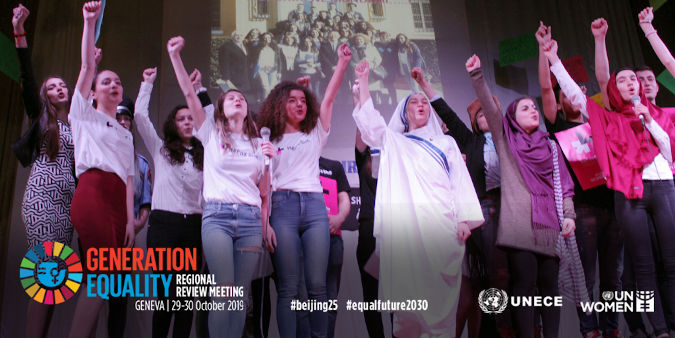 From young gender equality advocates to high-ranking government officials, more than 700 key stakeholders from North America, Europe, the Caucasus and Central Asia will gather in Geneva on 29-30 October 2019 to review the progress made on the commitments of the Beijing Declaration and Platform for Action, the most visionary agenda for gender equality and women’s rights, adopted almost 25 years ago.

The Beijing+25 Regional Review Meeting, jointly hosted by UNECE and UN Women, will review progress made and persisting challenges, showcasing practical policy approaches that can help remove the structural barriers that hold women back from equal participation in all areas of life. This will galvanize collaborative efforts on key issues, including equal pay, equal sharing of unpaid care and domestic work, parental leave policies, ending all forms of gender-based violence and equal participation in decision-making. It will also provide a platform to discuss how Sustainable Development Goal 5, which aims to ensure gender equality by 2030 as a critical foundation for sustainable development spurs progress towards fulfilling the comitments of governments under the Beijing Declaration.

Prior to the meeting, a Civil Society Forum will be held on 28 October to channel the inputs of gender equality advocates from across the UNECE region and prepare recommendations which will be presented in the opening of the Review Meeting.

In the lead up to the Beijing+25 Review Meeting, 51 UNECE member States prepared national reports providing a detailed picture on national strategies and policies that have contributed to women’s empowerment and gender equality at the country level (see regional synthesis report).

The report on key trends on gender equality found that gaps between women and men in the UNECE region have narrowed, but progress is only at a snail’s pace. Women’s employment and wage rates remain much lower than men’s, especially when there are small children in the family. In education, gender-stereotyped subject choices persist, which translates into occupational segregation. Women do more domestic and care work than men. Women remain under-represented among managers and parliamentarians. Women suffer considerable levels of partner violence and sexual violence.

More information about the meeting: https://www.unece.org/beijing25

Click here to view the agenda of the meeting.

At the Fourth World Conference on Women in Beijing, China, in 1995, the Beijing Declaration and Platform for Action was adopted by 189 governments committed to remove the systemic barriers that hold women back from equal participation in all areas of life, with a specific focus on strategic and bold actions in 12 critical areas of concern. Since 1995, every five years global review meetings take place, preceded by regional meetings organized by the five Regional Commissions. The outcomes of the Beijing+25 Regional Review Meeting will feed into the 2020 Global Beijing+25 Review at the sixty-fourth session of the Commission on the Status of Women (CSW).

Related News
31/10/2019
Member States and gender advocates call for urgent and effective measures to accelerate gender equality
06/12/2019
In the words of Ilayda Eskitaşçioğlu: “2020 is the year of gender equality, and a year for reflection”
03/10/2019
North Macedonia hosts third sub-regional consultation on 25 years of commitments to gender equality
07/11/2014
“This is a wake-up call,” UN Women Executive Director tells European Beijing+20 Regional Review Meeting
07/11/2014
Civil society organizations from Europe and Central Asia call for action and accountability at Beijing+20 review
END_OF_DOCUMENT_TOKEN_TO_BE_REPLACED