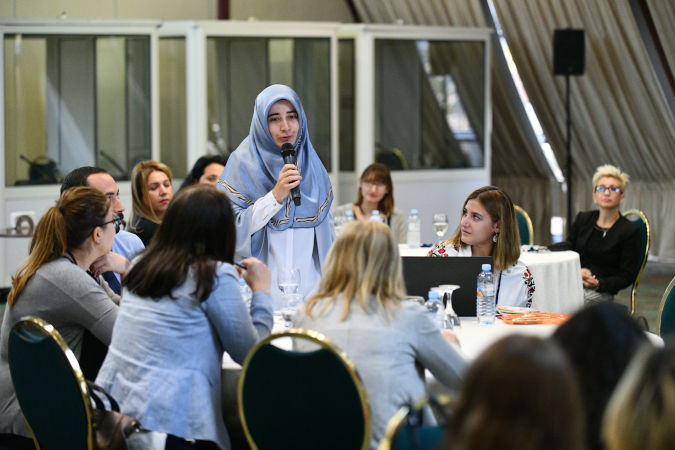 Participants discussed challenges and progress in achieving gender equality and women's rights. Photo: UN Women/ Darko Andonovski
Skopje, 2 October 2019 – Around 60 Representatives from the Western Balkans and Turkey gathered in Skopje, the Republic of North Macedonia, to discuss common achievements and challenges encountered in implementing the Beijing Declaration and Platform for Action. This Beijing+25 Sub-Regional Expert Consultation is the third in a series across Europe and Central Asia region that will contribute to the Beijing+25 Regional Review Meeting at the end of this month in Geneva.

The event in Skopje brought together high-level government representatives, governmental representatives responsible for implementing public policies ensuring gender equality and women’s empowerment, civil society organizations, academia and experts from the Western Balkans and Turkey. Together they assessed progress made by governments, shared good practices, discussed the structural barriers standing in the way of gender equality and women‘s rights, and put forward recommendations for future steps.

Ms. Mila Carovska, Minister of Labour and Social Policy, highlighted the important steps taken over the past 24 years to implement the Beijing Declaration and Platform for Action in North Macedonia. Talking about current efforts, Minister Carovska stated: “We are working on putting an end to harmful gender stereotypes and gender-based violence. Now, we are revising schoolbooks for children with the aim of preventing gender stereotypes in education.”

“This is the moment to reflect on what has been achieved; what challenges have emerged and how much further we still need to go," said Ms. Alia El-Yassir, Regional Director of the UN Women Regional Office for Europe and Central Asia. “Rather than tackling the issue of gender equality separately, this is a great opportunity to look at things in a holistic manner. UN Women stands behind the concept of tackling inequality, insecurity and injustice across the globe in a holistic way,” concluded Ms. El-Yassir.

“If we are to move the gender equality agenda forward, changing peoples’ mindset is crucial,” noted Ms. Vesna Ivanovikj-Castarede, Head of Office of UN Women in North Macedonia. 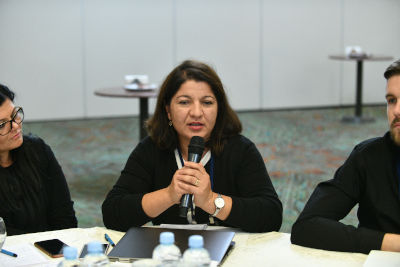 During the two-day working panels, the participants examined a number of important areas. These included: zero tolerance to violence against women and girls, their access to public services and financing, as well as empowering women through economic, innovation and technological advancements. Participants also explored women in decision making processes and good governance, alongside women, peace and security and the implementation of the UNSCR 1325. The role of the media, including social media, youtubers and influencers in challenging inequalities and accelerating gender equality was also scrutinized.

Ms. Manjola Vejzi, a participant from the Roma Women's Rights Centre in Albania, captured some of the insights from these discussions stating that Roma women were often blocked from participating because they lacked access to education, employment and finance. “The most sustainable way to encourage the empowerment of Roma women is through mentoring, continuous formal and informal educational and economic empowerment programmes,” she said.

Out of these lively discussions, an expert opinion paper will be developed describing the key achievements, gaps and challenges that impact the implementation of the Beijing Declaration and Platform for Action across the sub-region. Recommendations for the States and a way forward will also be made. The document will also highlight links between implementing the Beijing Declaration and Platform for Action and the Sustainable Development Goals.