Key governmental, regional, and civil society leaders came together in a regional forum in Tirana to commit their efforts and discuss progress toward the elimination of violence against women in the region and the implementation of the Council of Europe Convention on preventing and combating violence against women and domestic violence, also known as the Istanbul Convention, which remains key in addressing gender-based discrimination and violence. Convened by the Government of Albania, UN Women, the European Union, and the Council of Europe, the regional forum took place as part of the EU-funded regional programme ‘Ending violence and discrimination against women in the Western Balkans and Turkey: Implementing Norms, Changing Minds’, implemented by UN Women. 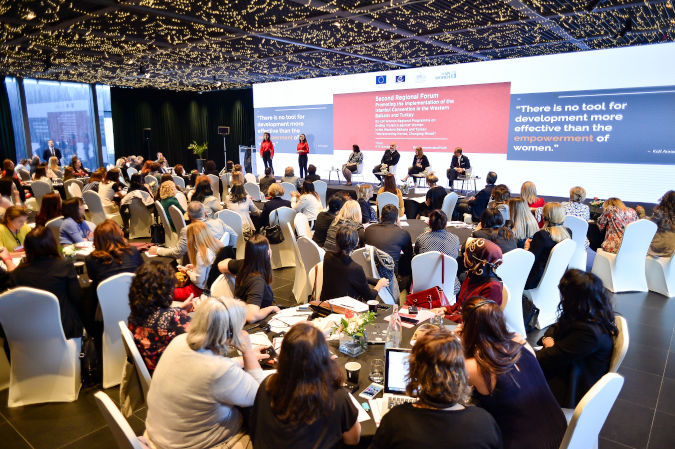 Second Regional Forum: Promoting the implementation of the Istanbul Convention in the Western Balkans and Turkey. Photo: UN Women/Eduard Pagria

Taking place on 9 and 10 October, the event brought together European Commission, EU Delegations and UN representatives, governments, civil society and regional institutions from the Western Balkans and Turkey. The event was organized within the framework of the EU-UN Women regional programme ‘Ending violence against women in the Western Balkans and Turkey: Implementing Norms, Changing Minds.’

The forum aimed to develop concrete proposals to improve inter-agency cooperation for a coordinated response to violence against women at the regional, national, and local levels. It also contributed to advancing the implementation of the provisions of the Istanbul Convention related to preventing all forms of sexual violence and to providing specialist support services for survivors of sexual violence.

The Istanbul Convention, as the first legally binding treaty in Europe that criminalizes different forms of violence against women and girls, provides a comprehensive framework for preventing violence against women, protecting survivors, punishing perpetrators, and establishing integrated policies and measures among the agencies and organizations tasked with preventing and responding to cases of violence.

"We have convened this forum to foster dialogue and regional cooperation among countries and between governments and civil society,” said Alia El-Yassir, Regional Director for UN Women Europe and Central Asia Regional Office. “We must ensure that survivors of sexual violence have the services and support they need, and we must eradicate any taboo or shame associated with reporting sexual violence. Ending violence against women is the responsibility of us all - each government, each community, and each individual."

"The EU is strongly committed to improve gender equality and women's and girl's empowerment,” Ambassador Soreca said. “Fighting against all forms of violence against women and girls, both in the public and in the private spheres, is a key area of action. The Spotlight Initiative is our new, global, multi-year initiative focused on eliminating all forms of violence against women and girls make sure that women and girls fully participate in all aspects of society. Without them, we will never achieve truly sustainable development for all."

“The Government of Albania has placed the gender equality agenda at the center of its development policies, undertaking a comprehensive approach to all areas and components of efforts to achieve gender equality. I am proud to be part of a government that is taking significant steps to advance gender equality, improve the political, economic and social status of women and fight against gender-based violence,” said Ogerta Manastirliu, Minister of Health and Social Protection of Albania.

According to Mapping of Sexual Violence Services in the Western Balkans and Turkey, a new research report conducted under the Implementing Norms, Changing Minds programme, there is a “serious gap in sexual violence services in the region,” said Anca Ciupa, coordinator for the Civil Society Strengthening Platform, a platform of women’s organizations established under the Implementing Norms, Changing Minds programme and led by WAVE Network. “Only in Albania, North Macedonia, and Serbia some sort of specialized sexual violence services were identified, which are often poorly implemented due to a lack of government funding and support.”

The three-year programme ‘Implementing Norms, Changing Minds’ aims at ending gender-based discrimination and violence against women in the Western Balkans (Albania, Bosnia and Herzegovina, Kosovo[1], North Macedonia, Montenegro, Serbia) and Turkey, with a particular focus on the most disadvantaged groups of women. The programme is working to strengthen the capacity of women’s organizations to hold governments to account, advocate for effective implementation, and monitor prevention of and response to violence against women. The programme also promotes the full implementation of legislative frameworks on ending violence against women and works to transform gender-discriminatory stereotypes, perceptions and beliefs.

More information and regular updates on the programme can be found on the website: http://eca.unwomen.org/en/what-we-do/ending-violence-against-women/regional-programme-in-the- western-balkans-and-turkey.

Follow the hashtags #IstanbulConventionForum and #changingmindstoEVAW for social media updates.