TAKE FIVE: “Femicide is fueled by patriarchal social norms and changing minds is of utmost importance” 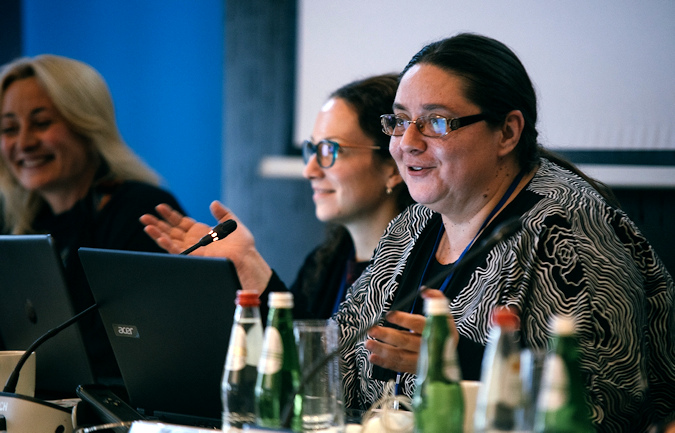 Kosana Beker is a renowned women’s rights activist in Serbia, and author of numerous publications and academic papers in the field of gender equality. She also worked as Assistant Commissioner for the Protection of Equality. Currently, she is Program Director of FemPlatz, a civil society organization working with the Gender Knowledge Hub NGO and the Women’s Research Center on a femicide review investigation, conducted in the context of the EU-UN Women regional programme, ‘Implementing Norms, Changing Minds’. Beker spoke to UN Women about her investigation and the importance of effective prevention and protection approaches to end femicides in Serbia.

As part of your work with the regional programme, you’re conducting a research on femicide. What have you found so far?

Unfortunately, there are a lot of femicides in Serbia. In fact, only this year more than 27 women have been murdered. This research will enable us to better understand the dynamics, forms and nature of femicide in Serbia. We are at the beginning of our project, thus we cannot give any conclusions in advance. At this moment, we can say that statistics and records are not kept well. For example, some courts informed us that they do not have gender disaggregated data, hence they couldn’t provide information on cases of femicides since their records are based on perpetrators and not on victims. There is also no information about relations between perpetrators and victims of femicide, which is very important for femicide research. So far, we have conducted in-depth interviews with 11 women’s NGOs that provide support to survivors of violence. An interesting finding is that so far, none of the women who had used services of these organizations were victims of femicide.

What is fueling femicide in Serbia?

As in many other countries, femicide is fueled by patriarchal social norms. We believe that ‘changing minds’ is of utmost importance in Serbia, for all – citizens, stakeholders, judges, prosecutors, social workers. Some men in Serbia still consider women as their own property, thus all forms of violence against women (VAW) is still widely spread. Although there are some improvements, mostly in the legislative aspect and the acknowledgment of violence, actors mandated with protection from violence are not well coordinated, leaving space for gaps in the protection system which can result sometimes in the death of women.

What is the scope of your research?

Although we would like to have a database of every murdered woman in Serbia, our research relies on data (final court decisions) from 2015-2017. We are exploring gaps in the protection system and the capacities of all relevant stakeholders in order to propose multisectoral protocols and guidelines to provide better protection for women, including an assessment of risk factors that can lead to the prevention of femicides. Our role as a civil society organization is to identify and highlight the challenges, issues, and barriers facing women in the Serbian protection system and advocate for its constant improvement in addition to a zero-tolerance approach towards violence against women.

Cases of violence against women and femicide are all over the news in Serbia. How do you think these events are being covered by the media?

Media should be our ally in the prevention of violence against women, but they are usually interested in sensationalized reporting. In my opinion, they do not contribute to the prevention of violence against women as much as they could, but rather reinforce gender stereotypes and prejudices. Some media outlets disclose very sensitive personal information about victims of femicide, including their pictures, and even sometimes they try to justify the perpetrators’ behavior – for example by saying “he was jealous”, “he is a good man when he’s sober” etc.

Thousands of women around the world have taken to the streets in the last few years to protest against femicide and patriarchal violence. Do you think we will see a mobilization of this kind in Serbia?

Thanks to the Autonomous Women’s Centre – a Belgrade-based women’s NGO dealing with violence against women for many years, and the Network of Women against Violence, we instituted 18 May as the Remembrance Day for Women Victims of Femicide [starting this year].  It should be noted that in previous years, different women’s organizations in many cities in Serbia have demonstrated against femicide. An important step would be to have greater support and understanding of the nature and scope of femicide in Serbia, so that the support network can be widened, to collaborate on a greater social mobilization in favor of the movement.