Take Five: “Patriarchal culture is one of the biggest barriers in ending violence against women” 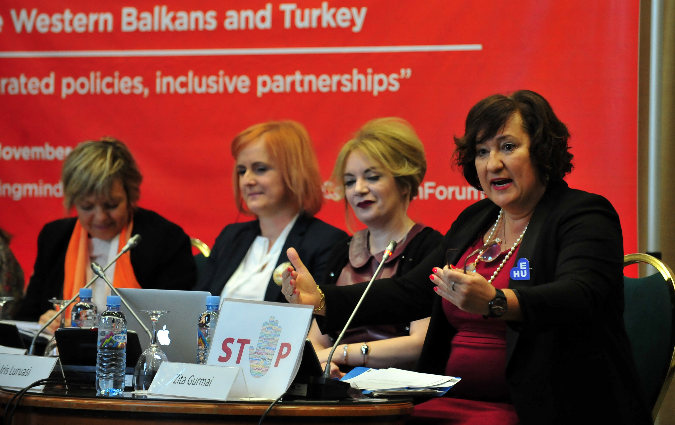 Hungarian MP Zita Gurmai (First from right to left) chaired a session at the recent Regional Forum on the implementation of the Istanbul Convention held in Skopje, North Macedonia. Photo: UN Women/Darko Andonovski

Zita Gurmai is a Member of the Hungarian National Assembly, Vice-President of the Hungarian National Group of the Inter-Parliamentary Union, and member of Parliamentary Assembly of the Council of Europe. Throughout her career she has supported numerous organizations aimed at promoting gender equality and women’s political participation. Ms. Gurmai holds a Ph.D. in Economics from Karl Marx University of Economic Sciences in Budapest. She recently participated in the Regional Forum: Promoting the Implementation of the Istanbul Convention in the Western Balkans and Turkey, organized within the frameworks of the EU-UN Women Regional Programme on Ending Violence against Women “Implementing Norms, Changing Minds”.

How did you become an advocate for gender equality and ending violence against women?
I have always considered myself an advocate for gender equality. From a very young age and throughout my studies, I have questioned the role given to women in society and developed a strong feminist spirit, aspiring to societal change and a life free from discrimination and violence for all. I created several foundations dedicated to the promotion and protection of women’s rights and the fight against violence against women before and during my political career. I have been the Head of the Party of European Socialists Women (PES Women) for more than 15 years and have held parliamentary mandates at the national level and at the European Parliament. I advocate whenever possible for a higher participation of women in politics, which could be a game changer regarding progress on these issues.

Based on your experience, what do you think are the biggest barriers in ending violence against women in the region? What do you think that there has to be a greater focus on in the future?
In my view, patriarchal culture is one of the biggest barriers in ending violence against women in the region. Violence against women is considered as a private matter that should be dealt with privately within the family or relationship. Women fear reporting violence since they might be told that they have encouraged such acts. Education is another barrier. As long as gender equality is not made a priority topic and mainstreamed throughout the education system, a patriarchal system will perpetuate. Violence against women finds its origin in the deeply rooted thought that men are superior to women and that they should assert their dominance. Education will be the main trigger of a change of mindsets and for the promotion of zero tolerance for gender-based violence.

During the Regional Forum on the Istanbul Convention, you delivered the session ‘A holistic response to violence against women: Integrated policies and data collection’. What would you say is the key take-away from this session?
The Istanbul Convention is the most comprehensive international legal instrument worldwide for preventing and combating violence against women. It aims at having a holistic approach covering four key aspects: prevention, prosecution of the offenders, protection of the survivors and integrated policies. None of these aspects can be neglected if we are to put an end to violence against women. By signing and ratifying the Istanbul Convention, countries are obliged to adopt comprehensive policies and measures for preventing violence, protecting the survivors and ensuring that there will be no impunity for perpetrators. State parties need to implement coordinated policies and involve several stakeholders, such as government agencies, NGOs, parliaments, local authorities, the judiciary and the police. The preparation of national action plans to prevent and combat violence against women can draw a frame for cooperation between multiple stakeholders.

What action, since being a member of the Council of Europe Parliamentary Assembly Committee on Equality and non-Discrimination, do you feel has had the biggest impact on ending violence against women in the region?
Our attention is now not only on promoting the ratification and implementation of the Council of Europe Convention on preventing and combating violence against women and domestic violence (Istanbul Convention), but mostly on defending the Convention. We explain the provisions of the Convention, which is the most advanced international legal instrument to prevent and combat violence against women. There are many attacks against the Convention based on misinformation about its content. Some politicians, political parties, religious institutions and faith-based NGOs have waged an ideological war against the Istanbul Convention, arguing that it runs against traditional or family values and that it tries to introduce a third gender or legalize same-sex marriage. We work on breaking the myths around the Convention and sharing information about its added value. The Convention has already contributed to saving hundreds of lives, served as a basis for the introduction of new criminal offences of forced marriage, stalking and female genital mutilation. The Convention has led to the modification of law provisions concerning rape and has contributed to additional and improved support services, including telephone helplines and shelters. We need to continue our action as parliamentarians to inform the general public about what the Istanbul Convention has helped to achieve.