Take five: “Thanks to the Beijing Declaration, violence against women is discussed openly and is no longer solely a private, family issue” 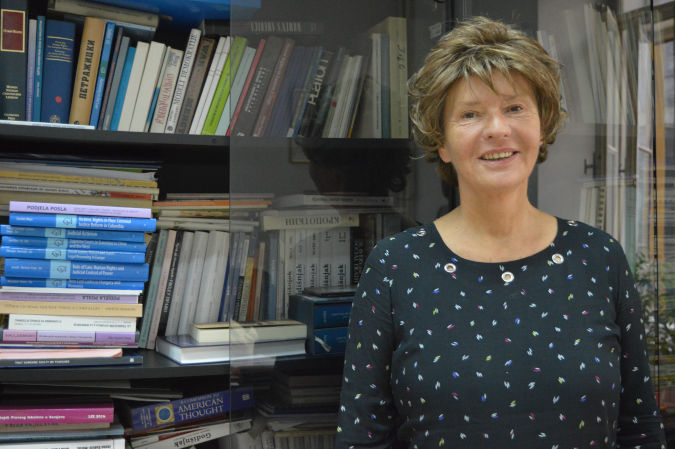 Professor Jasna Bakšić Muftić, 58, teaches Theory of Law and State at the University of Sarajevo, Bosnia and Herzegovina. She was part of the Bosnia and Herzegovina delegation at the Fourth World Conference on Women in Beijing in 1995. She was a member of the civil society organization MAK Bosanka and a law expert and activist who spoke out for women’s rights, including the rights of survivors of conflict-related sexual violence. Ms. Bakšić Muftić shares her views on the importance of the Beijing Declaration and what is still needed to achieve gender equality by 2030.

In 2020, we will celebrate 25 years since the adoption of the Beijing Declaration and Platform for Action. Why was such an agenda for women's rights and gender equality needed?

The fourth conference addressed new topics: education of women, malnutrition, access to food, water, questions of employment and health. The biggest debates revolved around two questions: reproductive rights, which is relevant today, and violence against women. Another new topic emerged around wartime rapes, using women as means of war, and the need for women’s special protection in such circumstances that would complement the Geneva conventions and other international conventions.

The value of this agenda was that violence stopped being a private and family affair between a husband and wife and was recognized in public, and as a form of violence in conflicts.

The Beijing Declaration would later lead to international law recognizing conflict-related sexual violence, included in the catalogue of human rights. Before that, rape was part of the international convention on the prohibition of torture and was listed as torture. Now it was specifically recognized as war rape. This was significant.

What has changed regarding gender equality and women's and girl's rights in the last 25 years across the region and your country?

Progress has been made in education. Certain issues are included in curricula, maybe not enough, but the process of social change has been initiated. My father, who was born in 1933, was the first generation of men in his family who had a wife with a job. His mother was a housewife, his mother's mother was a housewife, and his wife suddenly has education and a job. It was a shock – a cultural one, a family-related one. New questions have been opened up and discussed. Social processes take a long time, but they have been initiated.

What three main issues in the field of gender equality would you like to draw attention to the national authorities?

There is a need to strengthen institutional mechanisms. After Beijing, the governments had an obligation to create them. In Bosnia and Herzegovina, gender centers were established in the Federation of BiH and Republika Srpska, along with the Agency for Gender Equality. The Parliamentary Assembly founded a commission on gender equality, and the Ministry for Human Rights and Refugees was also created. Their budgets reflect that there is no real commitment to these things. Rather than strengthen equality, political platforms point to exclusion, particularly of marginalized groups, including women, national minorities, Roma people, and the most vulnerable group, LGBTIQ people.

Also, political parties should foster the capacities of women, because political life starts with political parties. And, I believe we do not view human dignity as a fundamental aspect of human rights for everyone.

No country has achieved gender equality. As you said, these processes take a long time. What should Bosnia and Herzegovina do to achieve gender equality by 2030, as a commitment to achieve the Sustainable Development Goals?

The government needs to shape policies that address women’s specific economic needs like paid maternity leave, benefits, kindergartens, co-financing, flexible working hours, and services. Without such support, you just get by. The pattern perpetuates of grandmothers and grandfathers taking care of the kids, and paying other women to take care of the children.

What is your message to the new generation of women and men activists?

This fight is never exclusively female. It is about mutual communication and understanding because there is always a double dimension to everything. People must trust themselves, and act, even if things seem impossible. Be brave. Courage is key.