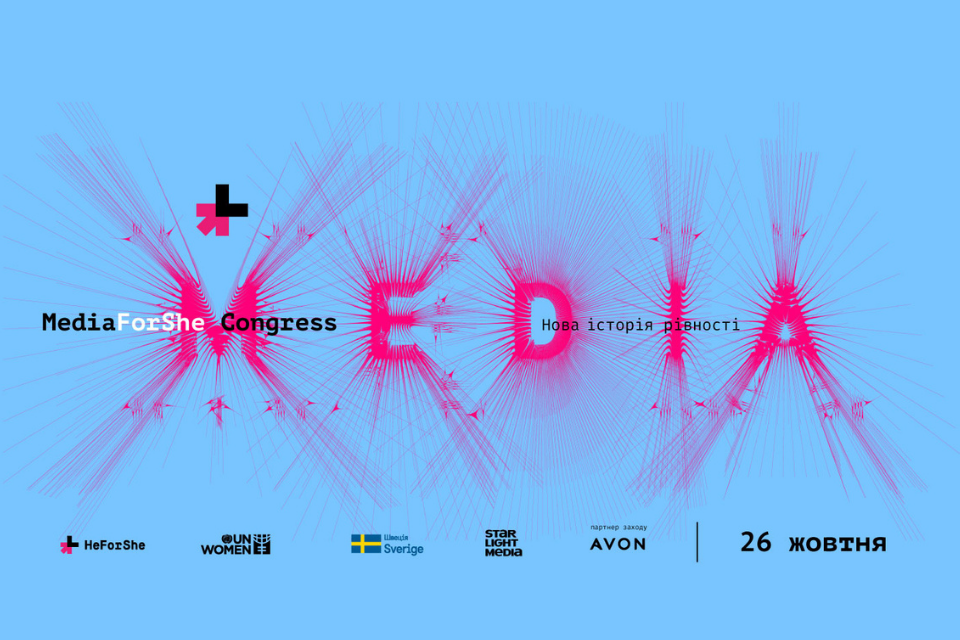 UN Women's global movement for gender equality, HeForShe, in partnership with StarLightMedia group, launches a dialogue on gender equality with Ukrainian media. MediaForShe Congress is an event where Ukrainian media will talk about changing approached to women's representation in the media and the creation of non-discriminatory content.

For the last four years, UN Women has been organizing the HeForShe Congress in Ukraine annually. This event unites progressive businesses from different fields on gender equality and non-discrimination.

“Stereotypes and underrepresentation of women and women’s voices in the media play a significant role in shaping biased attitudes, disrespect, and even violence towards women and girls. Together with key stakeholders in this field, we call for a balanced and non-stereotyped portrayal of women in the media,” says Erika Kvapilova, UN Women Country Representative in Ukraine.

This year, the HeForShe Congress will be focused on the role of media in the achievement of gender equality. In partnership with the first Ukrainian media group to have signed the Women's Empowerment Principles — StarLightMedia, the Congress will unite representatives of all types and genres of media, including socio-political and entertainment media.

The main goal of the MediaForShe Congress is to trigger positive changes in the Ukrainian media industry.

“I am convinced that the media can change the world for the better, we have seen a lot of evidence of this in our work. With this belief in the wider responsibility of our industry, its capabilities and partnership, the MediaForShe Congress is created. It is a platform to unite the capacities of all media, creators who share the value of gender equality and our responsibility to achieve it. Together, we can create a new history — a history of equality that inspires and sustains the potential of women, combats gender stereotypes and outdated norms that underlie discrimination and violence. We are grateful to UN Women in Ukraine, to all media leaders who have already declared their readiness to join theMediaForShe, and to those who will join the process. This goal also inspires a task that we can do together,” says Oleksandr Bohutskiy, CEO of StarLightMedia group.

Organizers of the Congress developed a Commitment Constructor, a unique tool for media managers, creators, journalists, editors, and other stakeholders, to promote ideas of gender equality in Ukraine.

The online stream of the MediaForShe Congress will be available on UN Women Ukraine Facebook page.

Created by UN Women, the HeForShe solidarity movement for gender equality provides a systematic approach and targeted platform for men and boys to engage and become change agents towards the achievement of gender equality. Since its launch in 2014, hundreds of thousands of men from around the world, including Heads of State, CEOs, and global thought-leaders, from all walks of life have committed to gender equality. The HeForShe movement in Ukraine is implemented with the financial support of Sweden.

Related News
20/09/2021
First HeForShe University Tour kicks-off in Ukraine
29/07/2021
Ukrainian girls show women’s strong potential in science
10/11/2021
From Where I Stand: “When we do not give up, when women support each other, we can always succeed” says Hive director
19/10/2021
Turkish Women Olympians Make History
15/10/2021
Despite the pandemic, rural women in Kazakhstan launch their own businesses
END_OF_DOCUMENT_TOKEN_TO_BE_REPLACED