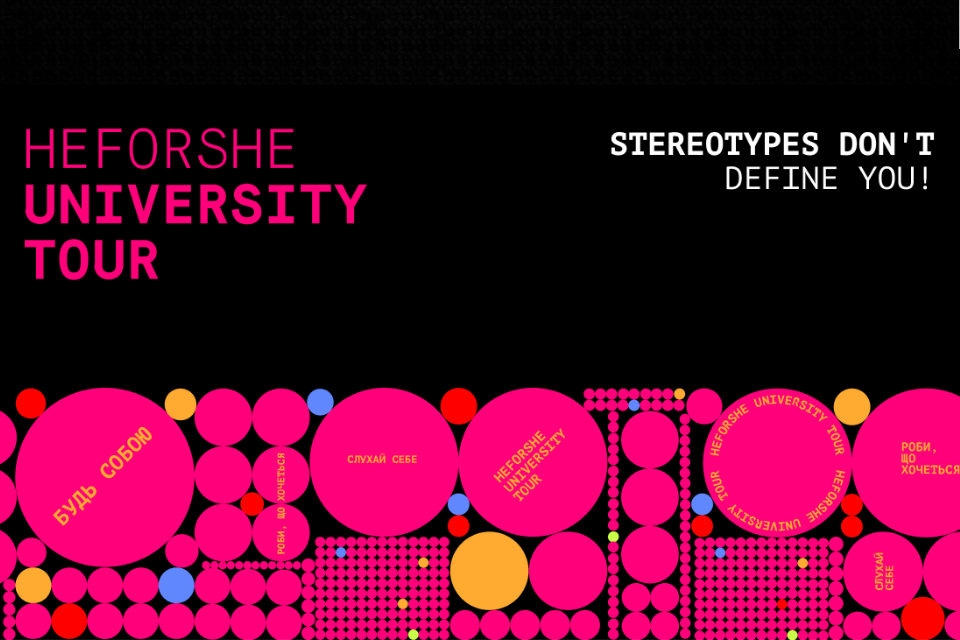 The HeForShe movement in Ukraine is launching a dialogue with students on gender equality, with a focus on stereotypes and discrimination.

UN Women's HeForShe solidarity movement for gender equality is going on a University Tour, which will feature five universities in Ukraine. The HeForShe University Tour has already taken place in the United States, Canada, the United Kingdom, France and Thailand. After the Tours, HeForShe clubs were created at universities — places where youth who care about gender equality are concentrated and where discussions on the issue are happening. From September 16–29, Ukrainian students and teachers will talk about stereotypes, sexism, discrimination and violence.

Most people in the world experience sexism and stereotyping. Generation Z (people under the age of 30), make up roughly half the world's population. And, according to a recent global study by the HeForShe movement, gender equality is among their top five concerns.

Students often find themselves in situations that undermine their confidence, which prevents them from expressing their personality and realizing their ambitions, desires, and dreams. The reason for this can be gender-based discrimination at home, harassment or even violence, which are sometimes silenced.

An educational film will premiere at the HeForShe University Tour. The film features the Deputy Minister of Foreign Affairs of Ukraine, Emine Dzhaparova, alongside singers Dmytro Shurov and Alina Pash. Others featured include journalist Michael Schur, the host and director of the Wild Theater Yaroslava Kravchenko, designer Ivan Frolov, ReFace Head of Product and Growth Maria Ponomarchuk, official makeup artist for Maybelline New York in Ukraine Mitya Hrybko, and football referee Sofia Prychyna. Produced especially for Ukrainian students, in the film these prominent people share their stories about stereotypes as well as their search for inner confidence and freedom from the opinions of others. After watching the film, students will have the opportunity to discuss the topics of discrimination, sexism, tolerance and gender equality with experts, opinion leaders and friends of the HeForShe movement. From 1 October, the film will be publicly available on YouTube for everyone to organize screenings in their educational institutions and youth organizations.

Created by UN Women, the HeForShe solidarity movement for gender equality provides a systematic approach and targeted platform where men and boys can engage and become change agents towards the achievement of gender equality. Since its launch in 2014, hundreds of thousands of men from around the world and all walks of life, including Heads of State, CEOs, and global luminaries, have committed to gender equality. The HeForShe movement in Ukraine is implemented with the financial support of Sweden.

Related News
24/06/2021
TV and video lessons sharpen students’ civic competencies in Kyrgyzstan
26/10/2021
MediaForShe Congress kicks-off a dialogue on gender equality with the media in Ukraine
25/08/2021
In the words of Jelena Mladenović: “The hardest part is to realize what could, in my article, benefit the victim and what could possibly harm her”
11/08/2021
Giving young people the tools to overcome stereotypes
03/08/2021
In the words of Vitalina Romanenko: “I am proud of myself. I am a strong woman.”
END_OF_DOCUMENT_TOKEN_TO_BE_REPLACED