Kyiv, June 2021— As part of the Generation Equality campaign, the “She is Science” charity soirée and awarding ceremony of 12 winners of the all-Ukrainian essay contest took place in Kyiv, organized by the youth-led NGO STEM is FEM with the support of UN Women and UNICEF. The campaign aimed at recognizing women’s role in innovation and technology, and mobilize government and private sector partners to invest in women’s potential in science and IT. 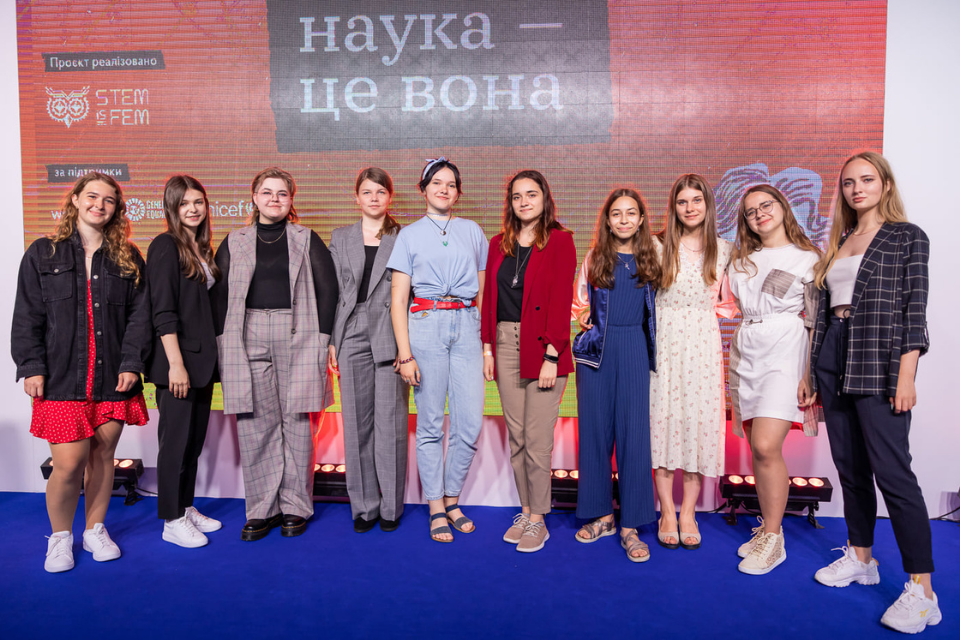 She is Science charity soiree and awarding ceremony of 12 winners of the all-Ukrainian essay contest. Photo: UN Women Ukraine/Anton Kulakovskiy

The campaign “She is Science” started back in February 2021 when a group of recognized illustrators created a series of 12 portraits of the trailblazing women innovators in Ukraine some of whom are mathematician, physicist, cyberneticist, ornithologist, neurobiologist, and more. The contest mobilized talented, young women and girls around the creative task of paying tribute one of these 12 outstanding Ukrainian women scientists and their contribution in science and technology in their essays. 561 girls aged 14-21 from all over Ukraine took part in the competition. Anastasia Suvorova from Kyiv, the author of an essay on ornithologist Natalia Atamas, received the Grand Prix prize. Anastasia received a $ 4,000 grant for education provided by the NGO STEM is FEM.

With the private sector partners, this charity event raised $ 43,600 to support girls in their career and training in the STEM field and has mobilized a network of supporters of women in tech from the international sector, government and business.

The First Lady of Ukraine, Olena Zelenska, attended the event to have a conversation with girls leading the path to Ukraine’s future. Olena Zelenska discussed the role of youth and women in the decision-making process in modern Ukraine with young activists.

"I want us to use the word "star" in our society not only when it comes to show business or sports, but to have more and more famous and popular science stars!" said Olena Zelenska.

“The girls who participated in the ‘She is Science’ project are examples of young scientists and leaders of the future who proved that there are no male and female occupations. Humanities, technology, science and art are for all genders. And thanks to such young people, we are moving towards Generation Equality,” said Erika Kvapilova, UN Women Ukraine representative during the awarding ceremony.

“She is Science” is a part of the UN Women Generation Equality campaign. Collectively, change-makers of all ages and genders can tackle the unfinished business of empowering women through a new, groundbreaking, and multigenerational campaign: "Generation Equality: Realizing women's rights for an equal future".

Related News
26/10/2021
MediaForShe Congress kicks-off a dialogue on gender equality with the media in Ukraine
20/09/2021
First HeForShe University Tour kicks-off in Ukraine
10/11/2021
From Where I Stand: “When we do not give up, when women support each other, we can always succeed” says Hive director
19/10/2021
Turkish Women Olympians Make History
15/10/2021
Despite the pandemic, rural women in Kazakhstan launch their own businesses
END_OF_DOCUMENT_TOKEN_TO_BE_REPLACED