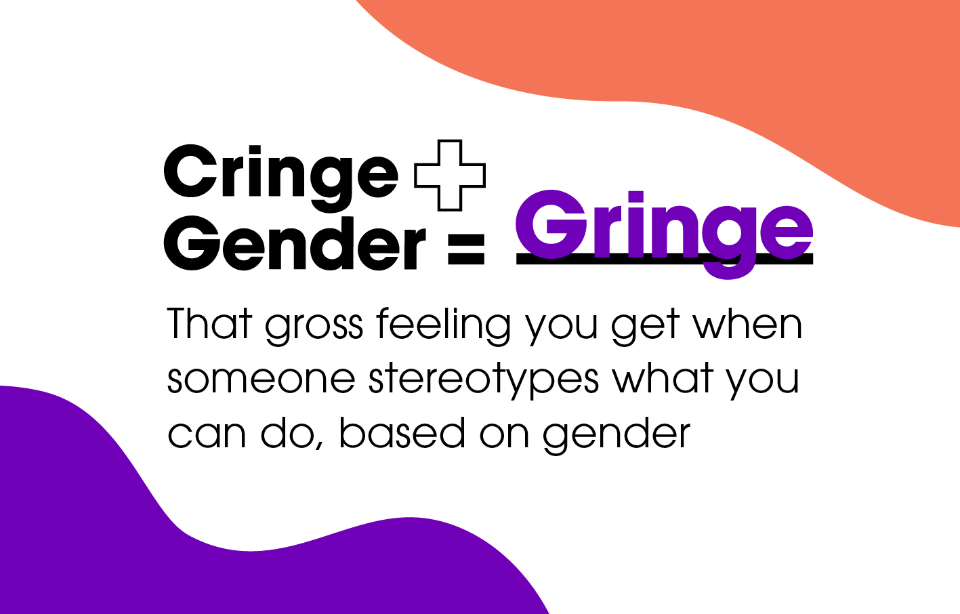 The No More Gringe campaign, which combined the word “cringe” with the G from “gender” to describe the embarrassment felt when people buy into gender stereotypes, launched in April 2021.

The campaign leveraged the popularity of 15 of the most popular TikTok influencers in Ukraine. Each chose the theme of their video from a collection of common stereotypes, like "Women should do the cooking," "Men don't cry," "He didn't fight - not a man," or "Men don't take good care of children, it's a mother's job."

The young influencers used role play, interviewing, and other techniques to question and overturn stereotypes. Their one-minute videos were published on TikTok, Instagram, YouTube and Facebook, with the hashtags of #GRINGE and #NOMOREGRINGE.

The project surveyed 175 teenagers aged between 13-19 years old in 25 cities in Ukraine and the idea for the video campaign followed.

The campaign makes “outdated gender bias issues visible,” said 15-year-old Alyona Sheshenya in Ukraine. ”Teenagers not only raise their own awareness in the field but also learn to ignore stereotypes.”

The #NOMOREGRINGE hashtag speaks to the embarrassment felt when someone applies gender stereotypes or voices them.

“People feel ashamed, have to comply with social expectations, and fail to be their true selves,” said Iryna Rubis, founder of Biasless and the creator/producer of #NOMOREGRINGE. “Society, in turn, loses so many talents that could be manifested in various fields and areas.”

“Breaking gender stereotypes is a very long process. No matter if it takes years, we should not give up!” said 16-year-old Anna Madzigan. "Who knows, maybe one boy from the first grade will try to dance ballet and he will like it? Or a girl who is fascinated by the idea of becoming a boxer? Everything is in our hands!”

The NoMoreGringe video campaign was produced as part of the "EU 4 Gender Equality: Together against gender stereotypes and gender-based violence" project, funded by the European Union and implemented jointly by UN Women and UNFPA. The videos’ contents are the sole responsibility of the producers and do not necessarily reflect the views of the European Union.

Related News
08/02/2022
In the words of Marharyta Meleshkova: “We can reach any height. The main thing is to overcome the stereotypical barriers that exist only in our heads”
01/12/2021
In the words of Natalia Tiuniahina: “My biggest inner need is to help women accept their status, to teach them to live a full life with HIV”
30/10/2021
Representatives of 15 Ukrainian media participated in the MediaForShe Congress
10/12/2020
Press Release: Bold grassroots campaign, Fight Like a Girl, teaches self-defense to women and girls in Ukraine, with support from the European Union
14/07/2020
UN Women, UNFPA and EU launch ambitious initiative for gender equality in Eastern Partnership
END_OF_DOCUMENT_TOKEN_TO_BE_REPLACED