With support from the European Union, the two UN sister agencies will work with government bodies and civil society partners in six countries to challenge deeply ingrained gender stereotypes, increase men’s involvement in domestic work and childcare, and engage with potential perpetrators to prevent gender-based violence. 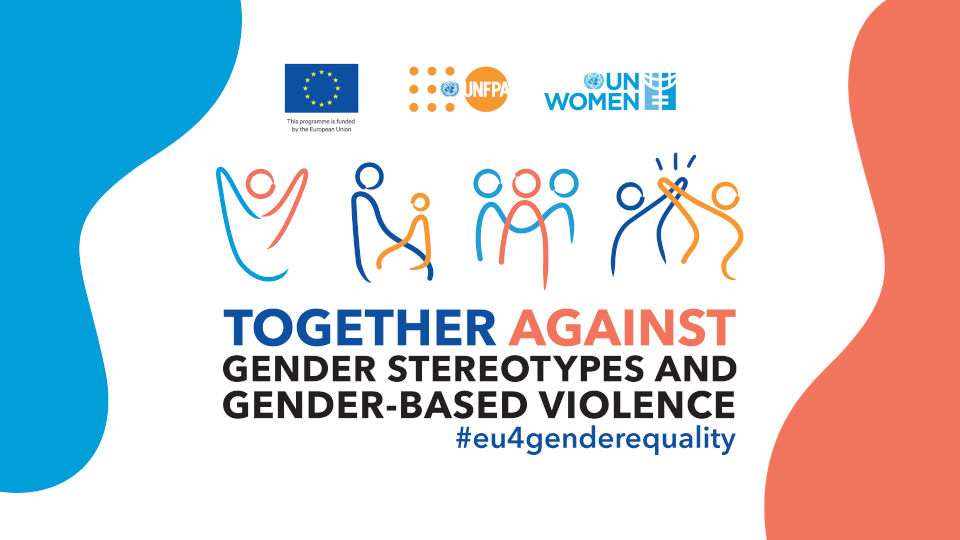 Istanbul, 14 July 2020 – UN Women and UNFPA, together with the European Union (EU), have launched a three-year regional programme to tackle gender stereotypes and gender-based violence in six countries of the Eastern Partnership: Armenia, Azerbaijan, Belarus, Georgia, Moldova, and Ukraine.

The programme, entitled “EU 4 Gender Equality: Together Against Gender Stereotypes and Gender-Based Violence,” ultimately seeks to strengthen equal rights and opportunities for women and men by challenging perceptions about men’s and women’s roles in the family and in society and working to eliminate gender-based violence.

“During the COVID-19 crisis, we have unfortunately seen an increase in women’s unpaid care workload and in cases of gender-based violence across the six countries,” says Alanna Armitage, UNFPA Regional Director for Eastern Europe and Central Asia. “Our programme comes at the right time to fight these trends. We all have to work hand-in-hand to build a more just, equal, safe and secure world for all.”

“This is our first regional programme covering gender equality in the Eastern Partnership region and we are intensely proud of it,” said Lawrence Meredith, Director for Neighbourhood East in the Directorate-General for Neighbourhood and Enlargement Negotiations at the European Commission. “We can and we will do more to develop this underused economic and social potential with our Eastern neighbours. As we emerge from the pandemic, we will propose that the future Eastern Partnership be more inclusive.”

A first of its kind, the programme has been informed by an in-depth situation analysis and intergovernmental consultations with the six countries. It is designed to engage a wide range of government bodies, civil society organizations, and individuals.

“We will work closely with governments and civil society organisations in the six countries to ensure the success of the programme,” says Alia El-Yassir, UN Women Regional Director for Europe and Central Asia. “This work is even more crucial now as the COVID-19 crisis has put into stark relief the imbalanced distribution of responsibilities based on traditional gender stereotypes.”

The programme has a budget of €7,875,000 and is anchored in the Sustainable Development Goals (SDGs) framework, launched by the United Nations in 2015, and the EU Action Plan 2016-2020 on Gender Equality and Women’s Empowerment: Transforming the Lives of Girls and Women Through EU External Relations. It provides a unique opportunity for the EU and the six participating countries to affect social discourse, perceptions, and practices related to gender equality with the ultimate goal of achieving gender equality and related SDGs.

About the European Union:

The European Union is made up of 27 Member States who have decided to gradually link together their know-how, resources and destinies. Together, during a period of enlargement of 50 years, they have built a zone of stability, democracy and sustainable development whilst maintaining cultural diversity, tolerance and individual freedoms. The European Union is committed to sharing its achievements and its values with countries and peoples beyond its borders. For more information, please visit: https://europa.eu/european-union/.

UN Women is the UN organization dedicated to gender equality and the empowerment of women. A global champion for women and girls, UN Women was established to accelerate progress on meeting their needs worldwide. The UN Women Regional Office for Europe and Central Asia was established in Istanbul in 2014. For more information, please visit: https://eca.unwomen.org/en.