HeForShe Congress examines how to speed up gender equality in Ukraine 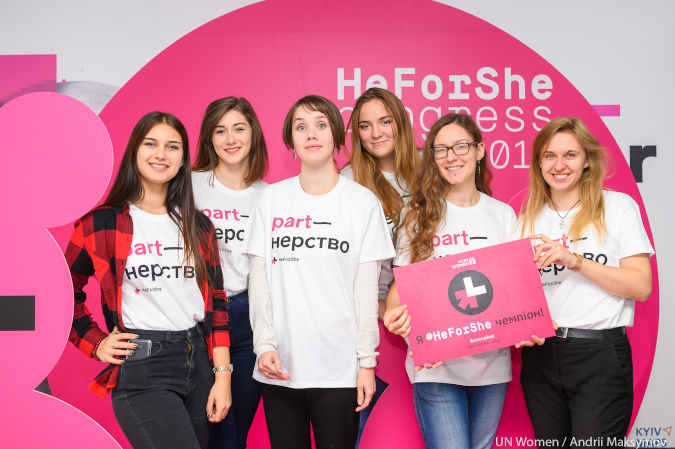 At Ukraine’s HeForShe Congress, equal numbers of women and men discuss Ukraine’s gender equality realities – and how to speed up change in business and throughout society.

Held at the M17 Contemporary Art Center in Kyiv, the meeting began with an in-depth look at a recently concluded social experiment to mainstream gender in Ukrainian society. During the experiment, seven male industry leaders – supported by seven female mentors – analysed for 21 days the pros and cons of implementing gender equality in their business. They then shared their experience and thoughts with attendees.

One of the speakers was struck by the widespread sexism in TV advertising.

“I began by watching TV ads. They always portray a woman as a housewife, a bad leader, a hysterical or unstable person. It's a vicious, outdated, bad circle – the people who create these ads don’t even notice their sexism,” said Serhiy Vovk, co-founder and curator of Kyiv Academy of Media Arts.

“Advocating for equality means being strong, unafraid, open to new opportunities. If men are raised in a tradition that they should be leaders and hold power, then they need to understand that being a leader means advocating for gender equality,” noted Dmytro Kuleba, Vice Prime Minister of Ukraine for European and Euro-Atlantic Integration of Ukraine.

One corporate participant discussed the mechanics of setting up a corporate code of conduct. 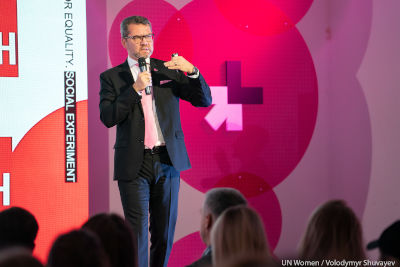 “We want to make gender equality a part of our corporate culture and company strategy and we’re finalizing a Code of Ethics with a non-discrimination policy. Although we’re only at the beginning of this journey, we feel it’s important to have two systems of mentorship: HeForShe and SheForHe,” said Michael Tsarev, CEO of StarLightMedia group.

Three panels highlighted popular perspectives. Popular TV personalities and HeForShe Ukraine advocates Roman Vintoniv and Yaroslava Kravchenko discussed jokes about feminism – and their limits – and how to connect with the public about feminism.

“The most striking discrimination in literature begins when male writers tell you how to write, how a woman should think, how she should express herself, how a woman's physicality should function in literature,” said Kateryna Kalytko, writer and poet, winner of Women in Arts Award 2019.

“Seeing so many new faces today means that the movement is growing and is taking a new life and we are looking forward to the results that this new experiment can bring,” said Anastasia Divinskaya, UN Women Ukraine Representative. 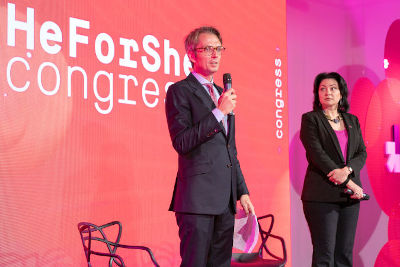 In Ukraine, HeForShe is made possible with support from the Government of Sweden.

“The Swedish government’s priorities in the HeForShe campaign are to ensure workplace equality, increase the number of women in top and middle management and improve equality in health care – all areas where women remain marginalized and face discrimination,” said H.E. Tobias Thyberg, Ambassador of Sweden to Ukraine.

Initiated by UN Women, HeForShe is a global solidarity campaign that invites people – particularly men and boys – to make a visible, positive statement for gender equality. Since its Ukraine launch by UN Women in 2018, HeForShe Ukraine has developed strategic partnerships and public events across the country to promote gender equality.

Related News
06/07/2018
Committing to becoming agents of change at HeForShe Congress in Ukraine
12/11/2020
New book ‘Luna & the Planet of Fireflies’ published in the framework of the MenCare Campaign
13/09/2018
Gender Equality in the spotlight at Ukraine Fashion Week
20/06/2016
Moldova takes historic step to promote gender equality in politics
08/02/2022
In the words of Marharyta Meleshkova: “We can reach any height. The main thing is to overcome the stereotypical barriers that exist only in our heads”
END_OF_DOCUMENT_TOKEN_TO_BE_REPLACED