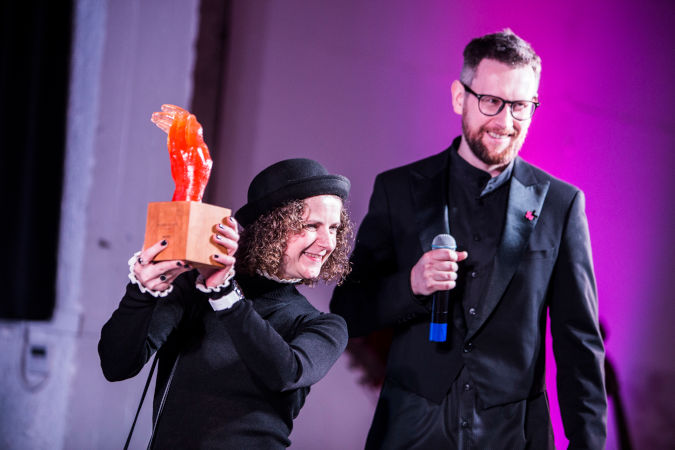 The representative of the winner of HeForShe Women in Arts Award in Music, Nina Harenetska (left), receives the prize.  Nina Hlanevych, member of Dakh Daughters band and Yurii Marchenko (right), the host of the event. Photo: UN Women/Volodymyr Shuvayev

In March this year, Ukraine participated in the HeForShe Arts Week, a global week of awareness and action to celebrate gender equality in culture and arts, for the second time. To commemorate the first anniversary of the HeForShe movement in Ukraine and to recognise Ukrainian female artists of the past and present, UN Women, in partnership with the Ukrainian Institute, a state institution that represents Ukrainian culture internationally, has established the Women in Arts Award.

The purpose of this all-Ukrainian award is to support and promote the professional advancement of women in the field of Ukrainian arts and culture nationally and internationally, as well as to break gender stereotypes and eliminate inequalities.

The main criteria for the candidates are their professional achievements, innovativeness and national or international recognition.

Winners were selected in the following five nominations:

“We must fight to win. We will replenish our teams. We will engage some people with positive influence, someone with a positive impetus. Everything will be magenta,” said the Minister of Foreign Affairs of Ukraine, Pavlo Klimkin, at the opening ceremony of the Award.

The award ceremony took place on 13 March 2019. The names of the jury members, finalists and award regulations are published on the project’s website.

The Women in Arts 2019 statuette was created by the contemporary Ukrainian sculptor Maria Kulikovska in the form of interlaced women’s hands. The artist says that the hands symbolize support and protection for women’s labour, from both men and women.

The HeForShe movement in Ukraine is supported by the Government of Sweden.

Related News
16/08/2019
Odesa International Film Festival joins global HeForShe movement
03/07/2019
Hey guys: Gender equality is not so complicated – and it’s good for you!
18/10/2018
UN Women calls for the realization of the human rights of Roma women in Ukraine
02/12/2021
I am Generation Equality: Amiran Karatsev, advocate for women’s rights and feminism
04/11/2021
I am Generation Equality: Gresa Hasa, feminist activist
END_OF_DOCUMENT_TOKEN_TO_BE_REPLACED