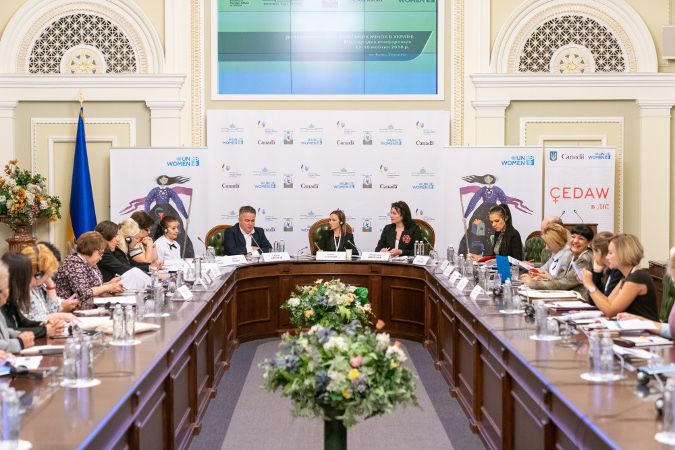 On 17-18 October, UN Women organized the international conference “Realizing the rights of Roma women in Ukraine,” in close partnership with the Parliament, the Ministry of Foreign Affairs of Ukraine and the Roma Women Fund Chiricli, in Ukrainian capital Kyiv. 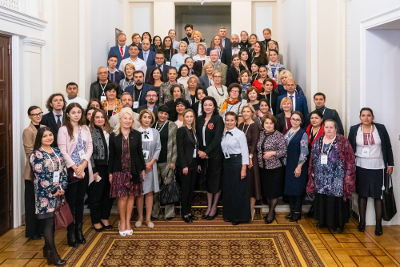 The participants of the international conference. Photo: UN Women/Volodymyr Shuvayev

The international conference brought together over 100 participants - high-level representatives of the Ukrainian legislative, executive and judiciary branches, oblasts and local administrations, members of the EU Parliament and the UN treaty bodies, Roma civil society organizations from Europe and Ukraine, as well as grassroots Roma women from across Ukraine - to provide practical recommendations for elimination of discrimination against Roma women in Ukraine.

The estimated 100,000 – 200,000 Roma women living in Ukraine are the most socially excluded and marginalized group. They suffer from triple discrimination: as Roma, as women and as persons belonging to a socially disadvantaged group. They experience greater risks of poverty than men of their community and women from the ethnic majority.

International and national human rights organizations in Ukraine express concerns over the obstacles that Roma women face in obtaining civil registration documents (such as passports and birth certificates), lack of which negatively affects their rights to education, limits their access to health care and other social services, hinders public and political participation, as well as undermines their protection and security. 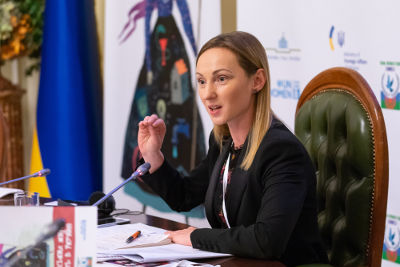 “The treatment of Roma is a test to Ukraine as a civilized nation. Instead of raising the walls between the communities of different ethnicities we should be building bridges. We must understand each other, only then we can cooperate to work together instead of promoting mutually destructive stereotypes”- Member of Parliament Iryna Suslova opened the two-day conference.

“In our work with Roma activists in Ukraine, we sometimes feel their fear they cannot have an impact. Roma rights activists should not feel isolated. A great number of experts and activists from the around the world, as well as from Ukraine, are present in the Parliament today, to support Roma activists and to build a network which can be empowering, and strengthen our joint advocacy efforts” – Anastasia Divinskaya, Representative of UN Women Ukraine.

During the conference, discussions focused on the international standards and norms, national legislation and the good practices from Ukraine and the European countries that advance gender equality, non-discrimination and protection of Roma with a specific focus on social and political rights, as well as the gender aspects of protection and security of Roma communities. 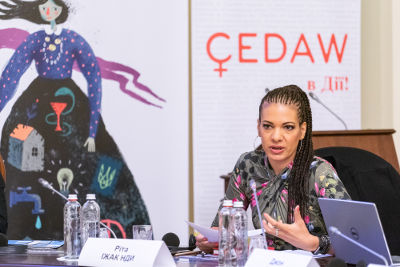 Rita Izsák-Ndiaye, Member of the United Nations Committee on the Elimination of Racial Discrimination (CERD) discusses her different experiences as a Roma woman, a former representative of the government of Hungary and a UN expert. Photo: UN Women/Volodymyr Shuvayev

As Representative of the UN Committee on the Elimination of Racial Discrimination (CERD) Rita Izsák-Ndiaye explained, “governments often speak about the issues from the point of you of majority – social inclusion, poverty, employment. But Roma face additional issues as a minority. It entails a number of other rights like preserving the culture and language pertained to a national identity. We should feel protected. It is a dignity issue.”

The gender–specific recommendations to national, regional and local authorities, which were proposed by the participants of the conference aim to address the pressing needs of Roma women and to ensure their equal rights and opportunities. They should inform the new approach of the current and future legislation or policies that promote rights of Roma.

John Packer, the Associate Professor of Law and Director of the Human Rights Research and Education Centre at the University of Ottawa, who has worked with the Ukrainian Constitution recommended that “the focus on formalities over the substantial implementation of the laws is dangerous. Denying access to health care to pregnant Roma women because they don’t have documentation is placing formality over substantive application of the law. I would invite government of Ukraine to revise such preoccupation to fulfill the human rights of everyone in this country.” 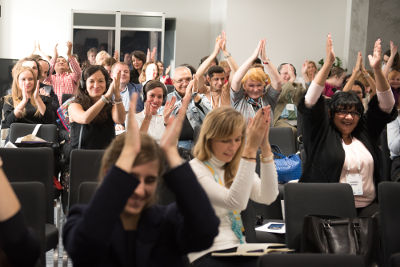 Participants of the conference conclude the discussion of the gender–specific recommendations they developed to address the pressing needs of Roma women in Ukraine. Photo: UN Women/Roman Shalamov

Recommendations like this refer to the interconnectedness of the rights and needs of Roma women in Ukraine. It starts with the fact that many Roma do not have registration documents - in some areas of Ukraine only 15 per cent of Roma have passports. Without the proper identification Roma women who give birth cannot receive official birth certificates for their children. Later in life, lack of civil registration documents prevents these children from acquiring education, accessing health care and gaining official employment.

Roma women are more vulnerable to poverty and social exclusion than Roma men or the majority population of women in Ukraine. Traditional Roma families give preference in education to boys while grooming girls for marriage. Lacking in education and facing cultural barriers few Roma women take leadership roles at any level of the decision-making. As a result, only two Roma women are representing the voices of their group at the level of national government.

Poverty and stigma are the biggest factors that prevent Roma women from accessing quality health care and social services. Roma women report facing disparaging remarks and degrading treatment from the medical staff. In one such example, Roma women were placed in a segregated hospital room with unsanitary conditions and were denied requests to be moved.

The international conference was organized by UN Women Ukraine with a financial contribution of Global Affairs Canada.

Related News
25/06/2020
In the words of Olena Hryhoriak: “The issues of violence and discrimination should not be silenced”
16/03/2020
International Women's Day around Europe and Central Asia
12/09/2019
LBTIQ women in Ukraine put discrimination in the limelight
16/08/2019
Odesa International Film Festival joins global HeForShe movement
03/07/2019
Hey guys: Gender equality is not so complicated – and it’s good for you!
END_OF_DOCUMENT_TOKEN_TO_BE_REPLACED