Hey guys: Gender equality is not so complicated – and it’s good for you! 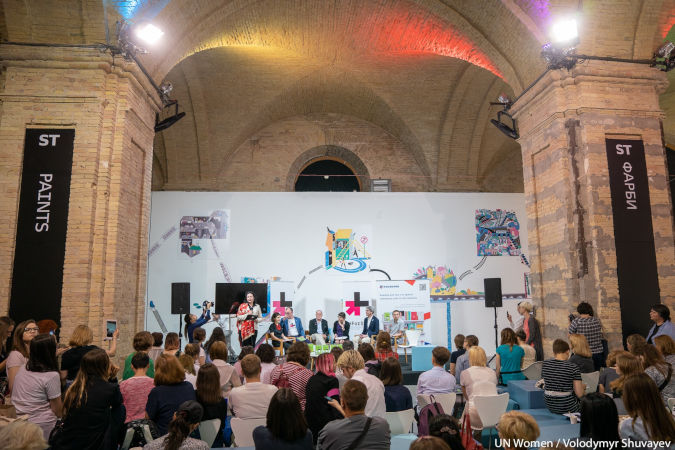 "Guy’s Guide to Feminism" by Michael Kaufman and Michael Kimmel is presented at the The International Book Arsenal Festival. Photo: UN Women/Volodymyr Shuvayev

On 23 May 2019, gender equality advocates Michael Kaufman and Michael Kimmel launched the Ukrainian language edition of their book, The Guy's Guide to Feminism, at the International Book Arsenal Festival in Kyiv, Ukraine. Produced in support of HeForShe, a UN-initiated solidarity movement for gender equality, by UN Women Ukraine in partnership with Ukrainian publisher Knygolav, The Guy's Guide to Feminism says men must be educated about feminism before they can understand its importance and benefits for men.

In a panel discussion moderated by gender equality expert Tamara Martsenyuk, Kimmel and Kaufman joined HeForShe advocate Roman Vintoniv, Council of Europe (CoE) Representative Dmytro Kuleba and Mykola Yabchenko, Ukrainian Women's Fund to discuss why gender equality is good for everyone – men included – and how to popularize it.

“Our book says to men, ‘This is not so complicated. You don’t need to read French feminist theory to understand feminism. It`s very simple.’ We tried to be humorous, because it’s really not that complicated. With our book we want men to enter this conversation, because as long as men are outside the conversation, they can`t develop it or themselves,” explained co-author Michael Kimmel. 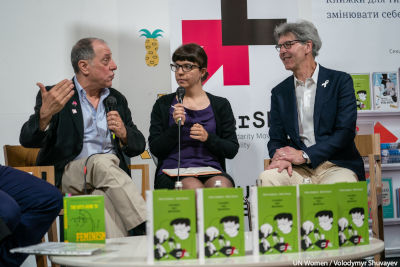 Gender discrimination and gender-based violence are widespread in Ukraine. Gender norms are narrowly defined with traditional, patriarchal views and values reinforced by media and school curriculums, and 90 % of cases of violence are against women. Political instability and conflict continue to have a significant negative impact on women and gender equality.

Both Government and development partners persistently underinvest in gender equality or programs that target women’s role in the governance, economy or in peace and security.

On 24 May, Kaufman and Kimmel discussed with students the critical role men’s studies play in gender and what being a public feminist activist means at the UN Women Ukraine-organized “Why men support feminism: discussion about men's studies and men's movement,” at the University of Kyiv-Mohyla Academy, Kyiv.

“HeForShe simply says, ‘We can’t fully empower women and girls unless we engage men and boys. We know this, because there’s never been an issue important to women that didn`t need men’s support,” said co-author Michael Kaufman.

That day, Kaufman and Kimmel met with Ukrainian media at a closed press-brunch to answer the question, What is feminism in 21st century?

To learn more about UN Women Ukraine and our programmes, click here.

Related News
16/08/2019
Odesa International Film Festival joins global HeForShe movement
15/03/2019
UN Women spotlights the contribution of women artists to the culture of Ukraine
18/10/2018
UN Women calls for the realization of the human rights of Roma women in Ukraine
08/02/2022
In the words of Marharyta Meleshkova: “We can reach any height. The main thing is to overcome the stereotypical barriers that exist only in our heads”
03/12/2021
In the words of Valentyna Dobrydina: “I promised myself that I would defend the rights of people with disabilities”
END_OF_DOCUMENT_TOKEN_TO_BE_REPLACED