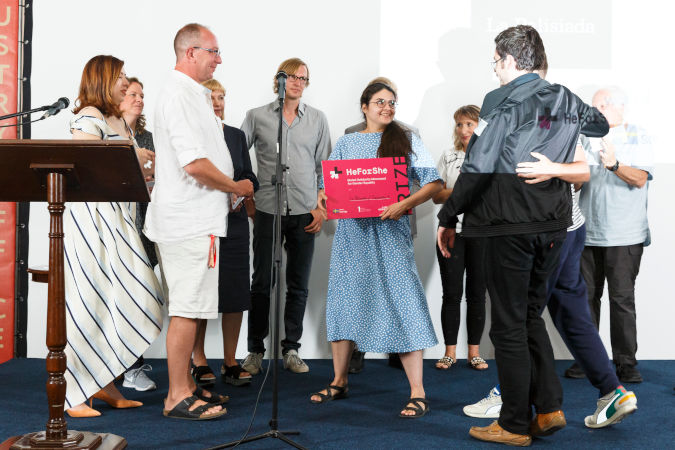 "The Odesa International Film Festival has raised gender balance issues in its programming and events for years. However, gender imbalances and discrimination against women persist in our industry. As an international festival we cannot ignore these problems and are happy to join HeForShe, the international movement to achieve gender equality and women's rights," said Yulia Sinkevich, general producer of OIFF.

“We are here to advocate for creating equal opportunities for women and men in the film industry. It is important that we support both gender equality and the creation of interesting and wonderful cinematic art,” said Martin Hagström, the Ambassador of Sweden to Ukraine.

The special HeForShe prizes were awarded to La Palisiada and September 1, film projects made by male directors and female producers. 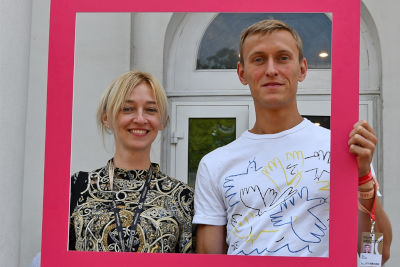 Guests of the special screening of the film The Vice of Hope at Rodina cinema in Odesa. Photo: UN Women/Anastasia Tiurmenko

“This is a very touching award for me, because it's not easy to be a female producer in this male dominated industry. It is very important for us to get support,” said Olena Yershova, producer of the film September 1.

In addition, the OIFF in collaboration with UN Women Ukraine, held Women on the screen and beyond, a panel on gender equality. Moderated by TV anchor and HeForShe advocate in Ukraine Yaroslava Kravchenko, the panel included Iranian filmmaker Mania Akabari, Arthouse Traffic film company CEO, Denys Ivanov, and Voldymyr Voytenko, film critic and chairman of the Ukrainian Film Academy.

“Art has always been and will be subjective, but it still perpetuates stereotypes of “male” and “female” cinema. In my career, I’ve seen a lot of films but have yet to find a clear difference between films made by men and those made by women,” said Volodymyr Voitenko.

“It is important to advance gender equality both through development work and by using movies and the film industry to raise this issue. It’s critical to push for this, as we’ve seen in films produced by men and women directors that bring to the surface hard stories on gender inequality,” said panel participant Dominika Stojanoska, UN Women Ukraine project manager.

Related News
03/07/2019
Hey guys: Gender equality is not so complicated – and it’s good for you!
15/03/2019
UN Women spotlights the contribution of women artists to the culture of Ukraine
18/10/2018
UN Women calls for the realization of the human rights of Roma women in Ukraine
08/02/2022
In the words of Marharyta Meleshkova: “We can reach any height. The main thing is to overcome the stereotypical barriers that exist only in our heads”
03/12/2021
In the words of Valentyna Dobrydina: “I promised myself that I would defend the rights of people with disabilities”
END_OF_DOCUMENT_TOKEN_TO_BE_REPLACED