Kalina Maleska is a writer from North Macedonia who contributed to the Awake Not Sleeping: Reimagining fairy tales for a new generation initiative. Her works include three collections of short stories, two novels, a play, a children’s book, and a study of contemporary literature. Her stories, as well as articles on literary theory and criticism, have been published in various journals and anthologies in North Macedonia and abroad. Her story ‘A Different Kind of Weapon’ is part of the anthology Best European Fiction 2018. Maleska teaches English and American literature at Ss. Cyril and Methodius University – Skopje. 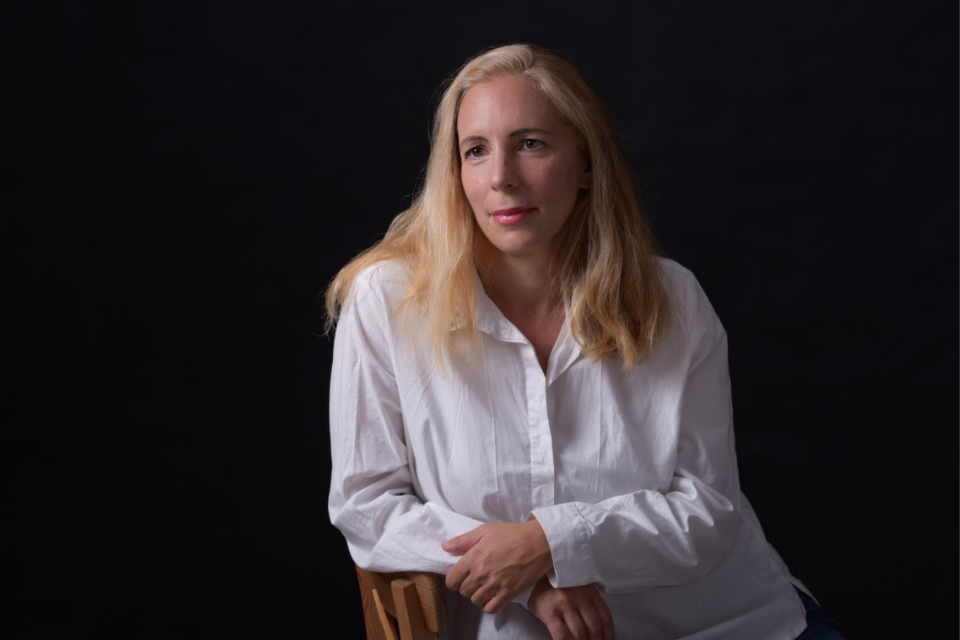 Kalina Maleska is a writer from North Macedonia contributing to the Awake Not Sleeping: Fairy tales for a new generation initiative.

What excited you most about this initiative?

When I was a child, at home we had six volumes of folk and fairy tales. I was so impressed by those stories, and I always imagined what I would have done differently if I had been a character in the stories. The Awake Not Sleeping initiative was very appealing to me as a writer because it encouraged the reimagining of these stories, some of which shaped my personality, my reading habits, and my dedication to literature.

I went back to the six volumes that I had not opened for over 25 years. I discovered they were full of stereotypes, gender bias, exploitation, rigid hierarchical structures, manipulation presented under the guise of wisdom, narrative logic that invites readers to justify or even praise abusive tyrants – things that children may not always notice so easily. Therefore, working on this project was an excellent opportunity to analyse, undermine and subvert the oppressive systems that are often uncritically presented in tales.

What is the power of storytelling and language in shaping children's world views?

The power of storytelling is not always direct and immediately visible, and it does not affect people in the same way. It certainly does not have the same power or effect as political, legal, or economic decisions, but in the long term it is very influential since it reflects and potentially transforms value systems on which societies are based. It is especially important for children as their worldviews are shaped, among other things, by the stories they read and hear. When they identify with some characters or refuse to identify with others, when they consider the challenges the characters face, then their awareness of other people is developed, and of how other people can be different from them and from each other. This encourages acceptance and empathy, as well as the realization and sensitivity about the fact that there are many ways to live, not just one norm to be followed.

What inspired you to reimagine your story?

‘The Child without Golden Hair’ is based on several fairy tales with similar motives, in which queens give birth to children with golden hair and sometimes golden stars on their foreheads. These children are stolen by a jealous cook (or another woman working in the castle) and sent in a basket down the river. Many of the plot developments and relationships between the characters seemed problematic to me, so I was inspired to make them visible in my story. My story, therefore, is not based on changing the events of the existing fairy tales (they mostly remain the same), but on foregrounding the prejudices and abuse of power in them by changing the perspective.

There are many aspects in the story that I aimed to subvert, but perhaps the most important one was the fact that the [original] story seems to justify the king for bricking up his wife and ordering everyone to spit on her. The justification in the fairy tale is based on the claim that the king did not know that the cook replaced his child. This implies that in case the queen indeed gave birth to a child who does not have golden hair, the king would legitimately have the right to brick her up. The king in the fairy tale is not presented as an unjust tyrant, but simply as a person deceived by the jealous cook, and when he realizes his mistake, he releases his wife – so the readers are expected to see him in a positive light. That focuses the readers’ attention on waiting for the truth to be discovered and the queen to be saved. Instead, I wanted to draw attention to the fact that the king uses his power and privilege to spread injustice.

What does gender equality mean to you? What does it look like to you?

It is a complex issue, which, among other things, includes laws that ensure equality, but legal regulation alone is insufficient to ensure actual equality in practice. Therefore, social norms and ethical systems are also supposed to change to improve the situation with gender equality. No matter what is achieved in this area, undoubtedly it can always be better, so there is never going to be, and there should not be, an end to the efforts for achieving human rights.

What kind of change would you like to bring about through your stories?

I would like to see readers thinking actively about the stories they read, and the values that these stories represent. I therefore use narrative techniques, such as the introduction of conflicting viewpoints, foregrounding aspects that stray away from traditional social norms, or discussing painful topics, such as loss or grief. Rather than focusing on a specific targeted change, I aim to emphasize mostly the process of change. I also focus on the importance of always rethinking existing values as well as emerging ones. In my experience both as a parent and as a teacher, I have noticed that talking about stories and asking questions about issues that are subtle greatly helps to encourage active and critical attitudes not only towards the stories, but towards the world as well.

Related News
18/06/2021
In the words of Esther Obi: “I want my children to not even know what racism is”
15/03/2022
The Mountain Climber
02/12/2021
I am Generation Equality: Amiran Karatsev, advocate for women’s rights and feminism
04/11/2021
I am Generation Equality: Gresa Hasa, feminist activist
11/08/2021
Giving young people the tools to overcome stereotypes
END_OF_DOCUMENT_TOKEN_TO_BE_REPLACED