This is what leadership looks like: Meet Edi Gusia, Chief Executive of Kosovo’s Agency for Gender Equality 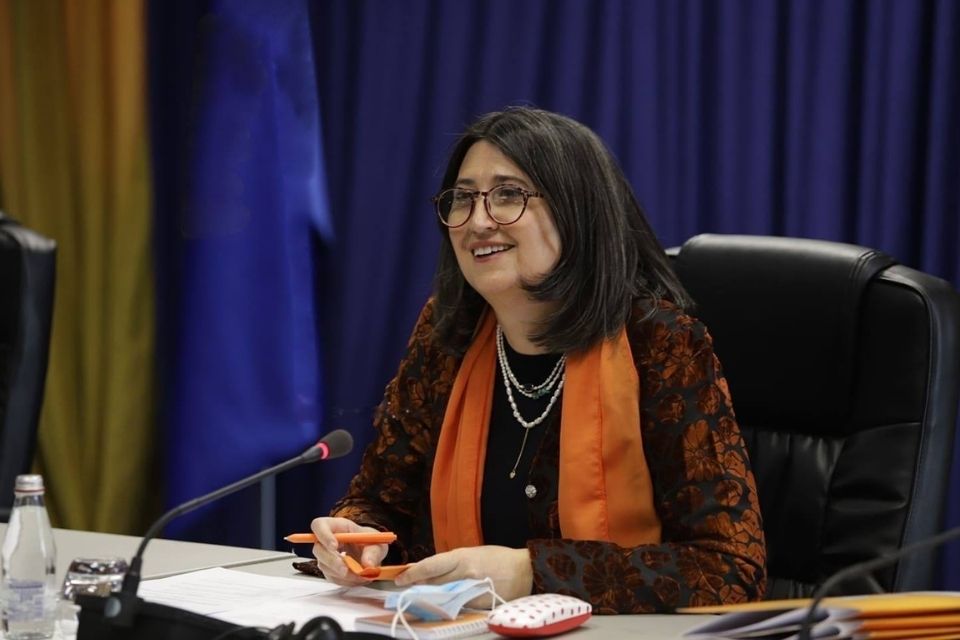 Edi Gusia is the Chief Executive of the Agency for Gender Equality. She participated in an event during the 16 Days of Activism against Gender-Based Violence campaign. Photo: Telegrafi

The COVID-19 pandemic has brought to light the daily struggles women face in Kosovo[1]. In responding to the pandemic, the Agency for Gender Equality (AGE) has played a key role in ensuring that the needs of women and girls are met, and that no one is left behind. As its Chief Executive, Edi Gusia has prioritized financial support for women and protection against domestic violence.

“The COVID-19 pandemic once again reiterated the need to provide stable and accessible care services, which in addition to being affected by the situation, in the long run also affect the socioeconomic stability of the society,” says Gusia.

In her leadership role as Chief Executive of AGE, Gusia mobilized efforts to coordinate and respond to the increase in domestic violence through awareness-raising and to ensure that survivors received support and care. Supported by UN Women and UNFPA, AGE coordinated joint institutional efforts to establish provisional quarantine facilities before survivors are admitted to shelters, to protect survivors and shelter staff, and developed an emergency protocol. This provisional facility was also equipped with clothes, bed linen, and feminine hygiene packages provided by UN Women and UNFPA.

“[During the pandemic] the contribution of women was underestimated." 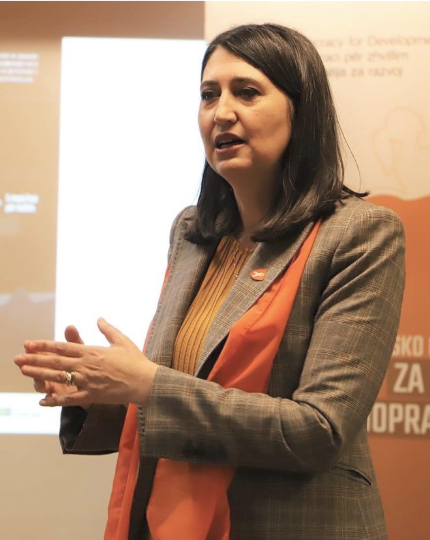 “The pandemic showed us how fragile we are, and above all how important it is to have well-defined protocols in response to domestic violence in an emergency,” says Gusia. In responding to the increase in domestic violence, AGE also focused on ensuring coordination with all actors in the response chain.

Gusia also understood the importance of mobilizing resources. As a result of constant advocacy by AGE, the Government of Kosovo allocated EUR 2 million to the Agency, to assist women businesses, SMEs and NGOs as well as 115 public and private kindergartens from all over Kosovo.

In addition to the support provided directly to the shelters, UN Women, through the Peacebuilding Fund, provided technical support to AGE to implement the targeted government assistance, by ensuring the development of the criteria for the proper allocation of funds according to the gender-related priorities of the 2020–2023 Government Programme for Kosovo – namely, the promotion of social equity, women’s socioeconomic empowerment, sustainable and inclusive growth, youth and women’s employment, early childhood education and quality education for girls and boys and youth from all communities.

"The pandemic showed us how fragile we are, and above all how important it is to have well-defined protocols in response to domestic violence in an emergency."

To assist civil society organizations, women’s organizations and women running small family businesses who were facing financial instability, AGE opened online applications for EUR 40,000 in subsidies, allocated from the EUR 2 million the agency received from the Government. They were awarded to six NGOs working in the field of gender equality and women’s economic empowerment, prevention of domestic violence, and seven women with initiatives aimed at empowerment and economic stability.

With the support of UN Women, AGE also launched the Gender Wage Gap in Kosovo report. “This report reiterated that women continue to remain hostage to family obligations, engaging in lower-paid professions, due to caregiving and life choices, to be more flexible to the needs of the family, and do not receive the proper appreciation or pay for this enormous contribution they make to the well-being of our society,” says Gusia.

An optimist, Gusia even sees a positive side of the pandemic: “The pandemic, with all its evils, managed to unite our local institutions and gender mechanisms with our international partners and civil society, to see how important partnership, coordination and above all the flexibility of development assistance is in responding to the needs of those who need it the most.”

“During the COVID-19 crisis, we have witnessed the critical role of women’s leadership in response, as well as for a more equitable recovery,” says Vlora Tuzi Nushi, UN Women Head of Office in Kosovo. “As UN Women, we are proud to be supporting and partnering with the Agency for Gender Equality, with the common aim to bring more effective, inclusive and fair policies, plans and budgets to address the pandemic and respond to the needs of women and girls.”

Related News
13/04/2022
In the words of Iliriana Jaka Gashi: “Bringing public and private institutions together to work on the economic reintegration of survivors of violence is indispensable”
26/02/2021
The European Commission and UN Women boost their partnership to address the rise in violence against women amid the pandemic in the Western Balkans
14/01/2021
As cases of the violence against women continue to rise, UN Women provides psychological support for survivors
25/08/2020
Ask a policewoman: What can police do to better protect women exposed to violence in an emergency context?
29/07/2020
Take Five: “The signing of this Memorandum seeks to create the best possible employment opportunities for survivors of domestic violence”
END_OF_DOCUMENT_TOKEN_TO_BE_REPLACED