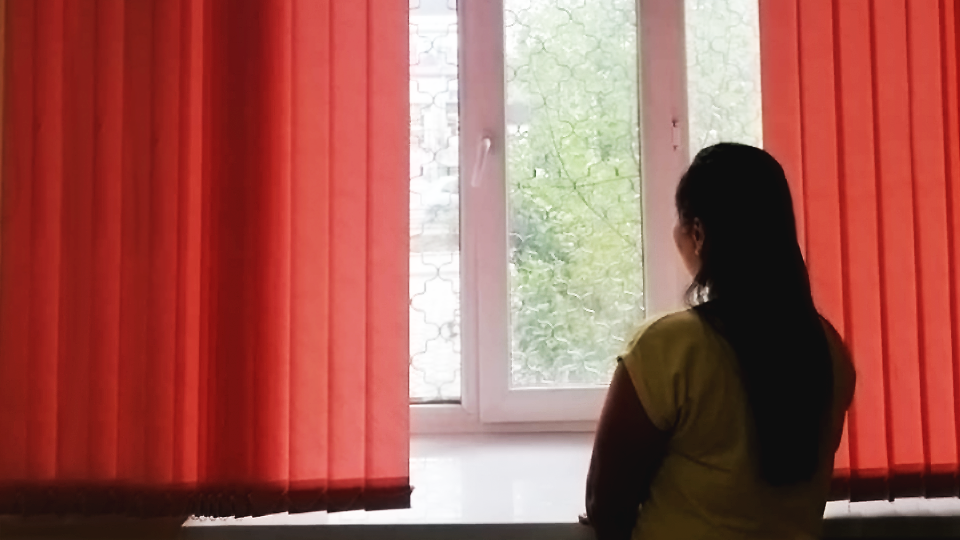 Nura Dzhumaeva* now lives in a shelter, and she is hopeful for the future. Photo: AFEW Kyrgyzstan

Aiperi Asanova*, 25, had been living with her abusive husband for six years prior to the pandemic, but during quarantine, the abuse escalated.

“[She] was being beaten both by her husband and her mother-in-law,” explains Nargiza Eshtaeva, a psychologist and UN Women gender expert who heads a crisis centre, Aruulan in Osh, in southern Kyrgyzstan. “The situation was so unbearable that I called the police myself and personally delivered the woman and her two infant children to a safe space.”

Asanova left, then eventually returned, after her husband and in-laws apologized – but the violence continues.

“In my 20-year experience helping victims of domestic violence, I can say that 98 per cent of women go back to their abusive husbands,” explains Eshtaeva. “There are many reasons behind it, and Aiperi is no exception. We cannot, and should never, judge these women. Each have their own reasons. All we can do is try to help.”

According to UN Women’s new Gender Rapid Assessment of COVID-19’s impact in Kyrgyzstan, 32 per cent of respondents (29 per cent of men and 34 per cent of women) have heard of an increase in domestic violence or experienced it themselves. The number is twice as high in urban over rural areas.

Based on data sources in Kyrgyzstan, the Assessment also reveals that from 25 March to 15 May 2020, 325 cases of domestic violence were reported in areas where the state of emergency was declared – a 65 per cent increase over the same period in 2019.

Yet official reports represent a fraction of all cases. Eshtaeva says she’s handled more than 350 domestic violence consultations alone since the quarantine began.

According to the Association of Crisis Centres, most cases remain unaddressed because: women refuse medical examination due to the fear of infection; they don’t report domestic violence to law enforcement agencies because they think the police won’t take protective measures and they’ll be left alone with their abusers for an indefinite period of time; due to self-isolation, women cannot go to their relatives and become economically dependent on their husbands; suspended police and court work means law enforcement cannot provide immediate legal support or go to a crime scene.

“The alarming fact is that one-third of respondents do not want to seek help in cases of domestic violence,” says Aisuluu Kamchybekova, UN Women Programme Coordinator. “Therefore, it is important to prioritize support services for violence survivors and ensure meaningful engagement of civil society in response planning and implementation, and humanitarian aid distribution, including women’s organizations and organizations supporting victims of gender-based violence.”

But service-providers, such as civil society organizations and crisis centres, are also experiencing hard times. Helpline workloads are growing, as is the length of consultations (some lasting from 30 minutes to four hours), while service-providers have limited capacity to help, due to quarantine restrictions.

According to report, 21.6 per cent of the respondents said COVID-19 has negatively affected their emotional and mental state. But the rate is much higher among women from vulnerable settings – with 96.6 per cent reporting they feel stressed, including 90.7 per cent of women living with HIV.

Among them is Nura Dzhumaeva* who lives with HIV. Before the quarantine, she was living with her abusive husband in the Jalal-Abad region of southern Kyrgyzstan. Having decided to finally leave him, she took their four children to the capital and moved in with her sister in a rented apartment. Hoping to start a new life, she planned to find a job. But the quarantine foiled her plans.

She received some food packages as humanitarian aid but was forced to send her children back home to her parents, as she couldn’t afford to feed them. Then, after an argument with her sister, Dzhumaeva had nowhere to live.

With the help of public AIDS Foundation East-West in the Kyrgyz Republic (AFEW), Dzhumaeva stayed in a shelter in Bishkek after the quarantine was lifted, determined to finish what she started. At one point, she considered returning to Jalal-Abad and to her husband, as she wasn’t able to achieve financial independence. But living in the safety of a shelter and having received psychological support, she decided to stay and landed her first job in the capital as a shop assistant.

Related News
19/05/2020
Social media broadcast draws attention to domestic violence amid COVID-19
19/06/2020
Press Release: Gender assessment in Kyrgyzstan reveals concerning results about the impact of COVID-19 on women
01/06/2020
Women confront pandemic-related violence against women across Europe and Central Asia
20/05/2020
From where I stand: “People weren’t prepared to stay home for so long and many are panicked, anxious and stressed”
07/05/2020
Safe spaces to protect women and girls from violence arranged as part of the EU-UN Spotlight Initiative in Kyrgyzstan
END_OF_DOCUMENT_TOKEN_TO_BE_REPLACED