Around 550 women survivors of domestic violence from Kosovo were admitted to shelters during the COVID-19 pandemic, with support from UN Women within the regional programme on ending violence against women in the Western Balkans and Turkey, “Implementing Norms, Changing Minds,” funded by the European Union. 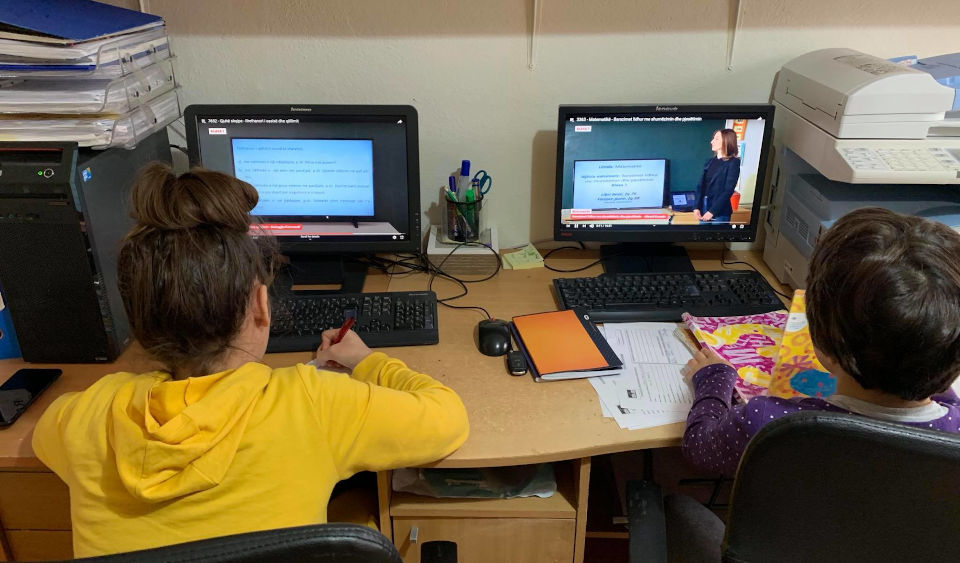 “I have experienced violence before, but it escalated during the pandemic. I was really afraid, so I sought help. The police brought me to the shelter,” said Zana Gashi*, a 46-year-old woman survivor of domestic violence, admitted to the Safe House in Gjakova, a city in western Kosovo*, during the COVID-19 pandemic. She escaped to the shelter with her three children, aged 16, 13 and 8.

Her children were the reason she chose to seek help. “For me this pandemic did not start in March, I was quarantined for almost my whole life. My children witnessed everything and encouraged me to contact the police and the shelter,” said Gashi.

Zana Gashi received psychosocial support at the shelter. “I don’t know how I would deal with this situation if I hadn’t received help in coping with anxiety, fear and stress,” she said. In the shelter survivors can practice fitness and yoga, while their children receive support with their homework. UN Women has equipped shelters in Kosovo with electronic equipment so that children can follow online education.

In Kosovo, the police have reported an increase in domestic violence cases in the first week of isolation measures. According to the study “Addressing COVID-19 from a Gender Perspective: Recommendations to the Government of Kosovo,” the circumstances surrounding the pandemic made it even harder for victims to report the crime, as they were locked down with their abusers. Even before the pandemic, the stigma surrounding domestic violence contributed to the underreporting of cases.

“Isolation and financial insecurity added power and control to the perpetrator, and they used violence as a solution,” said Sakibe Doli, director of the Safe House, one of the eight domestic violence shelters in Kosovo that has operated uninterruptedly to admit survivors while taking precautionary measures against COVID-19.

In the first week of isolation measures, UN Women received a list of essential needs from all Kosovo shelters. In coordination with other UN agencies, UN Women assisted in addressing the needs of shelters and women survivors and, within a short period, shelters were able to support up to 550 survivors.

“Institutions, the Kosovo Police, civil society and shelters did tireless work so that women survivors of domestic violence receive help. As UN Women, we are committed to assisting all actors engaged in the elimination of gender-based violence, especially during this delicate time,” expressed Vlora Nushi, UN Women Kosovo Head of Office.

The Security and Gender Group (SGG), a multi-stakeholder group chaired by UN Women, issued a joint statement in the first week of isolation measures calling on the prevention of domestic violence amid the COVID-19 outbreak.

“As the UN, we are particularly concerned by the gender dimension of this crisis. Global trends suggest unequivocal increase in domestic and gender-based violence, and girls and women in Kosovo are no exception. Specific actions are ensuring that shelters have the needed capacities to assist survivors; that actions are well coordinated between the civil society, women’s rights organizations and the international community; and that decision makers are aware of the problems women are facing,” stated Ulrika Richardson, United Nations Development Coordinator.

UN Women is also in the process of securing laptops and tablets so that children in the shelters can follow distance learning classes.

Nevenka Rikalo, from the Women’s Inclusive Center, a shelter operating in the Novobrdo municipality of Kosovo that admits cases from the Serbian community, emphasized: “We are expecting an increase of cases in our shelter, and we need to ensure that women have the information available on where they can report violence. The traumatic experience of survivors of violence will be heightened by fear and uncertainty.”

She expressed that restriction of movement posed a major challenge, as women survivors are afraid of seeking help. The Ministry of Health has taken this into account, announcing that survivors of domestic violence are exempt from the latest curfew measures.

When asked what her message for other survivors would be, Gashi stated: “Women need to find ways to report violence, even in times of the pandemic. Violence should not be tolerated. It hurts us and our children. The police brought me here, and I know that institutions are ready to help all others in similar situations.”

In April, UN Women started a major awareness raising campaign on domestic violence in Kosovo, which featured video messages of high-profile leaders, including the Prime Minister, receiving 1,000,000 views in the first week. The campaign aims to inform survivors of domestic violence that full-time assistance is available, as institutions, police, and women’s organizations are working to provide rapid response and safety.

Related News
26/02/2021
The European Commission and UN Women boost their partnership to address the rise in violence against women amid the pandemic in the Western Balkans
25/08/2020
Ask a policewoman: What can police do to better protect women exposed to violence in an emergency context?
29/07/2020
Take Five: “The signing of this Memorandum seeks to create the best possible employment opportunities for survivors of domestic violence”
08/06/2020
In the words of Stefan Petrovski: “We need to raise awareness and prevent violence against trans men and women”
01/06/2020
Women confront pandemic-related violence against women across Europe and Central Asia
END_OF_DOCUMENT_TOKEN_TO_BE_REPLACED