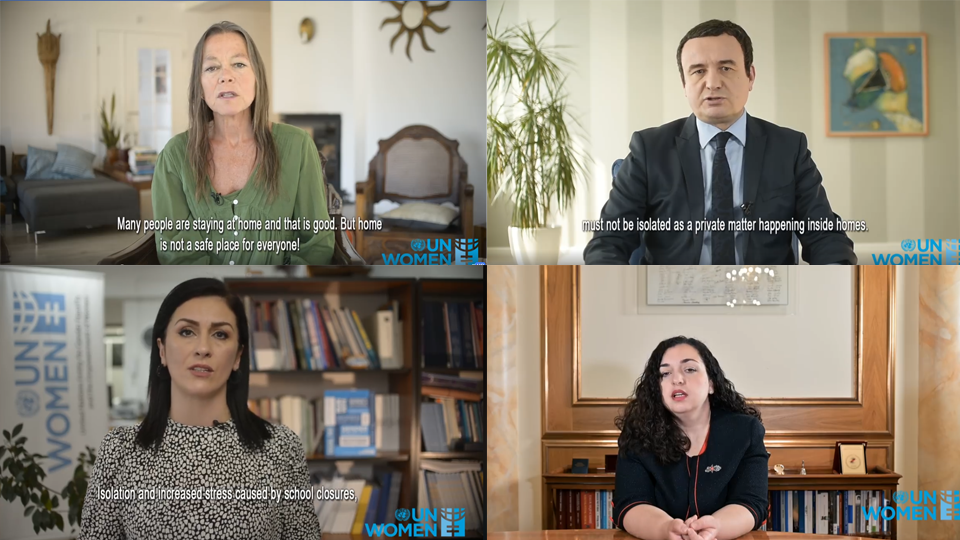 Although staying at home is an important protection against the spread of COVID-19, home is not always safe. Reports in Kosovo[1] indicate that domestic violence cases during the coronavirus pandemic are up 36 per cent from the same period last year.

To mitigate this, UN Women in Kosovo has begun “Report Violence, Save Lives!”, an awareness-raising campaign that empowers survivors to report domestic violence and which has led to a rapid response from leaders in government, police and women’s organisations to protect them.

Powered by a series of powerful videos from important influencers and leaders in government, “Report Violence, Save Lives!” has reached more than a million people in its first two weeks.

“Staying home saves us from the virus but violence must not be isolated as a private matter inside homes,” said Kosovo Prime Minister Albin Kurti, in his taped message. “It should be reported, and the responsible institutions should increase their response. Every case of violence is an emergency. The virus cannot delay for later the prevention and punishment of domestic violence.”

Assembly President Vjosa Osmani urged people to report violence. “Violence survives only when we are silent, therefore you should never isolate your voice during this period of isolation. Your voice can empower so many others in a similar same position,” she said.

Survivors of domestic violence can seek assistance during lockdown hours and are exempt from strict new Ministry of Health curfew measures and restrictions on movement.

Minister of Health Arben Vitia urged citizens to stay home and respect each other: “Recent statistics have shown that domestic violence has increased. This should not happen. Now more than ever we need to love and respect every citizen, and especially our family members.”

“Violence in the time of pandemic is a hidden pandemic, domestic violence is a criminal offense,” said Minister of Justice Albulena Haxhiu in her video message. “In these circumstances the heaviest burden falls on girls and women. Being isolated with an abuser is worse than imprisonment because abusers can take advantage of the situation to prevent partners from going out and asking for help.”

UN leaders in Kosovo echoed their government counterparts in their own Report Violence, Save Lives videos against domestic violence.

“The United Nations is working with local institutions and women’s organizations to ensure that we provide the best help possible to women and children and others in need. I call on everyone – institutions, NGOs, politicians – to do what is needed to ensure the protection of domestic violence survivors,” said Ulrika Richardson, United Nations Development Coordinator, in her message.

“We remain committed to ensure that survivors of domestic violence receive every assistance and support. Institutions, Kosovo Police, civil society, and shelters are doing tireless work so that survivors of domestic violence receive help. Violence is not a private matter: It is a crime and every citizen is responsible for reporting this crime,” said Vlora Nushi, UN Women Head of Office in Kosovo.

The first phase of the COVID-19 campaign against domestic violence reached 200,000 people in the first two days, and since then, the numbers have increased to more than 1 million individuals on social media. The next phase of the Report Violence, Save Lives campaign will feature mayors, and civil society organizations, including those from non-majority communities, and ambassadors.

[1] All references to Kosovo on this website should be understood to be in the context of United Nationsn Security Council Resolution 1244 (1999).

Related News
25/08/2020
Ask a policewoman: What can police do to better protect women exposed to violence in an emergency context?
29/07/2020
Take Five: “The signing of this Memorandum seeks to create the best possible employment opportunities for survivors of domestic violence”
01/06/2020
Women confront pandemic-related violence against women across Europe and Central Asia
20/05/2020
Women survivors of violence receive vital support from shelters in Kosovo during the pandemic
08/05/2020
Temporary shelters set up to quarantine safely domestic violence survivors in Kosovo
END_OF_DOCUMENT_TOKEN_TO_BE_REPLACED