Elena Georgievska: A mother determined that her son enjoys every opportunity in his education and life

Elena Georgievska, from Skopje, North Macedonia, is the mother of a child with autism. She is dedicated to fighting for her son in a society where children with disabilities face many obstacles. 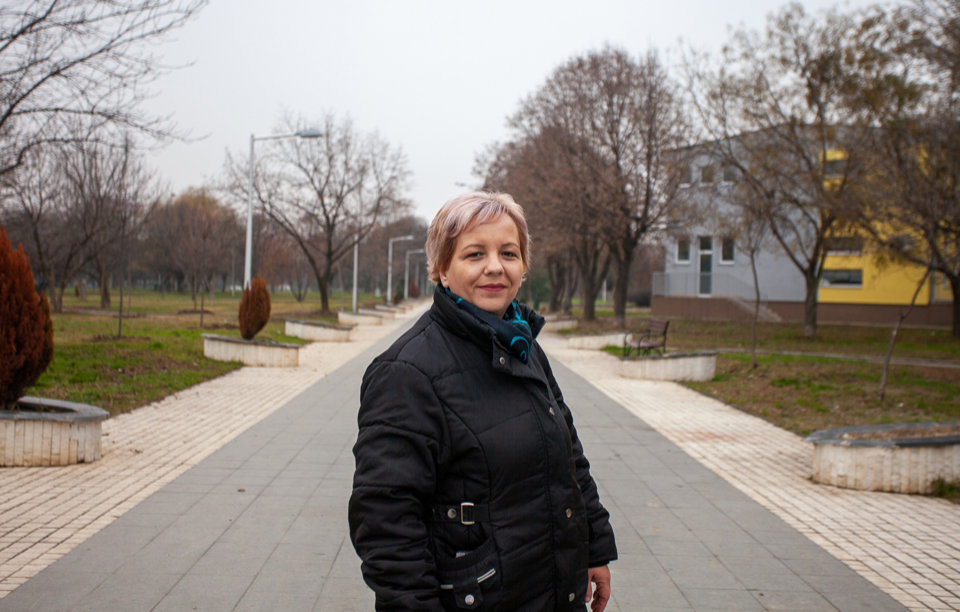 Elena Georgievska, from Skopje, North Macedonia, is the mother of a child with autism. Credit: UN Women/ Karina Ekizler-Kirillova

Elena's day starts at 5 am, getting her family ready for the day ahead. Her children, Jovan and Yana, attend elementary school in Aerodrom municipality in Skopje, the capital of North Macedonia. Jovan, her eldest son, studies in the ninth grade and Yana is in the fifth grade.

Jovan was diagnosed with autism many years ago. Most doctors suggested that he be sent to a specialized school. Even so, Elena insisted on sending him to a regular school. 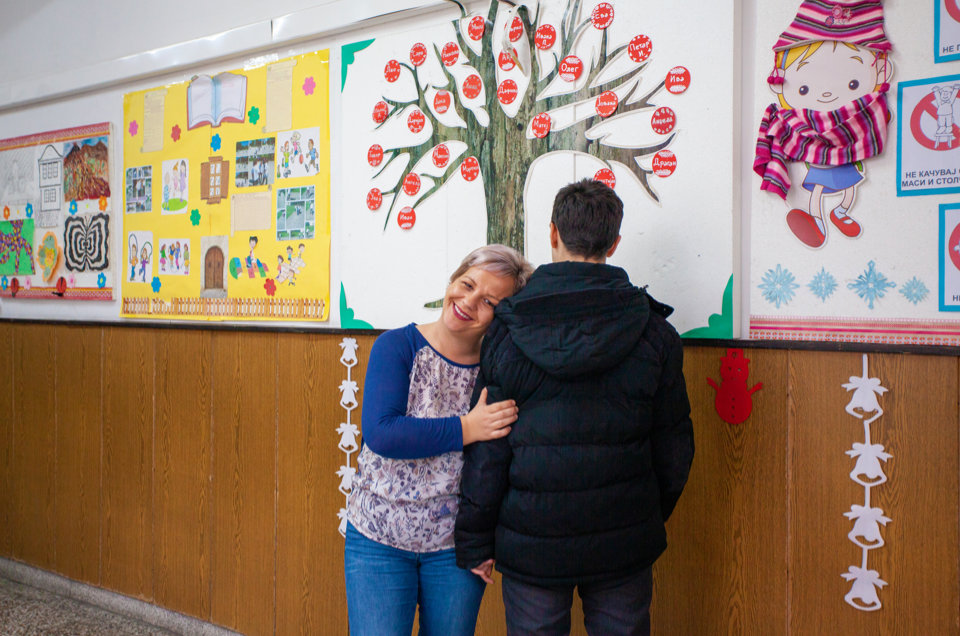 “Moreover, they made it clear that switching from specialized to regular school would be impossible afterwards, that there simply wasn’t any way back,” Elena recalls her most difficult days. “I told them to give him a chance and see the progress he makes.” Now she is happy with the decision that she made.

“And we did it. Jovan has made great progress at school. We undergo regular checks, and the doctors who were against it saw good results,” says Elena, adding: “The life of a child with ASD (Autism Spectrum Disorder) largely depends on the will and efforts of the parents. You need to show your teeth, fight doctors’ opinions. If they see some kind of resistance, they will give your child a chance. And, if you withdraw, it is much easier for them to send you to a special school straight away.”

What it takes for the father

Elena’s most difficult time was when she first learned about the diagnosis, and she had to change jobs. “I set a goal - to set the right direction for the development of my child. It has become the purpose of my life. And I have enough determination and persistence,” she says.

I have a goal - to set the right direction for the development of my child. It has become the purpose of my life. And I have enough determination and persistence.”

At first, Elena’s husband didn’t want to hear anything about ASD. “My husband withdrew, because it was a bit hard for him to accept that we actually had a problem. I fight more than my husband,” Elena admits. Her husband came into terms with Jovan’s condition when they applied for an assistant for him. He was happy to find out that Jovan had a milder condition than many other kids with autism.

Elena’s youngest daughter, Yana, on the other hand, is very supportive of Jovan. She encourages parents of children with disabilities in their neighborhood to send their kids to regular schools or to seek opportunities for additional assistance so they can achieve better results.

An assistant who expanded Jovan’s world

Elena’s life took a positive turn when the municipality of Aerodrom decided to allocate funds for personal assistants to support children with disabilities. Elena’s son Jovan was able to receive assistance through this scheme.

The municipality of Aerodrom is one of 21 municipalities supported through the project “Promoting Gender Responsive Policies and Budgets: Towards Transparent, Inclusive and Accountable Governance in the Republic of North Macedonia”, which supports municipalities to ensure gender-responsive and targeted investments. For more than two years, the municipality of Aerodrom has been allocating funds for personal assistants for children with disabilities. The project is funded by the Swiss Agency for Development and Cooperation and the Swedish International Development Cooperation Agency – Sida.

Now, Jovan is supported by a personal assistant during all his classes. She helps him be more active in the classroom. He can write with her help, answer questions, engage in projects, and many other positive changes have occurred.

“Jovan finishes his homework on time. He became more active and participates in projects with other children. In addition, the personal assistant maintains the communication between teachers and parents. The assistant writes everything down for him – that he has homework, parents’ meeting, medical check-up, some organized activity out of school,” Elena explains.

Friends from the first grade

Elena’s son is very well accepted in his class. They’ve been together since the first grade and he has very strong support.

“Jovan is afraid to go down the stairs. And always, one or two children stay with him and wait for him. They would not go anywhere without him,” Elena explains with a smile. She admits that at the beginning, when Jovan started the first grade, it was very difficult to explain to mothers and then to children what ASD is. At first, Jovan was afraid to speak, afraid to say something wrong, and that his classmates would make fun of him. But gradually he began to feel more confident.

“For me it was most important that the children accept him for who he is, and then the teachers and the rest of society,” Elena explains.

If you ask him, Jovan says he doesn’t like school very much, but he likes his friends a lot! He also likes fine arts, especially drawing. “Until last year, he had a teacher who used to ‘buy’ his paintings, he would give him some small amount, like 5 denars (1 cent),” Elena recalls with warmth.

There are many people like Elena. According to the World Health Organization, worldwide, one in every 160 children suffers from ASD. Elena participates in a Facebook community for mothers of children with disabilities, where they share experiences, seek help, and enquire about activities. 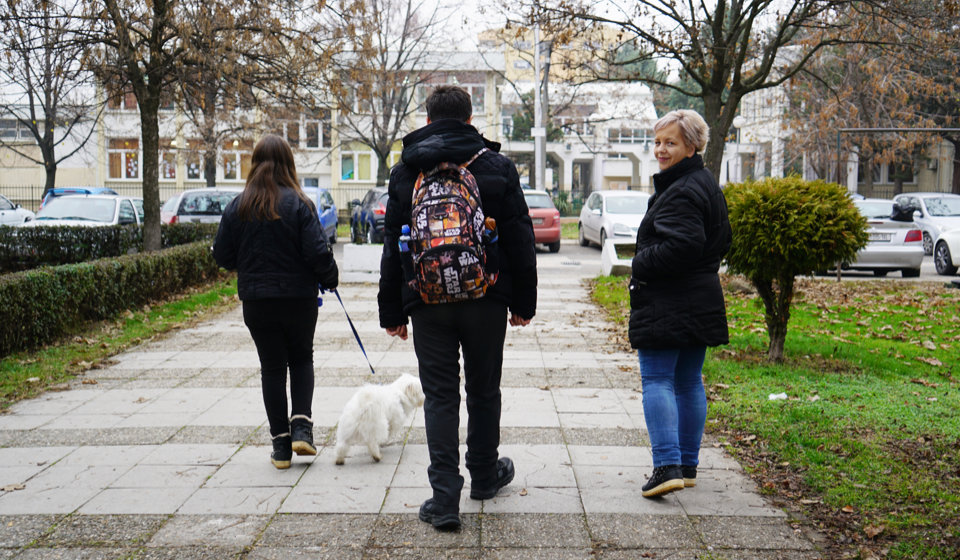 Elena Georgievska walks her children to their school in the municipality of Aerodrom in Skopje. Credit: UN Women/ Daria Komleva

“There was a post on Facebook not long ago by a parent of a child saying that God knows where to send such children. He sends them to strong and resilient parents, who can endure and fight. So, I say ‘Thank you God’,” Elena smiles.

Although most of her time is devoted to Jovan’s needs, Elena still manages to have time for herself. “Even if it is not much, I find time to see my relatives or go out for a coffee with friends, to exchange opinions and talk.”

Two months ago, Jovan took part in a school concert. His music teacher came up with an idea for how Jovan could participate. She asked him which song was his favourite. “He opened the show performing ‘We Will Rock You’, one of his favourite songs, and it was something unbelievable! The audience, everyone rose to their feet in applause, they could not believe that Jovan could do that,” Elena says with a proud smile and adds, “At the end of the concert, the audience called Jovan on stage again! I was the happiest mum.” 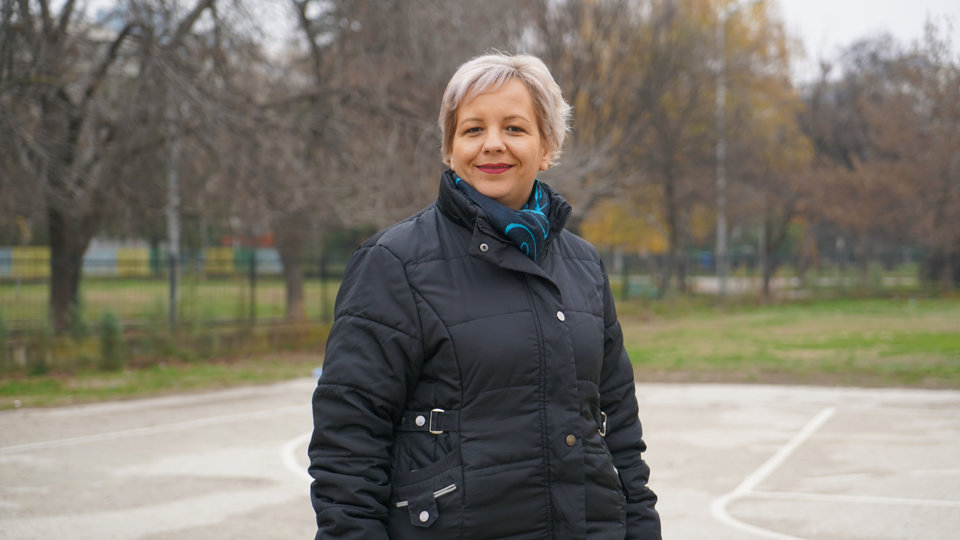 Elena admits that her life is an endless struggle for the rights of children with disabilities to education, healthcare and an equal life. Credit: UN Women/ Daria Komleva

Elena is proud of the success she has achieved so far with Jovan. Her strength and devotion helped him to find friends and his special way in life. She wants to ensure that Jovan completes secondary education. “I want to give him a guidance, a direction in life, so that he would be able to earn a living in the future.”

I want to give him a guidance, a direction in life, so that he would be able to earn a living in the future.”

“And that means you need to continue to fight and never give up. I will knock on every door, I will fight!” Elena smiles.

I will knock on every door,
I will fight!” 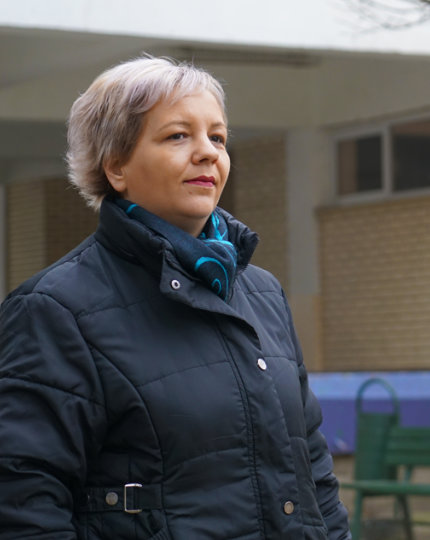 Related News
10/12/2020
Ana Šaćipović: Building a bridge between two worlds
09/10/2020
Adalet Budak Akbaş: Changing the rules so that women and girls in Turkey can thrive with an education
07/04/2020
Aida Loshaj: A medical researcher from Kosovo hoping to discover cure for an evasive autoimmune disease
06/04/2020
Bahar Toksoy Guidetti: From a successful career in Turkish volleyball to empowering girls through sport
16/03/2020
Veronica Fonova: Becoming a feminist and leading Kazakhstan’s first feminist rally
END_OF_DOCUMENT_TOKEN_TO_BE_REPLACED