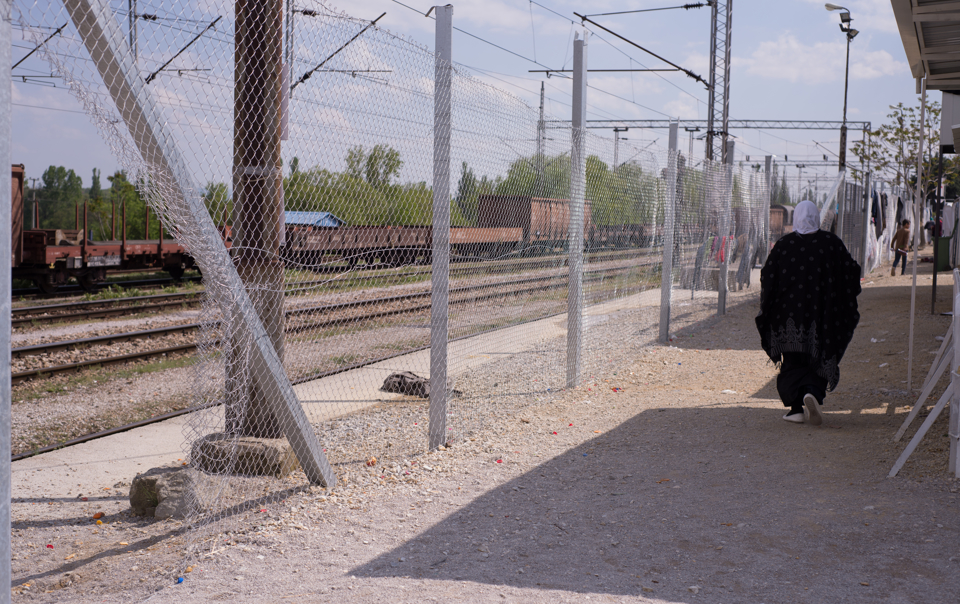 Woman walking at the refugee reception centre Tabanovce, Macedonian-Serbian border, 26 April 2016. The fence of the centre has been broken. Photo: Mirjana Nedeva

On the occasion of International Migrants Day, 18 December, more than 80 women activists and representatives of line ministries, civil society and academia from the Western Balkans and Turkey came together to discuss ways to prevent and respond to violence against women migrants at the webinar “Intersectional solutions to eliminate violence against migrant women and girls.”

Despite the ratification of the Council of Europe Convention on preventing and combating violence against women and domestic violence, also known as the Istanbul Convention, in the Western Balkans and Turkey (except Kosovo*), migrant women in this region are exposed to a higher level of discrimination and violence, particularly those fleeing war zones. Findings show that 67 per cent of migrant women who reached Serbia through the “Balkans route” experienced some form of physical/sexual violence perpetrated by male relatives, law-enforcement officers and/or smugglers.[1]

In this context, Prof. Dalia Leinarte, member of the UN Committee on the Elimination of Discrimination against Women (CEDAW), introduced the newly adopted general recommendation of CEDAW against trafficking of women and girls in the context of global migration. “The general recommendation stresses that the inequalities that women face worldwide make them particularly vulnerable to trafficking and put an emphasis on gender aspect of human trafficking and the need to address the demand that fosters trafficking of women and girls,” said the CEDAW member.

While the Western Balkans mostly serves as a transit region for migrants hoping to reach the European Union, some countries in the region have seen an unprecedented number of migrants arriving, notably in Serbia, posing new challenges.

“The rights of migrant women are not a single-issue struggle. It is the same struggle for all the women from different vulnerable groups – Roma women, women with disabilities and others,” said Jelena Hrnjak, programme manager of “Atina,” an NGO implementing a project aimed at women and girl refugees and asylum seekers and, among them, victims of trafficking and sexual exploitation in Serbia.

Despite the challenges, Hrnjak highlighted some promising practices in Serbia. “Our law on asylum was reviewed two years ago and, thanks to it, migrant women and girls who are victims of violence or human trafficking have been granted asylum in Serbia. However, more remains to be done. The COVID-19 crisis has also shown us that institutional responses are not enough, and that non-governmental organization support is imperative to hold the pressure.”

According to Hrnjak, 25 per cent of migrant women are coming from Syria, while the majority come from Afghanistan, Pakistan, Bangladesh and African countries. Currently, Serbia has 6000 refugees in asylum centers and almost the same number outside of the centers.

Migrant women and girls’ limited access to adequate general and specialist services prevents them from exiting the cycle of violence and contributes to a low reporting rate of violence. Linguistic and cultural barriers, as well as the concentration of services in town centres, are also significant barriers to reporting violence, especially sexual violence.

Good practices in this aspect, particularly on providing legal aid to refugee and asylum seekers, was shared by Maja Atanasova, project manager from the Macedonian Young Lawyers Association. “Migrant women and men have different needs, so we need to have a gender sensitive approach to our work in order to provide the right service,” said Atanasova. “Now we have at least one lawyer specialized in gender-based violence cases.”

The COVID-19 pandemic has also posed challenges in reaching migrant women and girls. Hatem Efe Keller, programme manager at Turkish CSO Support to Life, talked about the practices that her organization used to support 70,000 women and 2,000 girls during the COVID-19 crisis. “We have increased our channels to refugees to access services and also launched a website in Turkish, Arabic and Kurdish that would include information for refugees and migrants. We also organized virtual awareness-raising sessions and provided cash assistance to women survivors of violence to respond to the most urgent needs,” she concluded.

Despite a lack of sex-disaggregated data on women migrants in the Western Balkans and Turkey and the prevalence of violence against women and girls among them, CEDAW and the Group of Experts on Action against Violence against Women and Domestic Violence (GREVIO) highlighted the heightened risk of violence and discrimination to which migrant women are exposed before, during, and after the migration process.

“One of the innovations of the Istanbul Convention was to include migrant women, asylum seekers and refugees in the non-discrimination clause of the convention,” stated Simona Lanzoni, second vice-president of GREVIO. “It applies entirely to all women irrespective of their migrant or refugee status. Asylum seekers and migrant women should receive the same protection, support and treatment as all women.”

In this regard, areas of recommendations raised by CEDAW and GREVIO include:

Organized by the European Union, the Council of Europe, and UN Women, this webinar was the third in the series "A thousand ways to solve our problems: Preventing and responding to violence against women from an intersectional perspective in the Western Balkans and Turkey," within the framework of the EU-UN Women programme “Ending violence against women in the Western Balkans and Turkey: Implementing Norms, Changing Minds.”