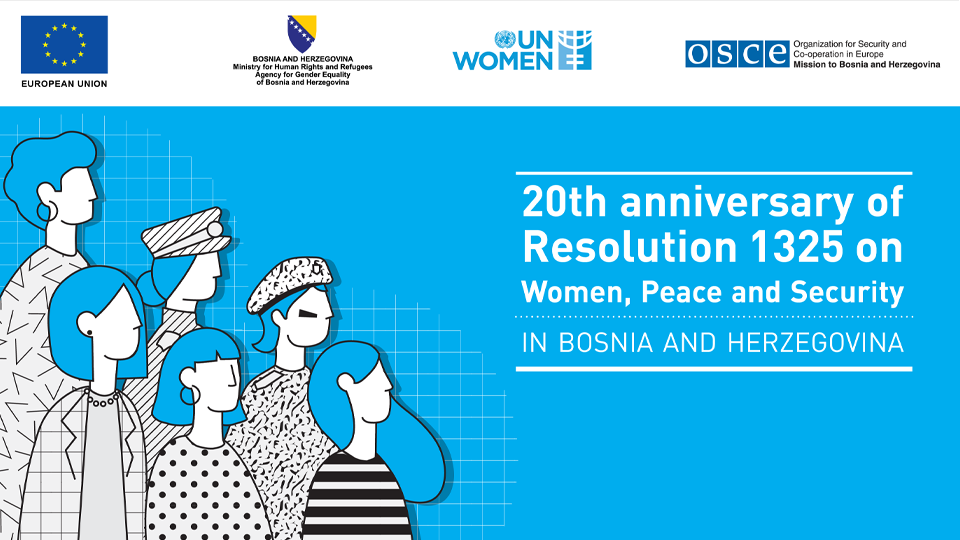 SARAJEVO, 6 November 2020 – The Agency for Gender Equality of Bosnia and Herzegovina (BiH) of the BiH Ministry of Human Rights and Refugees, the OSCE Mission to BiH, the Office of the European Union in BiH and the UN Women BiH marked the 20th anniversary of the adoption of UN Security Council Resolution 1325 on Women, Peace and Security by organizing an online conference today.

The conference provided key actors with an opportunity to take stock of the progress achieved and recommit to the accelerated implementation of the Resolution in the future, which is to further build and preserve peace and security in BiH.

“The UN Secretary-General recently presented the vision for Women, Peace and Security for the new decade, with clear future priorities - tangible results in women’s equal and meaningful participation in peacemaking, peacekeeping and peacebuilding; non-conditional defense of women’s rights and standing with Women Human Rights Defenders; and dedicated investment in gender equality in post-conflict recovery,” said Ingrid Macdonald, UN Resident Coordinator in BiH. “A critical aspect of realizing sustainable peace and development around the world, including in BiH, is the need to succeed in achieving gender equality. We face numerous challenges in BiH, but we are also presented with a once-in-a-generation opportunity: with women making up 51% of BiH’s population, they have a fundamental right to participate in decisions affecting their future. Women must not just be consulted: their voices must be reflected in emerging policies and political decisions. They should not simply be invited; they should be included; not just engaged but ensured a co-lead in the country’s political processes,” she continued.

Miloš Lučić, BiH Minister of Human Rights and Refugees, highlighted the importance of the Women, Peace and Security agenda in BiH stating: “UNSCR 1325 is a special resolution that, for the first time, highlights the special impact, needs, interests and contribution of women in and following armed conflicts. By adopting this resolution in 2000, the UN Security Council confirmed the changed nature of the contemporary armed conflicts, in which civilians are a more frequent target and women are still excluded from peace negotiations and decision-making in relation to the post-conflict society building. This resolution highlights that the efforts aimed towards peace, reconciliation and security are more sustainable when women are equal partners in prevention of violent conflicts, protection and provision of assistance, as well as in recovery from the conflict and building a permanent peace. Higher participation of women is not only about fulfilling their human rights, but it is also a key to sustainable development. Bosnia and Herzegovina already adopted its third Action Plan for the implementation of the UNSCR 1325 for the period 2018–2022, which demonstrates our commitment to its continuous and systemic implementation.”

“The European Union has a long practice of promoting gender equality, advocating for a society in which women and girls claim their rights and are active participants rather than bystanders in peace-building processes. Gender equality, as such, is an indispensable part of the European Union’s legal and political framework. However, global and local challenges remain. Ensuring that national budgets for the implementation for Women, Peace and Security National Action Plans are adequately funded and putting in place well-designed monitoring and accountability systems co-ordinating the activities of government bodies at all levels to a greater extent, remain priorities,” said Ekaterina Dorodnova, Deputy Head of the European Union Delegation to BiH.

Kathleen Kavalec, Head of the OSCE Mission to BiH stressed the importance of ensuring that COVID-19 related responses are reflecting principles set in UNSCR 1325: “Today we are celebrating the 20th Anniversary of the UNSCR 1325, yet we are faced with a new challenge. COVID-19 is a humanitarian crisis that has accelerated security threats across the globe whilst exposing deep societal inequalities. Women, among other groups, have been disproportionately affected in the wake of the fight against this virus. We have to fully understand and address the gendered aspects of the pandemic and apply a gender lens when analyzing interventions. The women, peace, and security framework should be fully integrated into our COVID-19 responses. Furthermore, women need to be involved in the highest levels of decision-making to ensure their needs are taken seriously.”

Organizers of the conference remain committed to promoting gender equality and women’s role in peace and security for all, in their daily activities and strategies.

Related News
16/11/2018
Press Release: Balkan women politicians urge for meaningful participation of women in peace and security
23/10/2018
From where I stand: “The adoption of the National Action Plan on UNSCR 1325 is only the beginning”
18/12/2017
Women leaders at the forefront of peace building in the Western Balkans
15/02/2016
Regional gathering helps foster women’s solidarity in their push for peace in Europe and Central Asia
26/05/2022
I am Generation Equality: Dilya Akhmetova, a UN peacekeeper from Kazakhstan
END_OF_DOCUMENT_TOKEN_TO_BE_REPLACED