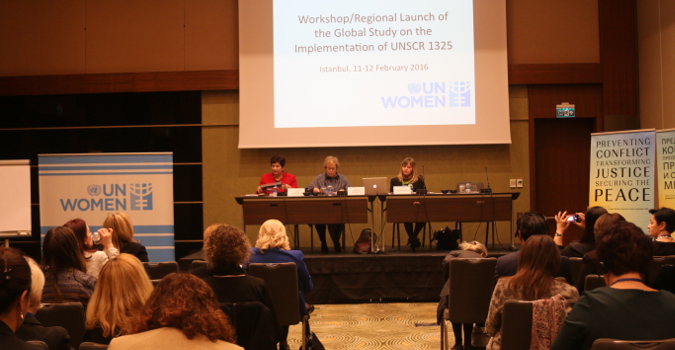 `Regional Launch of the Global Study on the Implementation of UNSCR 1325` was held in Istanbul on 11-12 February 2016. Photo: UN Women / Gizem Gurol Yarbil

More than 60 government, civil society and international institution representatives from Europe and Central Asia came together in Istanbul on 11-12 February to discuss how to increase women’s role in conflict prevention and resolution, peacebuilding, security sector reform, preventing violent extremism, and humanitarian response.

They agreed that too few women are taking part in peace negotiations and in the security sector, and for progress to be made, women can cooperate more cross regionally to replicate successes in breaking down barriers, and more measures are needed for more women to have leadership roles in political parties and in government.

This flagship event organized by UN Women Regional Office for Europe and Central Asia comes at the heels of the 15th anniversary of Security Council resolution 1325 (2000), a landmark document on the inextricable links between gender equality and international peace and security. 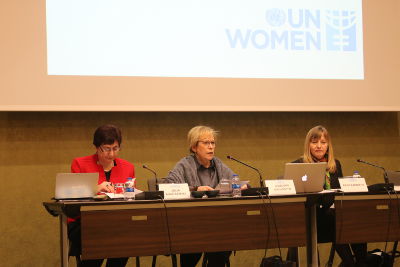 “Women are essential to peace. More women should be included in peace negotiations and measures to increase women’s political and economic empowerment should be part of the peace talks. Too often what we see if talks dominated by men with guns who have very little interest to negotiate for community level security that equally benefits men and women,” said Ingibjorg Gisladottir, UN Women Regional Director for Europe and Central Asia and Representative to Turkey.

In preparation for the 15th year commemoration of the resolution in 2015, the UN Secretary General commissioned a Global Study on the implementation of resolution 1325. The report brought together research which unquestionably demonstrated that women’s empowerment and gender equality contribute to a successful conclusion of peace talks, foster sustainable peace, accelerate economic recovery, strengthen protection efforts of peace operations and humanitarian assistance, and prevent and counter violent extremism.

Too few women sit in peace negotiations or have senior positions in political, peace and security institutions. This is despite the findings of the Global Study that women’s participation increases the probability of a peace agreement lasting at least two years by 20 percent, and by 35 percent the probability of a peace agreement lasting 15 years. Unfortunately in 15 of 16 national dialogues examined by the Global Study, decision-making was left to a small group of male leaders.

Going over the key recommendations of the Global Study, the workshop allowed activists and government representatives from 13 different countries to share their experiences and expertise in peace-building, conflict resolution and post-conflict recovery in their respective regions and cultivate new ideas and steps to improve their advocacy to advance gender equality in peace, security and humanitarian action. 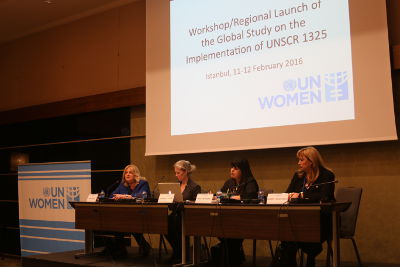 Participants described the challenges and opportunities they faced in developing, implementing and monitoring National Actions Plans (NAPs) on resolution 1325. They called for effective implementation and better monitoring of NAPs as well as the participation of women in peace negotiations from the beginning of the processes through mandatory quotas, stronger inclusion of women in politics and decision-making, and adequate financing of women’s organizations working in peace and security.

By sharing lessons learned, women’s activists also identified specific ways to cooperate more closely and support each other to respond more effectively to new threats, such as the armed conflict in Ukraine and the rise of violent extremist groups like Daesh. Participants also spoke about how they have addressed difficult issues such as conflict related sexual violence and providing emergency assistance to refugees and migrants.

The meeting also involved the senior gender advisers of the EU and the OSCE, a strong signal of Europe’s main regional organizations’ common commitment to increasing women’s engagement in peace and security issues. Calling the workshop a “platform of ideas that warrant a follow-up”, and an “immense enrichment” to their work, representatives of international institutions voiced their continued support for regional efforts to examine the gender aspects of the peace and security issues discussed in the meetings.

Moving forward, the network of activists and leaders brought together by this event agreed to cooperate to advance women’s participation in peace, security and humanitarian action, and to contextualize the Global Study findings and recommendations on a local level.