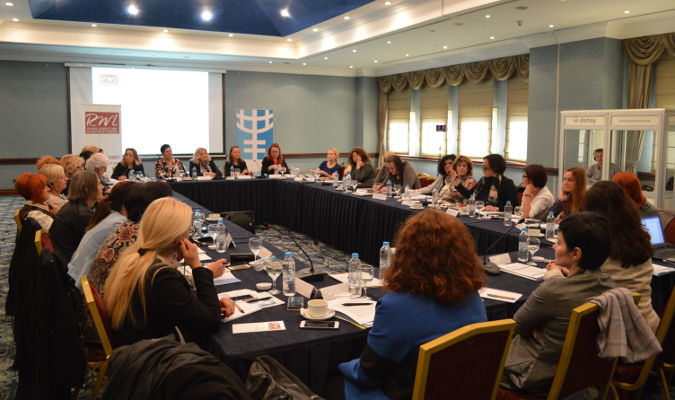 (Istanbul, 16 November 2018) – Women politicians, members of parliaments, diplomats and civil society representatives from across the Western Balkans together with UN Women, made a strong call for women’s equal participation in peace and security processes.

The conference in Istanbul, highlighted the underrepresentation of women in peacebuilding and democratic governance in the Balkans. Women shared their visions, experiences, challenges, successes and agreed on common goals. They identified obstacles hindering the peacebuilding processes and reconciliation, agreed to withstand them.

Edita Tahiri, a Kosovan politician who was the only woman negotiator in the Balkans during and post conflict said, “There are challenges for women but my experience in international peace negotiations in the past 20 years, surrounded by men, show that women can make a huge difference and breakthrough in reaching peace agreement. Women can manage men’s egos, which may become harmful in reaching peace deals.”

Attendees expressed concerns about current security challenges in the region and called for urgent responses.

“Despite all the efforts to stabilize the region for years, regrettably we nowadays observe tendencies to reaffirm criminal policies of the past and even war criminals. We, women from Balkans must take strong position to condemn such policies and policy makers. Sonja Biserko, Head of Helsinki Committee for Human Rights, Serbia said.

Participants agreed that stability and EU integration is needed to prevent the negative trends getting visible in the region. Women from across the region, including from Bosnia, Kosovo[1], Croatia, Serbia, Montenegro, the former Yugoslav Republic of Macedonia and Albania emphasized that it is crucial to move beyond commitments and make gender-inclusive peace processes a reality.

UN Women Representative Flora Macula said, “I was in Kosovo during the war and now in Bangladesh working with refugees from Myanmar. I see that women are not yet on the table, this must change.”

All urged for the effective implementation of UN resolutions on Women, Peace and Security.

“Women affected by war are the biggest advocates for peace. They should not be left alone,” said Memnuna Zvizdić, a Bosnian activist.

Local peace-building through empowerment of women was considered a critical process in the consolidation of peace and prosperity. The participants thus reaffirmed their commitments to continue working for bottom-up peacebuilding. Regional cooperation of women is serving as a driving force for reconciliation, development and European integration.

The conference also addressed the relevance of women’s access to justice and transitional justice with a focus on women survivors of conflict-related sexual violence (CRSV), stating that international justice should be put in place and perpetrators punished for durable peace. “Access to justice for survivors of CRSV is an urgent priority for women all over the Balkans. RWLSEE is helping forge a unified path toward justice and empowerment,” said Maxine Marcus, International War Crimes Prosecutor.

Women diplomats attending the Conference, Ulrika Richardson, UN Resident Coordinator for Kosovo and Karin Hernmarck Ahliny, Swedish Ambassador in Kosovo, congratulated RWLSEE for its efforts and dedication to advance gender equality and push for a future in which women and men will stand side by side to achieve and preserve stability and peace. “We encourage you to stay in course and continue your noble and peacebuilding mission,” they affirmed.

Regional Women’s Lobby in Southeast Europe (RWLSEE) continuously advocates for enhanced collaboration among women from the Western Balkans and increased empowerment of women in democratic governance and peace-building processes.