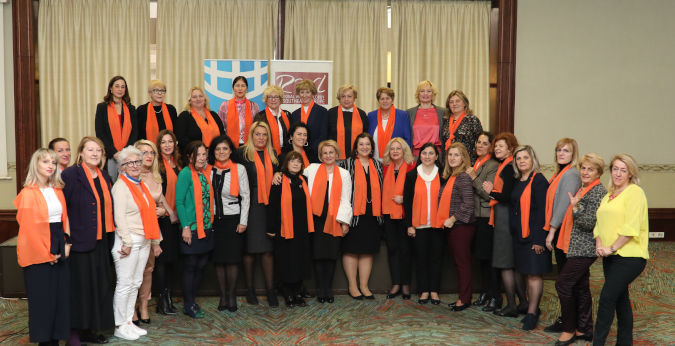 Skopje, 28 November 2019 – Ahead of the 25th anniversary of the Beijing Declaration and Platform for Action (Beijing+25), the Regional Women’s Lobby in Southeast Europe (RWLSEE) and UN Women held an International Conference in Skopje, the capital of North Macedonia, as part of a Swedish Government supported initiative aimed at supporting peace-building efforts in Kosovo[1] and the entire Western Balkans region.

Conference participants discussed achievements and challenges in women’s empowerment and gender equality in the Western Balkans during the last 25 years since the adoption of the Beijing Platform. They focused on decision-making, peace-building, security and justice, where women face specific challenges given the Region’s specific post-conflict context.

Calls for meaningful support for women’s empowerment and gender equality in post-conflict regions, such as the Western Balkans, are necessary as women have shown to be peace drivers. Such action is much-needed in the Western Balkans as it continues to experience fragile peace, unconsolidated democracy, and new dangerous security challenges that threaten to harm the progress gained over the past 20 years.

Edita Tahiri, the chair of RWLSEE, stated that the Western Balkans region was forgotten and over-shadowed by the tragedies and wars it had experienced. She also emphasized that women’s role in working for peace-building and reconciliation was also insufficiently recognized. “Now is the time to empower women in the Balkans and beyond, as only gender equality can deliver a safe future, development and a gender inclusive and just society,” said Ms. Tahiri.

Alia El Yassir, UN Women Regional Director for Europe and Central Asia, stated that UN Women highly values the crucial role of women for peace, stability and prosperity. She also emphasized UN Women’s commitment to strengthening support for women in post-conflict regions where women and girls had experienced a complex set of challenges. She also said that UN Women will continue its partnership with the RWLSEE and praised the Lobby’s work. “We are proud of the dedicated work of RWLSEE towards the women, peace and security agenda, and we expect that Beijing+25 and UNSCR 1325 +20 will bring ground-breaking changes for achieving gender equality,” she said.

The Conference findings will generate recommendations for closing the gap in gender equality in the Region and will provide a regional input for the Beijing+25 and UNSCR1325+20, aligned with the agendas of Sustainable Development Goals 2030 and UN Women’s Generation Equality campaign.

2020 will mark the 25th anniversary of the Beijing Declaration and Platform for Action, the 20th anniversary of the UN Security Council Resolution on Women, Peace and Security (UNSCR 1325) and also the 5-year milestone towards achieving the 2030 Agenda of Sustainable Development Goals (SDGs).

Women consider that these anniversaries present a critical moment to accelerate the implementation of their common goals for women’s meaningful empowerment and gender equality and its contribution towards building a peaceful, democratic, stable, prosperous, European and Euro-Atlantic future of the region. Participants stressed the need to urgently assess the current barriers standing in the way of rolling out these international platforms in the Western Balkans, which still faces an unfinished peace, fragile democracy and security, corruption, as well as unemployment.

RWLSEE continuously advocates for enhanced collaboration among women from the Western Balkans and increased empowerment of women in democratic governance and peace-building processes.

Related News
11/10/2019
Ask an activist: What is your message to the new generation of women and men activists?
18/06/2021
Take Five: “Social norms and ethical systems need to change to improve gender equality”
25/10/2019
In the words of Ema Andrea: “Gender equality means coexistence between women and men, not a competition”
03/10/2019
North Macedonia hosts third sub-regional consultation on 25 years of commitments to gender equality
01/10/2019
In the words of Milesa Milinkovic: “We need to be supportive in activism for the rights of women with disabilities”
END_OF_DOCUMENT_TOKEN_TO_BE_REPLACED