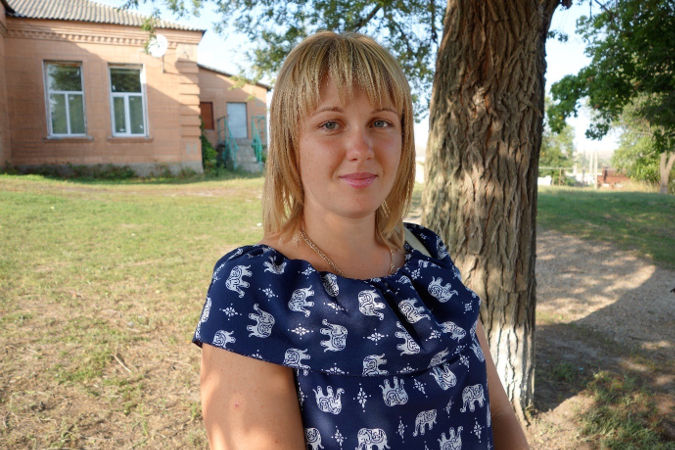 Inna Urtaieva was 30 years old, and pregnant with her son when she had to leave her home town in the Luhansk region of eastern Ukraine when the armed conflict broke out in April 2014. Urtaieva moved to her parent’s house in Levsuh, a small village of around one thousand inhabitants in Luhansk region, a Government-Controlled Area, leaving behind her husband and career as a police officer.

“I didn’t know what to do here,” says Urtaieva, “I couldn’t have moved to the larger towns where there were more job opportunities, because I wouldn’t have been able to survive without the support from my parents.” She can hardly speak to her husband, who is also a police officer and was at work when the government forces lost control of Stanytsia Luhanska, about her situation. “We communicate regularly but can’t live as a family,” she says with tears in her eyes.

In April 2014, anti-government armed groups seized some parts of the Donetsk and Luhansk regions in eastern Ukraine, prompting the Government to launch an anti-terrorist operation. The fighting continues to date, despite various ceasefire agreements. The conflict has led to instability, profound insecurity and had a significant detrimental impact on human welfare and social and economic conditions. Women and girls were disproportionally affected by the on-going conflict and the enduring social and economic crisis in Ukraine. Women make up a majority of the internally-displaced population. The social support services have collapsed or significantly decreased, leaving many women to care for the older, persons with disabilities and other vulnerable family members, thus limiting their employment opportunities.

Three years after fleeing her home, Urtaieva became part of a women’s self-help group in her village. After learning about gender-responsive planning and budgeting, through trainings supported by UN Women, Urtaieva and other women became inspired to contribute further to the community through creating a non-governmental organization to advocate with the local authorities for the inclusion of women’s specific needs into the local programme and budgets.

Urtaieva, who has a master’s degree in law, took a lead in providing legal support for the registration of the NGO. “I really feel needed,” says Urtaieva and hopes that she has now found her path to serving her community and providing for her son.

UN Women and partners applied the community mobilization for empowerment methodology in conflict-affected areas, mobilizing women and men from vulnerable groups for their increased participation in decision-making processes regarding local development, services, recovery, and community security. These efforts are part of the UN Women-UNDP joint programme, “Restoration of Governance and Reconciliation in Crisis-Affected Communities of Ukraine”, funded by the European Union, which aims to support regional and local governments in developing inclusive and gender-responsive recovery and development planning and service delivery. The programme also supports gender equality advocates and women affected by conflict in demanding accountability and transparency in local decision-making processes.

“It wasn’t easy to convince local women that they can become change-makers,” says Olesya Bondar, Director of the Ukrainian Women’s Fund, a local partner in this programme which has facilitated the creation of 58 self-help groups, like the one Urtaieva joined, in conflict-affected areas. “We spent hours talking, giving examples of how, in similar situations, people found ways to improve the lives of their communities. After receiving the necessary skills and knowledge, they started having meetings on their own to discuss their problems and the process of empowerment began,” says Bondar.

The programme also trained women on gender analysis of the needs of the most vulnerable community members in the process of local development and the decentralization reform, which aims to create an effective system of local government that has the capacity and resources to adequately address local needs.

“We understood how important it is to involve everyone in the development process,” says Iryna Baryshenko, a local businesswoman and one of the founders of the self-help group. “For instance, my niece, Tanya [shortened version of Tetiana], has always been excluded from the community because of her disability. Now she participates in everything we are planning here: infrastructure projects, local festivals, like open-air cinema, pavement improvements, everything.” 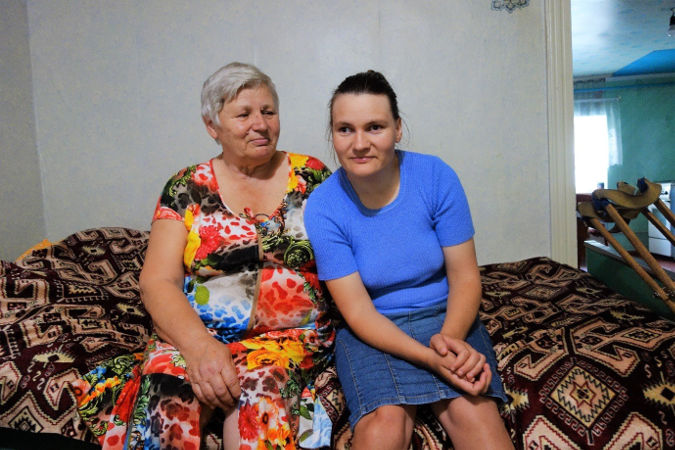 Diagnosed with cerebral palsy at birth, Tetiana Rozdymakha, Baryshenko’s 34-year-old niece, never attended school because of lack of inclusive education opportunities for children with special needs. She stayed at home, isolated from peers and public life, mostly spending time with her mother, a cancer survivor. “I read all the time. Now that the self-help group is active in the village, my voice is heard as well,” says Rozdymakha.

Rozdymakha actively participates in discussions about planning of local programmes and budgets. She started to advocate for the needs of people with disabilities in her community with the decision makers. Their challenges include barriers in accessing infrastructure; especially public buildings, transportation, educational institutions and health and social-care facilities.

Recently a pavement in the centre of the village was repaired, marking the beginning for improving the infrastructure in Levsuh. “We must do our best to make our village accessible for people like Tanya,” says Baryshenko.

Related News
15/02/2016
Peace activists call for more women in peace negotiations and the security sector
15/02/2016
Regional gathering helps foster women’s solidarity in their push for peace in Europe and Central Asia
20/05/2022
Meet Yaroslav, a young Ukrainian refugee with disabilities who dreams of becoming a DJ
19/05/2022
Interview: “The war in Ukraine may be changing the women’s movement, but it’s not stopping it”
04/05/2022
Ukraine: New UN Women and CARE report highlights disproportionate impact of the war on women and minorities
END_OF_DOCUMENT_TOKEN_TO_BE_REPLACED