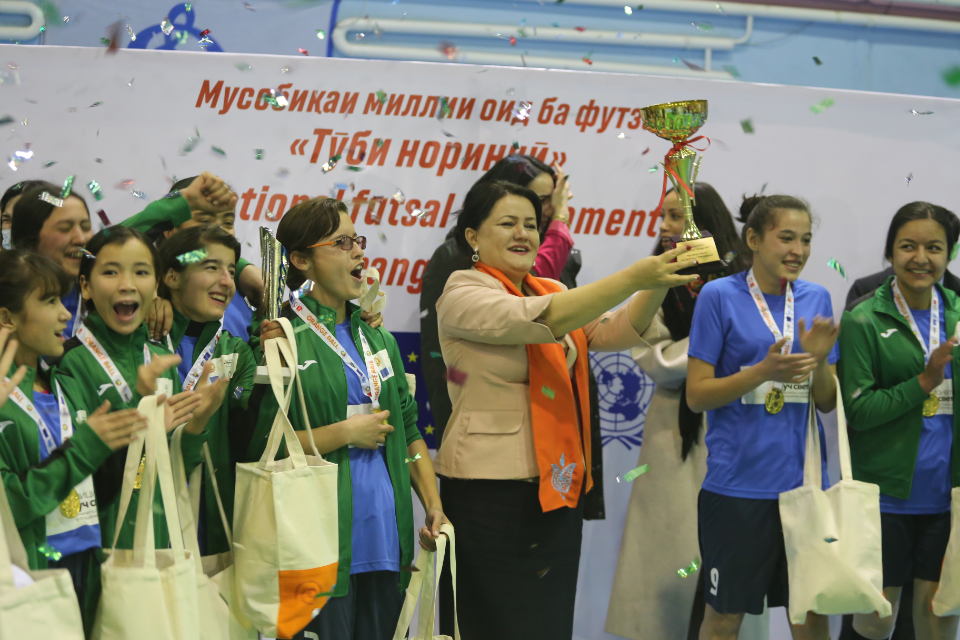 Zarrina Abdulmainzoda, Deputy Chairperson of the  Committee on Women and Family Affairs under the Government of Tajikistan and the players of the Khatlon team celebrating their victory at the Orange Ball award ceremony. Photo: UN Women

The closing ceremony of the 16 Days of Activism campaign and the final match of the “Orange Ball” girls futsal tournament (a modified form of soccer, with five players per side) were held in Dushanbe on 10 December with the support of the Spotlight Initiative programme in Tajikistan in partnership with the Tajik Professional Futsal League.

“Today we celebrate International Human Rights Day, and the theme is ‘Equality’,” said Sinanoglu in her opening remarks. “We don’t have to all look the same, speak the same, or act the same, but we all should have the same opportunities, same chances in our personal and professional lives and the same rights, regardless of who we are and what we do.”

The “Orange Ball” national futsal tournament was held among 224 girls aged 13–17 years old, with regional and national-level games. Its key mission was to encourage more girls to engage in sports, particularly futsal while encouraging equal opportunities and breaking gender-based stereotypes.

In the final match, the Khatlon team won 4-1 over the J. Rasulov team, with the Regar Tadaz team earning a bronze-medal win over the Farkhor team.

All tournament participants received high-quality athletic apparel kits and sports accessories to motivate them to participate further. Players with higher performance levels will have an opportunity to play for the Tajik National Team in the Central Asian Football Association tournament in 2022.

Another highlight of the event was a mobile theater show performed by Youth Peer Education Network volunteers, promoting the idea of a life free from gender-based and domestic violence.

The 16 Days of Activism against Gender-Based Violence is an annual international campaign that kicks off on 25 November, the International Day for the Elimination of Violence against Women, and runs until 10 December, Human Rights Day. Over 50 organizations of all types in almost every region of Tajikistan participated in the campaign in 2021 through more than 90 events of various types and scales, covering at least a quarter a million people. This year’s campaign objectives were to facilitate dialogue and action, change attitudes, reduce gender-based stereotypes and highlight joint progress.

Related News
05/12/2012
UN Women held a round table to announce nomination of the President of Tajikistan Taekwondo Federation to the UNiTE campaign Network of Men Leaders and call other sport federations to support and join the campaign
05/09/2012
National Taekwondo and kickboxing Federation of the Republic of Tajikistan conducted outreach activities within the "Orange Day" campaign at the World Taekwondo championship in Tallinn
14/09/2011
Tajikistan Taekwondo Federation promotes zero tolerance to VAW
02/12/2021
I am Generation Equality: Amiran Karatsev, advocate for women’s rights and feminism
01/12/2021
Call for Proposals: Community mobilization on gender equality and prevention of violence against women and girls
END_OF_DOCUMENT_TOKEN_TO_BE_REPLACED