From Where I Stand: “I wish to go back to Syria when the war ends as a new, transformed person”

Rafif Hamami is a 36-year-old Syrian refugee who has been living in Izmir, on the western coast of Turkey, with her husband and son since 2014. She explains how the MUDEM Refugee Support Centre (MUDEM-RSC), one of UN Women’s partners in empowering Syrian refugee and local women, helped her build self-confidence, take up new skills and develop existing ones to hold onto life. 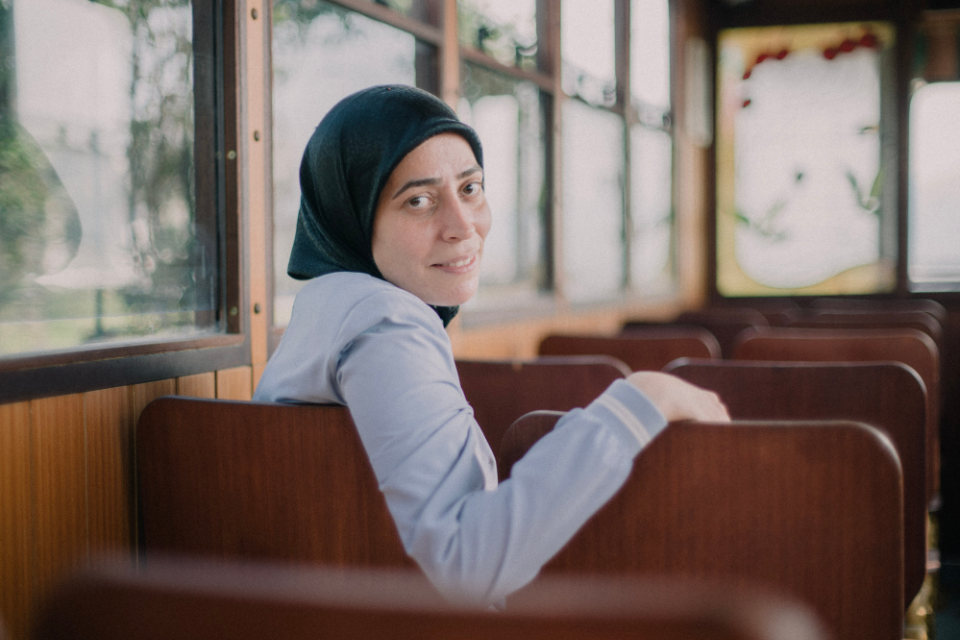 Having set off in a new direction with her life using her newly acquired skills, Rafif Hamami, a 36-year-old Syrian refugee, says, “I aim to move forward.” Photo: UN Women/İlkin Eskipehlivan

I was a special education teacher focusing on hearing disabilities in Aleppo, Syria, before war broke out and we moved to Turkey. I really enjoyed my job and was disappointed when I realised that it would not be possible for me to practice my profession in Turkey due to the language barrier. For this reason, I had to put my profession aside and focus on other income generating activities. But, it was so hard to find a job without the necessary skills. It was not enough for my husband to work in technical support roles to put food on the table. While I was desperately trying to figure out what to do, I decided to get support from MUDEM-RSC, thanks to a recommendation from a friend in our neighbourhood.

At this women-only centre, I participated in various skills development courses and joined the Havva Women’s Committee. Through my role at the network, I became both productive and social. I was hardly in touch with people before. I quit my work at the network a couple of times because of my low self-confidence. I was criticizing myself thinking that nobody would like my work, however, my self-confidence started to grow when I started receiving positive feedback from the women I worked with. I was able to learn new things from them and teach my own know-how, not only from a technical perspective, but also from other aspects of life. This exchange helped them learn my knowledge about working with children who have hearing disabilities as I could help with some kids and I decided not to give up on that.

My son is 11 years old now and has a strong understanding of what it is like to have a working mother who shares the burden of life with her partner. He knows the vitality of having skills that can help one stand on their own feet. I am glad that I was able to inspire him with the image of a working mother. He understood from a young age that both men and women should take their part in life as equals.

Resettling in a new country has been challenging, but I have a hope. We do not know what life will bring. I wish to go back to Syria when the war ends as a new transformed person who can open up her own special education centre. The women’s leadership trainings I’ve taken helped me develop this idea.

I have restarted my life and I aim to move forward. This is not to show off to others but to prove to myself I am capable enough.”

Rafif Hamami once worked as a special education teacher to support children with hearing disability in Syria. She is now getting trained to become a community leader under the Home to Home Solidarity Programme, which provides support to vulnerable Syrian and Turkish women to access healthcare, legal assistance, vocational trainings, psycho-social and livelihood support. The initiative is funded by the Government of Japan and implemented by UN Women in partnership with MUDEM-RSC.

Related News
22/09/2021
In the words of: “It takes time for a refugee to understand the world outside their home, but it is possible to feel safe and have hope for the future”
31/08/2021
In the words of Sibel Sultan Garip: “Giving a hand to other women and helping them to feel meaningful fulfils me”
19/06/2019
Compelled and empowered, Syrian refugees changing traditional gender norms
09/12/2021
In the words of Müge Yamanyılmaz: “Women’s lives can be changed by sharing our knowledge and experience with other women”
08/09/2021
Roma, Ashkali and Egyptian communities in Kosovo tackle a centuries-old harmful phenomenon
END_OF_DOCUMENT_TOKEN_TO_BE_REPLACED