Turkey continues to host the largest refugee population in the world with more than 3.6 million Syrians registered under Temporary Protection Status. Since 2017, UN Women has been providing refugees and local women with livelihood, psycho-social, referral support and vocational training at the SADA Empowerment and Solidarity Centre in Gaziantep, a southeastern Turkish province near the border with Syria. 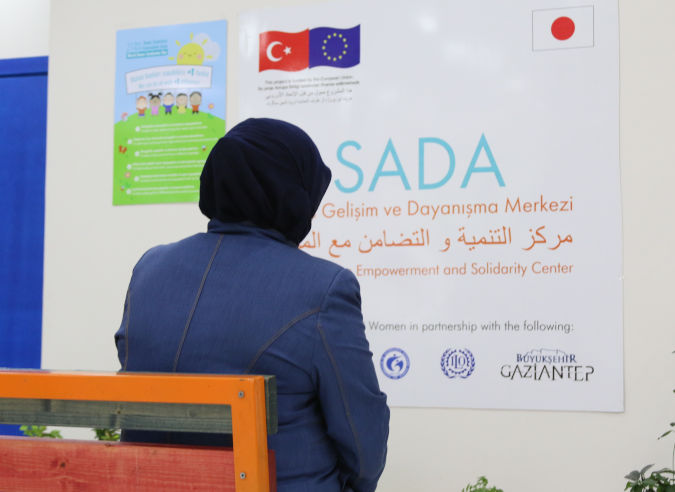 Zehra Abdullah was at her home with her children in the north of Aleppo, when a bomb crashed into a neighbour’s home in 2015, killing her husband. “After I was married off at 14, I always stayed at home, raising my children and doing housework. Suddenly, my family’s life was all on my shoulders,” she said.

Zehra and children crossed into Turkey and settled in Gaziantep, a southeastern Turkish province, home to more than 420,000 Syrians under Temporary Protection Status.

But life wasn’t easy. “We scraped by, could count on no one. I didn’t know the language and had no income,” said Zehra. “I even thought of marrying off my 12-year-old daughter.”

Things took a turn for the better after she joined over 5,000 refugee and local women by registering at UN Women’s SADA Women-only Centre in Gaziantep. She began learning new skills and Turkish, and forged friendships that sustained and empowered her.

Set up in 2017 and funded by the European Union Regional Trust Fund in Response to the Syrian Crisis and the Government of Japan, in partnership with the Gaziantep Metropolitan Government, the ILO and the Association for Solidarity with Asylum Seekers and Migrants (SGDD-ASAM), the SADA Centre offers both refugee and local women outreach, psycho-social and referral services, and language and vocational training. 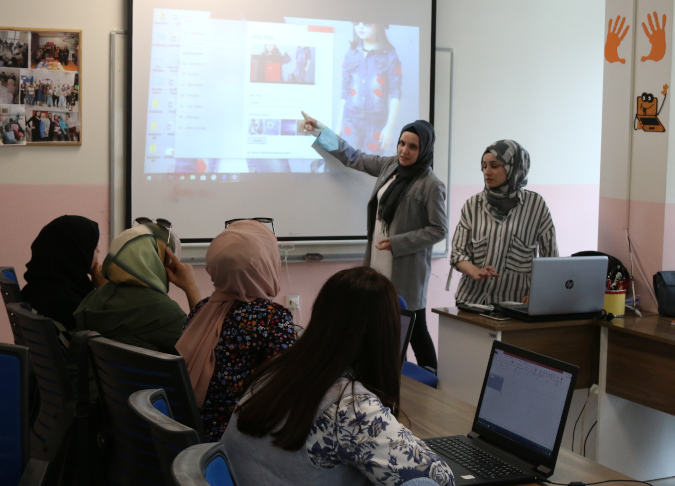 “In my neighbourhood in Syria, women had few rights and seldom left their homes. At SADA, I am learning new skills that I hope will generate income to support my family. I can go out and share problems with other students,” said Zehra, who plans to open a hair-dressing salon after completing training at the Centre.

Since coming to the Centre, Zehra has scrapped the idea of marrying off her daughter: “I constantly cried after my husband’s death. Now I am stronger and so are my children. Girls should not just be protected by men. They should study and work and learn to stand on their own feet.”

By March 2019, more than 2,100 women completed Turkish language and vocational training courses, including tailoring, shoe-making and packaging lessons at SADA. After job counselling and entrepreneurship support, some opened a business or landed a job. Women are also expected to benefit from a cooperative recently established at the Centre by selling products they manufactured.

According to UN Women’s Needs Assessment of Syrian Women and Girls under Temporary Protection Status in Turkey, only 15 percent of surveyed Syrian women have income-generating jobs,

Traditional gender roles, care-work, language barriers and market conditions, are preventing many women from joining the workforce, according to experts, who also highlighted the vulnerability of displaced women to gender-based violence. 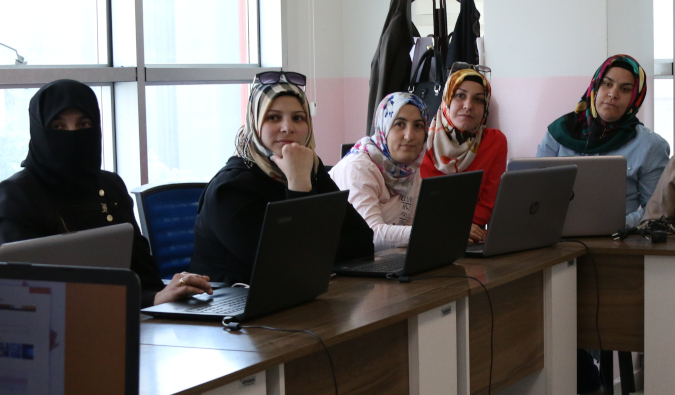 “In times of crisis, women’s rights are one of the most difficult rights to be protected. When having gone through domestic violence and sexual abuse, many women arrive here hopeless,” said Seda Dolaner, project coordinator at the SADA Centre. “We tell them they have rights and violence is not their destiny. This shocks many at first, but our efforts are bearing fruit: Women now talk about their dreams and some have become financially independent.”

It is not just women transforming, according to Bilge Çoban, Field Coordination Officer at the ILO Office for Turkey, UN Women’s partner, who noted a seminar on male engagement drew “unexpectedly strong” interest from male family members of women registered at the SADA Centre.

“Many Syrian men find it hard to earn decent income here. That reality is pushing them to change their conservative gender views. They want to support their wives working but also wish to be assured that it is OK and in line with their religious beliefs,” she said.

In addition to empowering refugee women, the center, which also serves Turkish women, has strengthened links between the local and refugee communities, said Önder Yalçın, the chief of Migration Division, Gaziantep Metropolitan Municipality. “Syrians staying in Turkey is a long-term reality. That’s why their social and economic integration is very important for us. Some women keep in touch even after finishing their engagement at the SADA Center. The Centre has created a great chance for refugees and locals to understand and support each other,” he said.

“The SADA Centre is widely recognized as a very successful model,” said Iris Bjorg Kristjansdottir, Gender and Humanitarian Specialist at UN Women’s Europe and Central Asia Regional Office. “If women are empowered to contribute and participate in the labor market and social life, it can lead to significant change, not only for the family but for the overall society.”

“In addition, it can strengthen social cohesion and decrease tension between groups. Furthermore, it can increase the likelihood of female-headed households to be economically self-reliant in the longer term, improving the wellbeing and future opportunities of their families,” she said.

* Name has been changed to protect the identity of the individual.